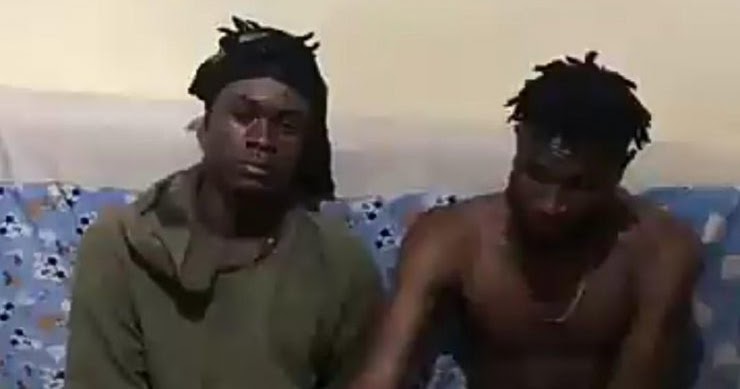 The two suspected robbers allegedly disposed of an Uber driver, identified simply as Utibe, of his Toyota Corolla car, in the Ibeju-Lekki area of the state.

The Punch reports that the suspects had ordered a ride from a driver who works with a car-hailing company, Bolt, around the Lagos Business School area of the state.

While on their way to their destination, Utibe’s friend, @sama_on_point, chronicled on Twitter that the suspects brought out sharp objects, stabbed the driver and absconded with his vehicle.

He stated that the car stopped abruptly on the way, adding that the suspects thought fuel had finished in the vehicle and slept in it until the police tracked them to the location.

The tweet read, “This guy below is my friend’s driver. A ride was ordered at about 8:40 pm on Sunday, Sept 20, 2020. He arrived at the pickup location just after Lagos Business School at about 9 pm. As he started the trip, the 2 guys (riders) stabbed the driver and drove off with the car.

“These 2 criminals below are the riders that stabbed the driver and snatched the car. They drove off to the Ibeju Lekki axis. Unknowing to the criminals, the car had a tracker. The tracker was used to switch off the engine. The fools thought it was fuel.

“From the tracker’s voice recording, the car snatchers thought it was a fuel shortage. They had no money to buy fuel, so they decided to sleep in the car till morning as it was very late at night. The Police followed the GPS and arrested the criminals sleeping right inside the car!”

A picture attached to the post showed the driver’s shirt soaked in his blood due to the deep cut he sustained on his face during the attack.

He said, “On the receipt of the distress call, the Area Commander, Area ‘J’, Ajah, dispatched a team to the scene and traced the snatched car to the Mayfair Garden, Ibeju Lekki, where the suspects were arrested. The driver was rescued and the car recovered.

“The police also recovered one axe stained with blood and one knife from the suspects. The driver, who was seriously injured, is receiving treatment at a hospital in Lagos State.

“The Commissioner of Police, Hakeem Odumosu, has ordered a discreet investigation into the case, while he warned those, who are planning to engage in criminal acts or have been involved in one crime or the other, to desist and flee Lagos State.”

APC Will No Longer Respond To Statements From PDP – Publicity Secretary