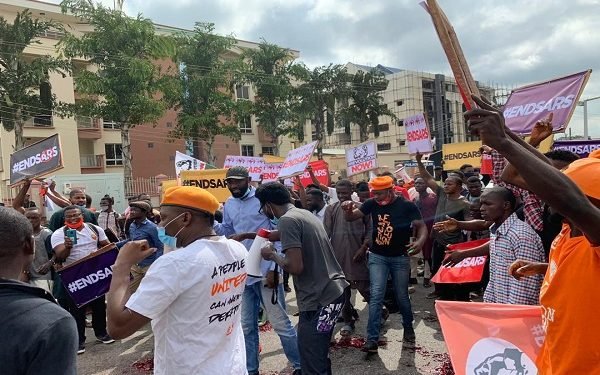 #EndSARS protesters in Lagos led by popular entertainers, Folarin Falana, popularly known as Falz, and Runtown, have been dispersed by Nigeria Police in Lagos.

At the same time, #EndSARS protesters have besieged the force headquarters in Abuja demanding the reformation of the Special Anti-Robbery Squad. However, the police gave the Abuja protesters all the necessary understanding to have a peaceful protest, unlike Lagos.

But in Lagos, the #EndSARS protesters who were demanding the dismantling of the Special Ant-Robbery Response Squad (SARS) unit of the police were dispersed by the police.

The protest, which kicked off on Wednesday in Ikeja, was extended to Lekki toll gate opposite Oriental Hotel.

Seeing this approach,  Folarin Falana, popularly known as Falz, and Runtown, have led a protest in Lagos State against police brutality and extortion.

The protest took place in the Lekki area of Lagos on Thursday.

During the protest, youths were seen carrying placards and chanting #EndSARS.

Inscriptions on some of the placards read, ‘Enough is Enough’ and ‘We are all victims’.

Both Falz and Runtown counselled the protesters not to be violent as they engaged security operatives who attempted to disrupt the protest.

In an Instagram live chat before the protest, Falz, son of human rights activist, Femi Falana, said, “No backing down. We move. The police are already there, waiting for us but we are not here to cause trouble. It is a peaceful protest. Coming through.”