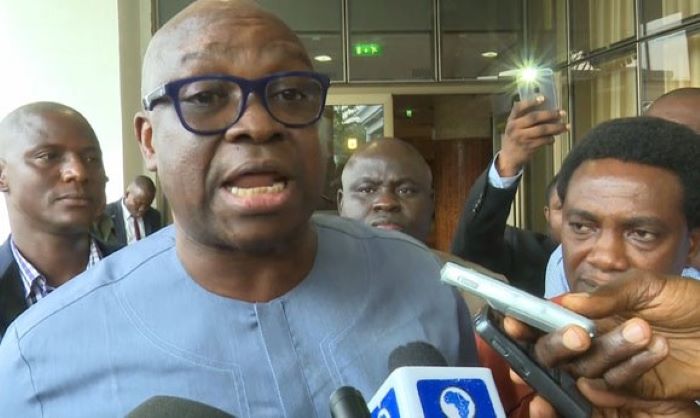 “That’s how late Chief Bola Ige’s cap was removed in Ile-Ife, Osun State then and we all know what happened later. “ Mr Ayodele Fayose, made this statement after his cap was removed by thugs at the Peoples Democratic Party campaign rally for the Ondo State governorship election in Ondo town.

He said he rejects the death that follows Bola Ige after his cap was removed in Ile-Ife, Osun State in 2001.

The video in circulation online shows Fayose was making his way to the podium at the campaign ground when some hoodlums moved towards him and removed his cap.

In his reaction to the public ignominy, Fayose said:  “It was not something to be handled with levity as security agencies will have to unravel all the thugs brought to the event and their sponsors”.

Fayose said despite “the shameful act”, he “won’t stop saying the truth concerning the running of the party in the South-West zone and those who have failed to produce any result in Lagos State since 1999 will be made to retire.”

Fayose in a statement through his Media Aide, Lere Olayinka, said, “That’s how late Chief Bola Ige’s cap was removed in Ile-Ife, Osun State then and we all know what happened later.

“So this one will not be ignored and treated as one of those things.

“The masterminds had it all planned and they followed it up by celebrating what they saw as the success of their plot. They even capped it up by circulating the video.

“So it was not an accident, it was planned. But those who planned it only succeeded in advertising their political myopia because the popularity of the brand Ayo Fayose, Osokomole cannot be rubbished by such a childish act.

“That they must have seen in the reaction of the people at the rally and I am sure they know that they can’t get such loud ovation even if they spend all the money in this world.

Huawei Releases Banking Resilience Index for 2020 and Beyond

AGF Says He Could Not Ask DSS to Release Sowore