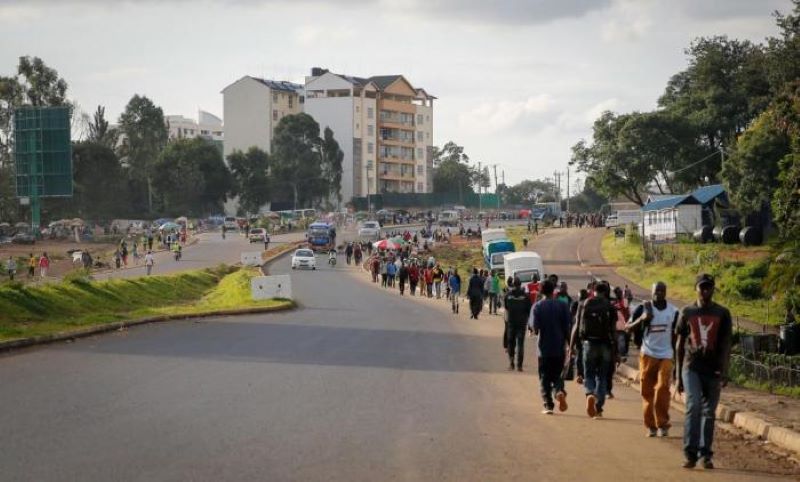 Through the National Hygiene Program, Kenya has offered a lifeline to more than 250,000 youth hurt by COVID-19 response measures.

The social protection program has transformed to provide sustainable work activities expected to last beyond life of the program.

More than $92 million (Ksh10 billion) has been invested in the game-changer program that has brought positive social impact to the country’s informal settlements.

Following the first confirmed COVID-19 (coronavirus) case in Kenya in March 2020, the government swung into action and implemented containment policies that were aimed at reducing the spread of the virus across the country.

Like many countries across the globe, efforts to minimize the spread of the virus sent Kenya’s economy into turmoil as widespread shutdowns were imposed to minimize the spread of the virus through human contact. As a result, many people, particularly communities in informal settlements, were massively affected by the partial lockdown. Already a vulnerable group owing to the high poverty and ever rising unemployment levels they face, the contraction of the economy brought more pain to them as it further affected their ability to meet their basic needs. Households were hit by massive joblessness, as many people who mostly work as casual laborers lost their jobs, adding to their desperation.

To support low-income workers during this time of limited movement, the government created the National Hygiene Program to provide employment opportunities with daily wages. The program, commonly known as Kazi Mtaani (loosely translated as jobs in our hood), includes labor-intensive works such as street and drainage cleaning, garbage collection, bush clearance, fumigation and disinfection, while ensuring clean environs and improved urban infrastructure and service delivery.

“Kazi Mtaani has been a game changer for so many families across the country particularly at a time when the economy has contracted due to the ongoing COVID-19 pandemic,” said Charles Hinga, Principal Secretary State Department for Housing and Urban Development. “We expect that many more lives will be impacted positively in next six months and beyond. We are already training the workers in road construction, and house making using Interlocking Stabilized Soil Blocks technology to take up new opportunities under community contracting to ensure sustainability of the program beyond the six months.”

In Phase 1 of the program, which ran from April 29, 2020 to June 2, 2020, more than 26,000 jobs were created under the Kenya Informal Settlements Improvement Project, at a cost of about $3 million. Jobs were created in 27 settlements across the eight counties—Nairobi, Mombasa, Kiambu, Nakuru, Kisumu, Kilifi, Kwale, and Mandera—most severely constrained by the restricted movements at that time. Two additional settlements—Old Town in Mombasa and Eastleigh in Nairobi—were added to the areas that benefited from the program. Under Phase 1, youth enlisted in the program earned a daily wage of Kshs. 600 (~$5.5) paid through mobile money transfer.

“As youth from Kibra, we are very grateful to the government for launching this program because it is not only enabling us to fend for our families and settle our bills, but it is also ensuring that young people are less idle as they are engaged at work during the day which has significantly minimized crime rates in our area,” said Byron Mashu, who lives in Kibera in Nairobi.

The program’s multiplier effect has equally been significant. Cumulatively, the funds have helped spur the local economies leading to improved livelihoods for the residents of the participating informal settlements. Additionally, the program has notably reduced crime and drug abuse cases, improved cleanliness and, government officers interact with the workers, and in some cases get involved in the clean-up exercises.

“We have seen the reduction of petty crimes and dependency on other people and our environs are clean,” said Don Dante, a youth leader from Mukuru Kwa Njenga slums who noted that he and many others can now afford to feed their families. “We hope to see more of these opportunities for a better Kenya.”

With the success of the first phase, the government has rolled out both Phase 1B and Phase 2, using its own financing, with another 283,210 workers recruited across all 47 counties in the country.

In Phase 2, planned to run for six months, Kazi Mtaani will focus more on sustainable work activities such as construction of public spaces and infrastructure such as schools, libraries, toilets, footpaths, painting and cobblestone roads paving. A hybrid of skilled and unskilled labor has therefore been engaged in a bid to ensure that the program delivers value post COVID-19. The benefits accruing from this program are essential to building the resilience of informal settlement dwellers both during the pandemic and after.