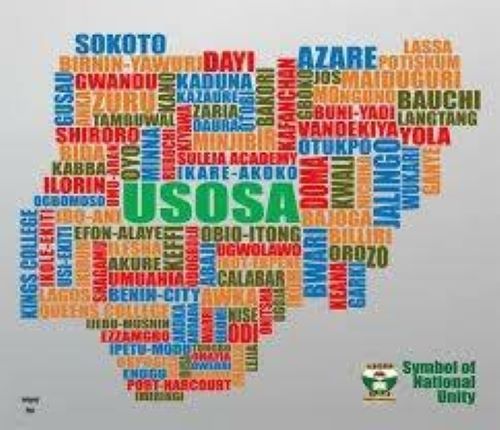 The leadership of the Unity Schools Old Students Association (USOSA), the umbrella body of all alumni associations of all 104 Federal Unity Schools has joined other well-meaning Nigerians to call on the Federal Government to ensure transformational reforms of the security architecture in Nigeria, especially the Nigerian Police.

This was made by the President-General of the Association, Lawrence Wilbert in a press statement issued from the USOSA Secretariat in Abuja last week.
This is in line with the citizens’ actions across the country, which has led to the disbandment of the Special Anti-Robbery Squad (SARS) across the country.

Wilbert stated that USOSA is in solidarity with all Nigerians across the country who have made their voices heard in the last week.
While condemning the use of force to silence peaceful protest as was seen in some states in the country, the USOSA President General emphasized that the bedrock of any modern and progressive democracy is institutions that protect the rights of individuals to life and liberty.

“One of the most important of these institutions is the Police, and it is obvious that a huge section of the public has lost trust in the Police to protect these rights, as can be seen in the extent and scale of the protests, “Wilbert said.

The call for #ENDSARS reignites the position of the Nigerian Constitution, which highlights Security and Welfare as the Primary responsibility of the Government.

Furthermore, while commending the swift response of the Federal Government in proscribing SARS and acquiescing to the demands of protesting Nigerians, Wilbert opined that this can only be the first in a number of steps required to restore public trust in the Police and by implication, the national security infrastructure.

“We encourage the government to be transparent, accountable and sincere with these reforms and fast track delivery of the 5for5 request of the protesters,” he said.

Adding her voice to that of the President General, the Publicity Secretary, USOSA Sotonye Apiafi also noted that the continued protests in spite of Government action are a reflection of the state of frustration and despondence across the nation, in which the issues of concern extend beyond police reforms to more fundamental issues relating to the disappearing opportunities for young people.

Others include unprecedented unemployment rates, galloping inflation and escalating poverty across the nation.

“This is made worse by the financial profligacy of the political class in the face of citizen penury. Other valid citizen concerns include the need for electoral reforms in order to strengthen electoral processes and guarantee the sanctity of the voice of the Nigerian people at future elections” Apiafi said.

At USOSA, the sincerity of purpose is critical to bridging the seeming trust deficit between the Nigerian people and their governments at all levels. In this light, U Wilbert called on Federal Government to take the following actions specified below to address the critical and burning issues relating to nation-building:

1. Take immediate concrete actions to demonstrate its long-term commitment to addressing the issue of police brutality in Nigeria by commencing the prosecution of all Police Officers who have been indicted for violence against Nigerian Citizens and Protesters.

2. Take concrete steps to reengineer the working and living conditions of the Nigerian Police Force to ensure greater motivation and professionalism within the Force, towards building a more secure Nigeria.

3. Take immediate steps to ensure a review of the Nigerian Constitution in order to address the issues of True Federalism, Resource Control and Electoral Reforms.

4.Take Immediate actions to address the size of Government by considering constitutional changes that will engender a unicameral legislature and a cut down in the number and remuneration of Government Officials and agencies to reflect the state of the national economy and identify with the sacrifices being made by millions of Nigerians.

Finally, Wilbert wishes to draw the attention of the government at different levels to the children currently in schools across the country, noting that the country owes them safety in the midst of the escalating global Covid-19 Pandemic, and owes itself the responsibility to re-orientate the citizen psyche through sincere, consistent investment in the educational sector.

He also commended President Buhari on the recently passed National Teachers Policy, which he stressed was a long overdue and welcome development, and encouraged the Federal Ministry to Education to immediately absorb all part-time teachers who are currently on the PTA payroll.

We believe that the safety of children in schools is a top priority for governments at all levels. This is a solemn duty of care, which we cannot afford to get wrong. As the largest coalition of Alumni Associations in Africa, we are happy to work with the Federal Government to leverage our network across the country to ensure the country delivers on this duty of care and safety for children currently in our schools.

USOSA will continue to support the Federal Government and the Nigerian People as we all
collaborate towards the attainment of the Nigeria of our dreams.