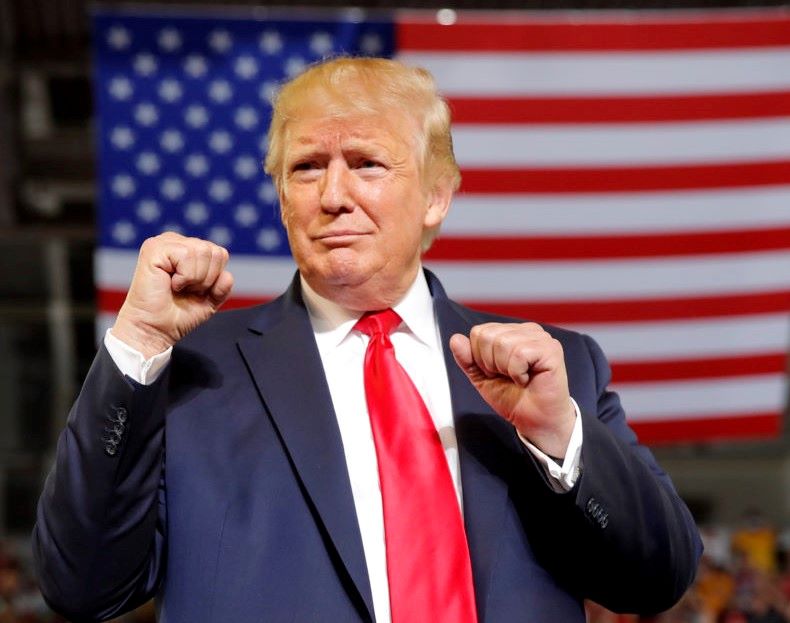 President Donald Trump, facing the prospect of leaving the White House in defeat in just 70 days, is harnessing the power of the federal government to resist the results of an election that he lost, something that no sitting president has done in American history.

In the latest sign of defiance, the president’s senior Cabinet secretary fueled concerns Tuesday that Trump would resist handing over power to President-elect Joe Biden after legal challenges to the vote. “There will be a smooth transition to a second Trump administration,” Secretary of State Mike Pompeo said.

Trump’s attorney general has at the same time authorized investigations into supposed vote fraud; his general services administrator has refused to give Biden’s team access to transition offices and resources guaranteed under law, and the White House is preparing a budget for next year as if Trump will be around to present it.

The president has also embarked on a shake-up of his administration, firing Defense Secretary Mark Esper as well as the heads of three other agencies while installing loyalists in key positions at the National Security Agency and the Pentagon. Allies expect more to come, including the possible dismissals of the directors of the FBI and the CIA.

But the rest of the world increasingly moved to accept Biden’s victory and prepared to work with him despite Trump’s refusal to acknowledge the results. Speaking with journalists, Biden called the president’s actions since Election Day “an embarrassment” that will not serve him well in the long run. “How can I say this tactfully?” Biden said. “It will not help the president’s legacy.”

The standoff left the United States in the position of the kind of country whose weak democratic processes it often criticizes. Rather than congratulating Biden and inviting him to the White House, as his predecessors traditionally have done after an election changed party control, Trump has been marshalling his administration and pressuring his Republican allies into acting as if the outcome were still uncertain, either out of faint hope of actually overturning the results or at least creating a narrative to explain his loss.

The president’s efforts to discredit with false claims both the election results and the incoming Biden administration is in many ways the culmination of four years of stocking the government with pliant appointees while undermining the credibility of other institutions in American life, including intelligence agencies, law enforcement authorities, the news media, technology companies, the federal government more broadly and now election officials in states across four time zones.

Throughout his presidency, Trump has tried to condition much of the American public not to believe anyone other than him, with evident success. Although the evidence shows there was no widespread conspiracy to steal the election in multiple states that Trump has invented, at least one poll showed that many supporters accept his claims. Seventy per cent of Republicans surveyed by Politico and Morning Consult said they did not believe the election was free and fair.

“What we have seen in the last week from the president more closely resembles the tactics of the kind of authoritarian leaders we follow,” said Michael J. Abramowitz, the president of Freedom House, a nonprofit organization that tracks democracy around the world. “I never would have imagined seeing something like this in America.”

Abramowitz doubted there was much danger of Trump overturning the election. “But by convincing a large part of the population that there was widespread fraud, he is seeding a myth that could endure for years and contribute to an erosion of public confidence in our electoral system,” he said.

Biden has proceeded without waiting for Trump’s concession and spoke on Tuesday with the leaders of Britain, France, Germany and Ireland. Most major world leaders have congratulated him on his victory, including close Trump allies like Prime Minister Benjamin Netanyahu of Israel. President Recep Tayyip Erdogan of Turkey, another Trump favourite, joined the chorus on Tuesday. The major holdouts remained Presidents Vladimir Putin of Russia and Xi Jinping of China.

Biden said he was not overly concerned with the Trump administration’s refusal to provide transition money, offices and access to agencies, insisting he could assemble a government by his Jan. 20 inaugurations. “We are going to be moving along in a consistent manner, putting together our administration, White House,” he said. “Nothing is going to stop us.”

Biden agreed that it would be helpful to have access to classified information like the presidential daily briefing, something an outgoing administration usually provides an incoming president. But he added, “The fact that they are not willing to acknowledge that we won at this point is not of much consequence to our planning.”

In a testy exchange with journalists at the State Department, Pompeo insisted that American efforts to prevent voter intimidation and ensure free and fair elections around the world were not diminished by Trump’s refusal to concede.

“We must count every legal vote,” Pompeo said, adopting the president’s language. “We must make sure that any vote that wasn’t lawful ought not to be counted. That dilutes your vote if it’s done improperly.”

He snapped when asked if Trump’s delaying tactics undermined the State Department’s efforts to pressure political leaders abroad to accept losing results. “That’s ridiculous and you know it’s ridiculous, and you asked it because it’s ridiculous,” he said.

Pompeo can often be sarcastic, particularly when speaking to reporters, but the State Department made no effort to clarify if he was joking. Asked later on Fox News if he was serious, he did not say. “We will have a smooth transition,” he said. “And we will see what the people ultimately decided when all the votes have been cast.”

His comments provoked a backlash from career diplomats, including criticism of his glib tone and outright concerns that the Trump administration would try to steal the election. But Trump congratulated him later on Twitter: “That’s why Mike was number one in his class at West Point!”

The delay in acknowledging the results has left American embassies in limbo. At least some embassy officials have been told to steer clear of any efforts to help Biden with foreign leaders who want to congratulate him, as they normally would during a transition. Diplomats said they could not even begin enumerating the successes of the Trump administration for fear of describing it in the past tense.

Some ambassadors sought to straddle the line of neutrality even as they pointedly did not recognize Biden as the victor. “It’s been a hard-fought race that has shown us the American spirit of both grit and resilience,” Robert “Woody” Johnson, the ambassador to Britain, said on Twitter. “Nothing in the history of America worth achieving has ever come easy.”

Other envoys echoed the president’s allegations of voter fraud. “Please don’t disenfranchise me and my fellow voters in order to win at all costs,” Carla Sands, the ambassador to Denmark, said on her personal Twitter page. By way of evidence, she posted a screenshot of a State Department website that could not track her absentee ballot.

In extending his purge of the Pentagon on Tuesday, Trump replaced three more policy officials with loyalists. Some Defense Department officials worried that the replacements could be more amenable to striking American adversaries than their predecessors were.

Tata, a retired Army one-star general who has called Islam “the most oppressive violent religion” and referred to former President Barack Obama as a “terrorist leader,” withdrew from consideration for the top Pentagon policy job in August amid opposition from both Republican and Democratic senators. The president also installed Kashyap Patel, a former aide to Rep. Devin Nunes, R-Calif., who played a key role in helping Republicans try to undermine the Russia investigation, as chief of staff to the new acting defence secretary, Christopher Miller, adding alarm at the Pentagon over moves to stock the department leadership with loyalists.

Trump’s allies said the president was justified in fighting the election results even if he was not successful, citing what they deem illegitimate court decisions expanding mail-in voting.

“In light of Pennsylvania’s Supreme Court’s unconstitutional de facto legislation enacted through its rulings, along with the coming 2022 U.S. Senate and governor races, the Trump campaign’s litigation is essential for Republicans to have a fair playing field in the long term no matter the short term result,” Sam Nunberg, an adviser to Trump’s 2016 campaign, said by email.

Only nine sitting presidents before Trump lost bids for another term in a general election (a few others were not renominated by their party), and some like John Adams and John Quincy Adams were sour enough to skip their successors’ inaugurations. But none resisted leaving the office or made claims of widespread conspiracy to reverse the outcome.

“We have not seen any president in history lose reelection, refuse to concede defeat and take actions that threaten the abuse of presidential power to keep himself in office,” said Michael Beschloss, a prominent presidential historian. “Here, Donald Trump is yet again in a historical category of his own — and this time, it is ominous for democracy.”

Richard Norton Smith, who wrote a biography of Herbert Hoover and is writing one on Gerald Ford, two of the nine, recalled Hoover’s anger at the man who beat him, Franklin Roosevelt, and their frosty car ride to the inauguration in March 1933.

“But the point is Hoover, however embittered he was over F.D.R.’s unwillingness to cooperate, as he defined the term, shared the same car, just as he had welcomed the Roosevelts for the ritualistic pre-inaugural tea the night before,” Smith said. “They might despise one another, but their personal animosity was outweighed by their commitment to the democratic process.”

The parallel often cited is when Vice President Al Gore pushed for recounts in Florida in 2000 to overcome a slim lead by his Republican opponent, Gov. George W. Bush of Texas. But Gore was not the incumbent, and President Bill Clinton did not direct the administration to intervene, although it did withhold transition resources from Bush until the fight was resolved.

“We were so darn careful not to use any government resources, funds, staff or even a paper clip,” said Donna Brazile, who was Gore’s campaign manager.

In Florida, Gore had a plausible chance to change the outcome of the election, given that he was down by only 327 votes in a single state after the automatic machine recount. Trump, by contrast, is behind by tens of thousands of votes in multiple states that would have to switch, which has never happened on that scale.

“The big difference,” Brazile said, “is this feels like a major PR campaign being waged in the courts to sully the voters where Trump lost or underperformed versus shaping a much larger narrative that this election was so-called rigged.”