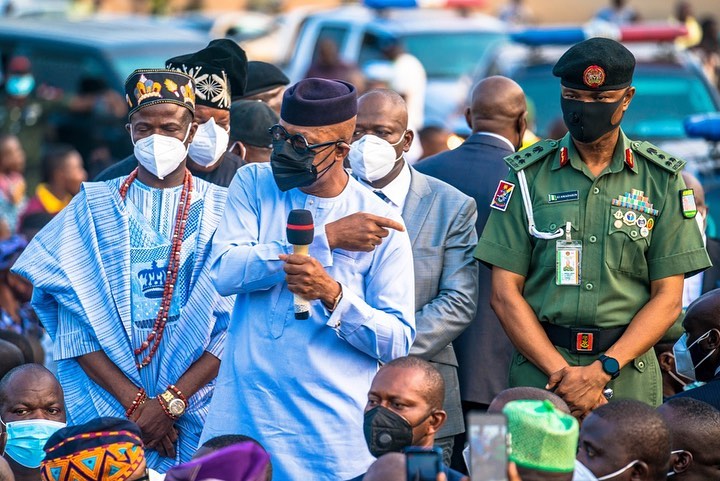 BY DAYO ADESULU
Governor of Ogun State, Dr Dapo Abiodun will today Tuesday, kick-off a meeting with some northern governors to bring lasting solutions to the herders’ killings in the State.
Abiodun had on Monday via his Facebook page said: ”Following my assessment today of some areas in Yewaland affected by the recent herdsmen unrest there, we have set up a joint security task force for the axis, with an assurance of compensation for victims.
”Towards further ensuring peace, we will hold a stakeholders meeting, which would have a number of Northern Governors in attendance, tomorrow (Tuesday).
”We are providing all needed support to agencies, so rest assured, this growing menace will stop as the State Government caters for the affected.
However, in one of the reactions to Abiodun’s publication on his Facebook page, Mr Taiwo Ayo Sikemi said: ”Sir this is not the issue of setting up a joint committee.
.
”It’s about tightening the securities forces around border towns, call for indigenous officers who are Yoruba’s to be at the base of the securities monitoring the inwards of aliens coming into the state.
”Those Governors who pay bandit and negotiate with them will be called for renegotiation, you believe to have a faithful response from them.
My opinion:
”Let all the Obas in various communities call to use the ancestral Powers they are known with … What’s the purpose they called them seconds to the gods.”
READ ALSO: UPU to FG: Ban Movement of Cattles, Herdsmen to End Clashes
Another respondent on Facebook, Prince Sola Sodeke said: ”I’m disappointed when your colleague the Bauchi state governor is advocating for herdsmen to carry Ak47.
”You are not talking about how to protect us, what is compensation instead of forestalling further invasion and plundering of our state by criminal elements who are mostly foreigners.
”What happened to your pussy footy on Amotẹ́kuǹ? Its better you wake up sir.”
For Christian Olumide Stephen, he said: ”Why do we usually have a Governor that cannot be relied on.  Abiodun is the most biased Governor I have ever seen in Ogun State.”
Reacting further, Tunde Agboola Pappyshoes, said: ”Many of you elected politicians are afraid of what Abuja will say when you call a spade a spade.

”Only Akeredolu stood up and reject herdsmen point blank, we aren’t fools.
Until the South-West governors come together and promulgate anti-grazing law, farmers’ lives will continuously be mortgaged on the platform of politics.”
In his reaction, Mr Olamilekan Abdughafar Ogundele said: ”Dear Mr Governor, why would you have a stakeholder meeting with Northern governor?
”The governor that said the herdsmen have the right to use AK47? Don’t you have the areas affected by representatives like baalẹs and ọbas? That means you don’t respect them and not capable to rule Ogun state.”
READ ALSO: Senate States What Buhari Must Do To End Herdsmen’s Brutality

Meanwhile, the Grand Council of Yoruba Youths has advised President Muhammadu Buhari to convene a peace meeting between host communities, herdsmen, and critical stakeholders as a way out of the herders’ crisis in the Southwest.

It urged the government to immediately implement the outcome of such meeting across the region to avoid further loss of life and property.

The group observed that the government’s failure to meet people’s expectations with regard to the problem is one of the factors fuelling people’s interest in succession.

The Council, in a statement, noted that the herders/farmers crisis, which hitherto was a northern problem had spread to other parts of the country.

It said: “This development is not limited to the Southwest alone but it is now in vogue in other regions where the residents have been pushed to the wall by the unfriendly attitudes of the criminals among the herdsmen.

“Just like Lagos/Abuja Express, Abuja/Kaduna Express, Kaduna/Kano, the Benin/Ore Express has also become a death trap since for the innocent travellers, courtesy, these notorious criminals among the herdsmen…

“In Kwara, Ekiti, Ogun States and several other states, there is a similar outcry, and the episode appears as if we don’t have the competent law enforcement agents in place or there is no matching order from above for them to act on.

“We have been witnessing attacks and counter-attacks here and there and this portends a great danger to the peaceful co-existence of various ethnic groups in Nigeria.”

Buhari Should Speak Up As Ondo Herdsmen Speak Fulfude – Akeredolu

NYSC-DG Set For Inauguration of Projects In Jigawa

Akpabio Out, As Senate Swears-in Ekpenyong