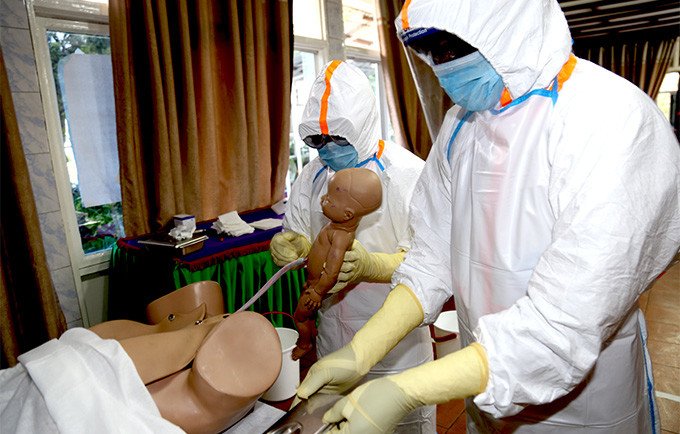 Red Cross teams in Guinea and across West Africa are ramping up response efforts to contain a deadly Ebola outbreak.

“Ebola does not care about borders. Close social, cultural and economic ties between communities in Guinea and neighbouring countries create a very serious risk of the virus spreading to Liberia, Côte d’Ivoire and Sierra Leone, and potentially even further.

“That’s why we are launching an integrated cross-border operation aimed at rapidly confining the outbreak to its current location—and swiftly containing any eventual outbreak beyond Guinea.”

In Guinea, Red Cross teams in N’zérékoré were mobilized to conduct safe and dignified burials for two people who were killed by Ebola. They also disinfected a local hospital and started efforts to create broad community awareness about the return of the disease in the urban areas of N’Zérékoré and in Gouécké.

There are an estimated 1.3 million people living in the health zone affected by the outbreak. The Guinea Red Cross and IFRC plan aim to support about 420,000 of them with a range of services, including community sensitization, community-based surveillance, water, sanitation and hygiene, safe and dignified burials, infection prevention and control, as well as psychosocial support.

In surrounding countries, Red Cross actions will target an additional 6 million people. In Sierra Leone, a network of 200 Red Cross volunteers in Kambia and Kailahun are now on high alert and are conducting surveillance activities. In addition, an alert was sent to the four other districts (Kono, Koinadugu, Western Area and Pujehun) bordering Guinea and Liberia, where an additional 100 volunteers are preparing social community awareness activities.

In Liberia, in areas along the borders with Guinea, Red Cross volunteers are on high alert and are currently conducting awareness in communities. The most at-risk areas include Bong, Lofa, Nimba, Cape Mount, and Gbarpolu counties. Liberia Red Cross will be sending Personal Protective Equipment to the region.

In Mali, Red Cross teams will provide services such as surveillance and community sensitization. The Senegalese Red Cross is beefing up surveillance efforts at border points while ramping up community awareness activities.

In addition to enacting community response, surveillance and sensitization activities, Red Cross teams are also concerned about the needs being created by localized efforts to limit movements in a bid to contain the outbreak. As a result of these public health measures, people near the epicentre are already in need of water, sanitation and hygiene services as well as food assistance.

IFRC’s Mukhier said: “This outbreak is likely to complicate an already challenging situation. COVID-related containment measures currently being implemented have exacerbated food insecurity in the region and this may lead to the reluctance of communities to respect new preventive measures that are being put in place to contain Ebola.”