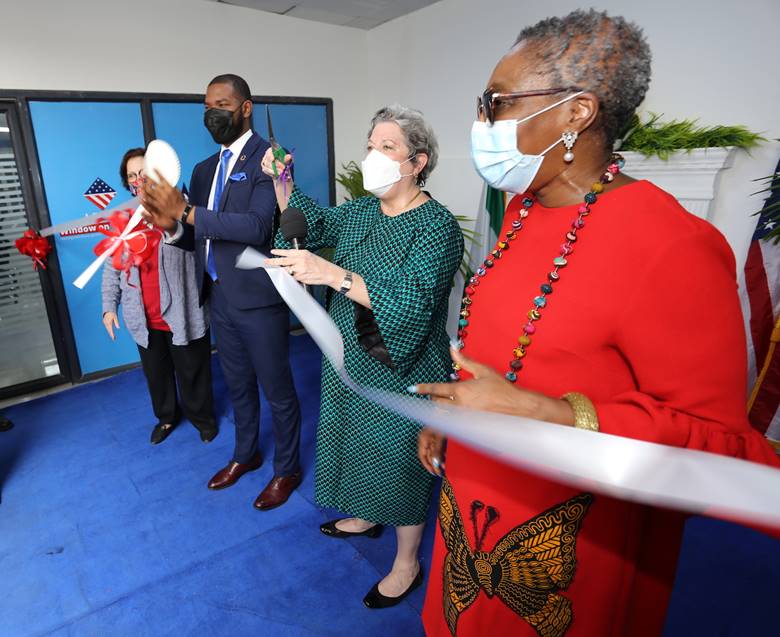 The United States Ambassador to Nigeria, Ambassador Mary Beth Leonard, on Monday, opened the first-of-its-kind Window on America in Nigeria.

Hosted at the Lekki Slum2School Innovation Hub in Lagos, the Window on America will serve as a community centre where young people develop their ideas, as well as their leadership and entrepreneurship skills through programs and workshops designed especially for them.

Ambassador Leonard explained that the Lekki Window on America is a result of a partnership between the U.S. Consulate General in Lagos and Slum2School Africa, founded by Otto Orondaam, a 2016 alumnus of the prestigious U.S. government’s Mandela Washington Fellowship.

The Ambassador noted that the new Window on America is open to everyone in the community offering its services, programs and resources to the public at no cost.

“We are happy to open the very first Window on America space in Nigeria here in Lekki,” Ambassador Leonard said at the opening ceremony attended by alumni of U.S. government exchange programs, educational administrators, Slum2School volunteers and community representatives.

“In the next few months, we will follow with six additional new Windows on America in the south and 12 across the country. We want our Windows on America to promote mutual understanding between the United States and the people of Nigeria.”

Visitors to the window will typically include students, teachers, entrepreneurs, academics, journalists, civic organizations, government officials, and community leaders in addition to many others.

Windows on America are American Spaces that provide welcoming environments where visitors can learn about the United States, including its government, history, culture, and educational system through programs, lectures, books and electronic resources provided by the U.S. Government.

In addition to the Lekki Window on America, 12 more will be opened in major cities across the country, including Abeokuta, Awka, Benin City, Enugu, Osogbo, Uyo, Zaria, Minna, Dutse, Makurdi, Gombe and Lafia, in order to engage more Nigerian audiences in their local communities.

YWC Slates Support Rally For Amotekun On Tuesday In 6 States