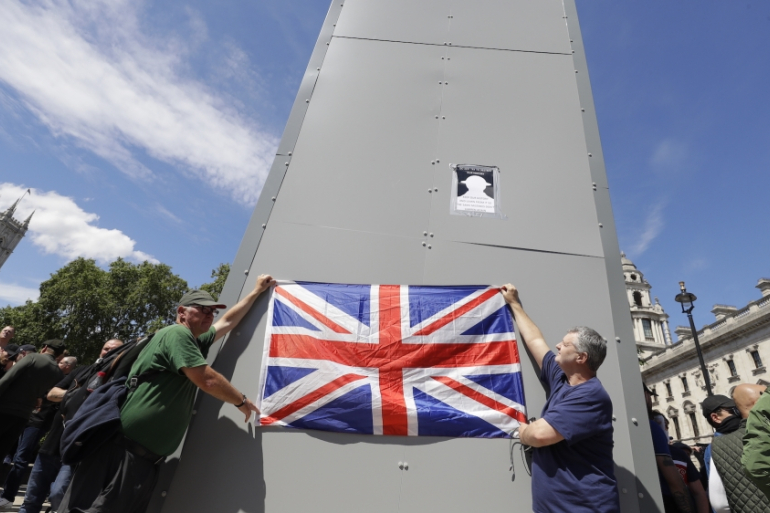 This week’s British Defence Review is the inevitable consequence of Brexit, the cost of the pandemic, the end of the Cold War, British economic decline and technology changes.

But oddly enough it also marks a return to strategic thinking more closely aligned to the days of Empire than the 21st century.

Island Britain has traditionally—and with good reason—focused on sea power. It is a trading nation. It needs the sea to trade and it needs a navy to protect its sea-based trade routes. Furthermore, Britain’s departure from the EU has exponentially increased the need for the blue water navy of imperial days.

The European-based land army of the Cold War was a historical anomaly created by the post-war need to occupy Germany and prevent an invasion of Western Europe by the Soviet Union. The British Army of the Rhine at one point numbered 83,000 troops. It no longer exists. There is now a mere 198 British liaison personnel on German soil. The bulk of the British Army’s commitment to the defence of continental NATO is 900 troops rotated into the Baltic States from British bases.

Does that mean the Russian threat has gone away? Absolutely not. It just means that Britain can’t afford a large army. Russia, as Boris Johnson, told Parliament remains the most “acute military threat” to the UK. But the kitty is empty. The country had not recovered from the 2008-2009 banking crisis when it was hit first by the financial consequences of Brexit and then the health and economic disaster of the coronavirus pandemic.

Britain needed to increase its bang for the buck. So the government decided to boost the submarine-based nuclear missile deterrent by 40 per cent. Unfortunately, this move also appears to breach international law as Article 6 of the Nuclear Non-Proliferation Treaty commits the signatories “to pursue negotiations in good faith on effective measures relating to the cessation of the nuclear arms race at an early date and to disarmament.”

Even if Britain is not deemed a treaty breaker (again), its nuclear rearmament will make it more difficult for the US to negotiate a new Intermediate Nuclear Forces Treaty (INF) with Russia and will encourage Iran, North Korea and other countries to pursue their nuclear ambitions.

It is not only in the nuclear field that Britain is replacing human troops with technology. The Johnson government aims to become a “science and technology superpower” and military usage will be a key factor driving the country to this goal. Research and development investment in technology will rise from 1.7 per cent of GDP to 2.4 per cent by 2027. £6.6 billion of that money is set aside for military purposes and £700 million for intelligence and substantial expenditure on a space command.

It sort of makes sense as the two greatest threats from Russia are nuclear and electronic in the form of cyber-attacks. Its conventional forces are significantly smaller, and it no longer presents the challenge to democratic values that were posed during the Cold War, and, finally, it is an economic sprat.

China, on the other hand, will soon be the world’s largest economic power, is investing heavily in the military and is challenging Western values at every turn. It is, according to the Defence Review, “the biggest state-based threat to the UK’s political and economic security.” This is why the British Navy is returning to East of Suez with regular and growing patrols of the Indo-Pacific region, and a string of bases stretching from Gibraltar to Bahrain to Oman, to Kenya to Singapore.

But the British attitude towards China is schizophrenic. It is a threat and—because of its economic power—an opportunity. This means that the situation requires delicate handling and close coordination between British diplomacy and the military.

Unfortunately, that does not appear to be happening. The Defence Review was supposed to be launched in conjunction with a review of the newly merged Foreign Commonwealth and Development Office (FCOD) to present parliament with at least the impression of joined-up thinking. It now looks as if the second half of the equation won’t be dealt with until much later in the year.

The signs are that the diplomatic service will be beefed up to work alongside the projected naval power is unlikely. A key element of British “soft power”—the aid budget is being slashed from 0.7 per cent of GDP to 0.5 per cent. The Foreign Office budget has been whittled away over the past two decades and out of it has to come money for the BBC World Service and British Council. It is estimated that the amount spent on maintaining Britain’s network of worldwide missions is roughly equivalent to the annual expenditure of the City of Birmingham.

If Britain wants a balanced relationship with China it needs diplomats on the ground as well as ships in the water.

The primary responsibility of every government is the protection of its citizens.

The wannabe federalists of Europe have dismally failed at fulfilling this obligation with their handling of the coronavirus vaccine programme. And to compound their errors they have tried to cast Brexit Britain in the role of a scapegoat at a time when they should be trying to develop a positive relationship with the UK. Instead, Brussels has unfairly claimed that the Johnson government is behind Astra Zeneca’s failure to manufacture and deliver sufficient vaccine doses in a timely fashion. To compound the mistake they attempted to tarnish the vaccine with attacks on its safety. This, of course, is backfiring because it provides grist to the growing anti-vax brigade–costing tens of thousands of more lives. On top of that, the commission is talking about blocking exports of the PfizerBnTech vaccine (largely produced in Belgium) to third countries, which is Brussels shorthand for Britain. In the meantime both the World Health Organisation and the European Medicines Agency have declared Astra Zeneca safe; forcing European countries to put the vaccine back on the metaphorical shelf. But the poorly-managed vaccine programme has meant that Europe is enduring a third and deadly coronavirus wave. A year ago, Eastern Europe was patting itself on the back for avoiding the worst effects of the first wave. Now their health services are on their knees. According to the WHO the Czech Republic leads the world in new Covid 19 cases per 100,000—over 1,600 a day this past week. Poland has plunged into a national lockdown this week as has Italy, Paris and the French Riviera. German Chancellor Angela Merkel is considering a month-long extension to the German lockdown. But the hotspot tourist countries of Spain, Greece, Italy, and Malta are still planning to open their borders to tourists in May.

Biden is in a serious muddle with his immigration policy.

Donald Trump was rightly attacked for his inhumanity. But that does not mean that the vast majority of Americans want to open the immigration floodgates. Biden’s actions are still a long way from a social tsunami, but they are close enough for Republicans to be calling it that and finding listeners. Between the end of October and the beginning of March 400,000, illegal immigrants attempted to cross the US-Mexican border—a 15-year high. This is partly the result of a pent-up demand created by the Trump Era and partly by the Biden Administration’s decision to end the “Remain in Mexico” for processing policy. Biden now allows migrants across the border to be processed in US-based centres. The other major issue is unaccompanied children. Under the provision of Trump’s Title 42, hundreds of children were forcibly separated from their parents. Many families are still to be reunited. Biden is now allowing unaccompanied minors across the border. Parents are sending their children northwards because they believe that by pleading the politically significant issue of reunification their chances of joining the young ones will be significantly improved. An estimated 30,000 unaccompanied minors have entered the US from Mexico so far this year. They are, however, being kept in the same detention centres used by the Trump Administration. No one knows the exact conditions in these centres because journalists have so far been banned from entry. This has led to attacks on Biden’s immigration policy from the left-wing of the Democratic Party. What a muddle.

Relations between China and the Biden Administration are off to a bad start.

Perhaps the good news is that they can only get better. The two sides could not even agree on the purpose of this week’s meeting in Anchorage Alaska between Secretary of State Anthony Blinken and Yang Jiechi, former foreign minister and the foreign policy man in the Chinese Communist Party Party’s Politburo. The Chinese said the meeting was a “strategic summit” aimed at “resetting” Sino-American relations in the wake of the Sino phobic Trump years.  Wrong, said Blinken. The purpose of the meeting was to allow the US to vent its anger about Chinese human rights violations, and the challenges Beijing’s actions present to the “security, prosperity and values of the United States and its partners and allies.” But once the Anchorage dust has settled Washington will face some unpalatable facts. It cannot isolate China in the same way that it contained the Soviet Union during the Cold War. At the very height of its economic power, the Soviet Union’s share of the world GDP was less than a third of China’s today. In not too many years China will surpass the US as the world’s largest economy. For America and its allies to respond to the threat of Chinese totalitarianism with sanctions would be the same as shooting itself in the economic foot. At the moment the American diplomatic tactic appears to be to look for areas of collaboration. The top cooperative targets are climate change, the pandemic and North Korea. This is a traditional Western diplomatic approach: When faced with an apparently intractable negotiation, establish non-contentious areas of agreement which can then be built upon to reach compromise solutions in more disputatious sectors. The problem is that China is not a Western country.

The European political pendulum appears to be following the American example and swinging to the centre-left.

That is if elections this week in the Netherlands and Germany are an indicator. In Germany, the conservative Christian Democratic Union party of Angela Merkel suffered a major defeat in regional elections of CDU heartland Landers of Baden Wurttemberg and Rhineland-Palatinate. The poll was seen as a prime indicator for federal elections in September and the first big test for the CDU’s new leader Armin Laschet. Both the CDU’s long stranglehold on federal power and Laschet’s grip on the party leadership are now jeopardised. The CDU has lost power in both Lander and is expected to be replaced by a three-party coalition of the Social Democrats (SPD), Greens and Liberals (FDP). In the Netherlands, Long-serving centrist Prime Minister Mark Rutte has increased his parliamentary majority which means he can ditch the right-wing Christian Democrats.  The extreme right-wing Party for Freedom of Geert Wilders is still the second largest but has dropped its opposition to the EU to focus on an anti-Islamic platform. In Germany, the Xenophobic and anti-EU Alternative fur Deutschland (AfD) continues to drop in the polls following the government decision to label it as a semi-terrorist organisation. And in France, Marine Le Pen’s far-right National Rally has shifted from an anti-EU stance to a Eurosceptic position. It now wants to remain in Europe, stay in the Schengen Area and retain the Euro as the French national currency. The party’s slight tilt to the left appears to be paying dividends. Opinion polls show Marine Le Pen presenting a serious challenge to Emmanuel Macron’s hopes of retaining the French presidency in April 2022.

Observations of an Expat: Shifting Goalposts