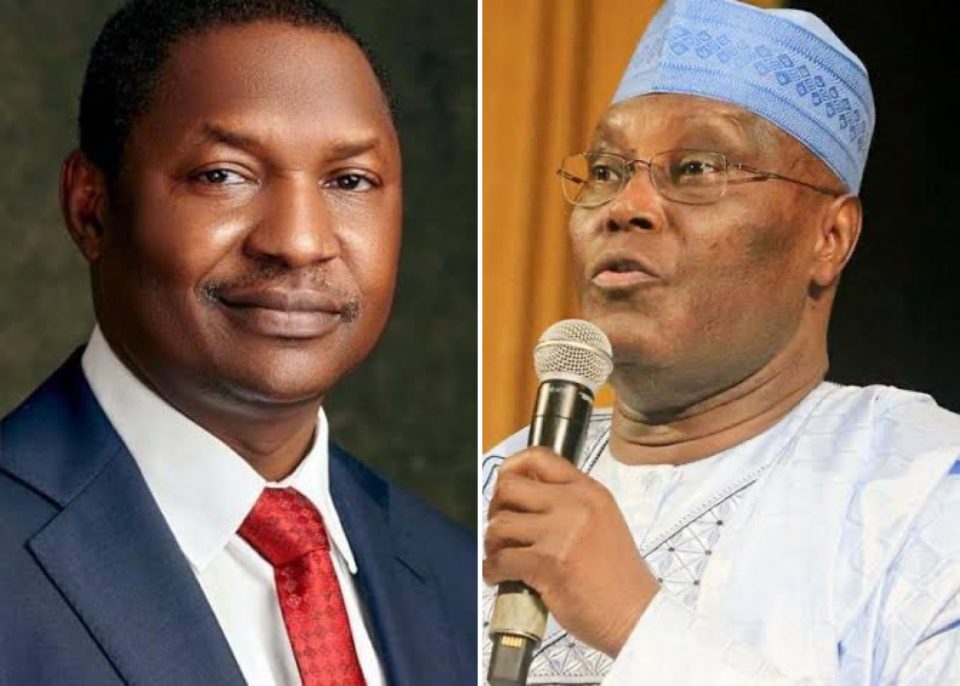 If the court would grant the prayers of Nigeria Attorney-General of the Federation (AGF) and Minister of Justice Abubakar Malami (SAN), ex-Vice President Atiku Abubakar will never be able to contest anymore as president of Nigeria.

Malami pointed out that former Vice President Atiku Abubakar is not eligible under the constitution to contest for President.

He argued that Atiku was not born a Nigerian or by Nigerian parents, and therefore does not met the provisions of Sections 25(1) &(2) and 131(a) of the constitution.

According to him, if Atiku contest as president, he would be violating Section 118(1)(k) of the Electoral Act should he put himself forward as a candidate.

The Nation reports that the aforementioned formed part of the AGF’s arguments in support of the suit filed before the Federal High Court, Abuja by the Incorporated Trustees of Egalitarian Mission for Africa (EMA).

The EMA is challenging Atiku’s eligibility to contest for President and praying the court to hold among others, that considering the provisions of sections 25(1) &(2) and 131(a) of the constitution and the circumstances surrounding his birth, the former vice president cannot contest for the top office.

In documents filed for the AGF by a team of lawyers, led by Oladipo Okpeseyi (SAN), it was agreed that, as argued by the plaintiff, Atiku is not a Nigerian citizen by birth.

Although the suit marked: FHC/ABJ/CS/177/2019 was filed before the 2019 presidential election, it is yet to be heard and determined.

However, it was mentioned on March 15,  during which Justice Inyang Ekwo noted that the suit was ripe for hearing and fixed May 4, for that purpose.

“The first defendant was born on the 25th of November, 1946 at Jada, at the time in Northern Cameroon. By the plebiscite of 1961, the town of Jada was incorporated into Nigeria.

In his written address, the AGF argued that the effect of the June 1, 1961 plebiscite was to have the people of. Northern Cameroon integrated into Nigeria as new citizens of the country, even after Nigeria’s independence.

He cited provisions of 1960, 1963, 1979 and 1999 constitutions and noted that the “reasoning of the lawmakers in ensuring that the persons to be the President of Nigeria is a citizen of Nigeria by birth is because such a person is the number one citizen and the image of the Nigerian state.”

The AGF argued that, where it is revealed that a person was born outside Nigeria before Nigeria’s independence in 1960, in a location which was never part of Nigeria until June 1, 1961, as it is in this case, such a person cannot claim citizenship of Nigeria by birth.

“This is even more so where his parents do not belong to any tribe indigenous to Nigeria until their death. The facts of his (Atiku’s) birth on the Cameroonian territory to Cameroonian parents remain unchallenged.

“This would include the legal preclusion of the first defendant from contesting for the office of the President of Nigeria.

The AGF noted that the only situation where Atiku could have acquired Nigerian citizenship by birth under the 1999 Constitution was if both or either of his parents and grandparents were Nigerian citizens by birth.

He added that another way would have been “if either his parents had become Nigerian citizen by virtue of Section 25(1) of the 1999 Constitution, which must be in compliance with Sections 26 and 27of the same constitution.

“With no concrete proof of compliance, we submit that the first defendant cannot contest election to the office of the Nigerian President.”

The AGF argued that Atiku, having contested election to the office of the Vice President before now, knowing that he is not a Nigerian citizen by birth, committed an offence under Section 118(1)(k) of the Electoral Act.

Atiku and the Peoples Democratic Party (PDP) on whose platform he contested the last election, has denied the plaintiff’s claims and prayed the court to dismiss the suit for lacking in merit.

They also filed a joint notice of objection, in which they insisted that Atiku is “a bonafide citizen of the Federal Republic of Nigeria.”

Atiku stated that aside from serving as Nigeria’s Vice President from 1999 to 2007, he held many public/private offices, including serving as Governor of Adamawa State and as a Commissioned Officer of the Nigeria Customs Service.

Atiku argued that he is qualified and eligible to be elected into the office of the President of Nigeria, adding that the plaintiff filed the suit in bad faith and in an attempt to malign his person and integrity.

He queried the plaintiff’s right to challenge his nationality, arguing that it failed to show the interest it has above other citizens of Nigeria to be entitled to approach the court on the issue.