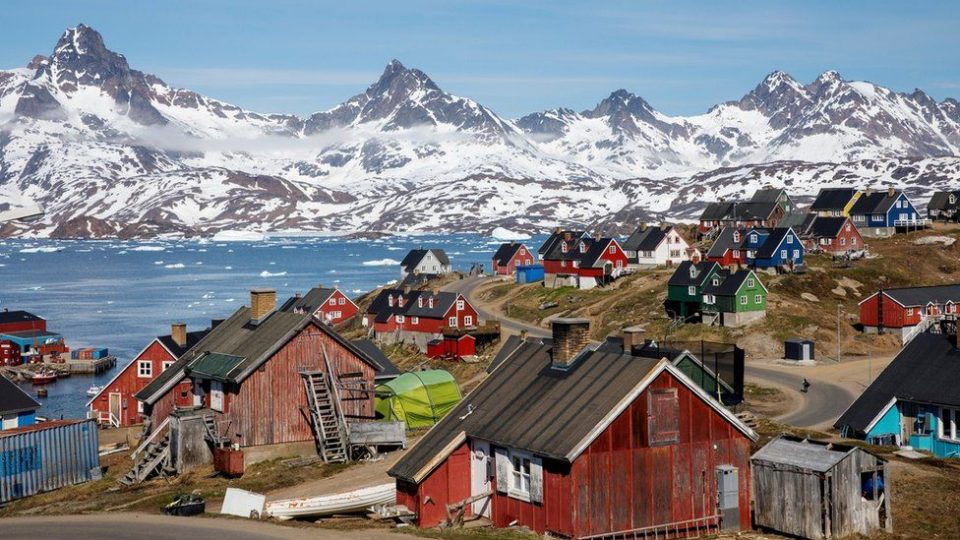 Greenland is not usually a world election hotspot. This is because most of the time the biggest issue for the 57,000 inhabitants is filling the pothole on Nuuk’s high street or the siting of a new streetlight to illuminate the long cold winter nights.

Not this time. The issue at stake—mining—will have consequences well beyond the shores of the misnamed Danish possession involving the environment, world shipping, defence, economic development and tectonic shifts in global power.

The election was won by the Inuit Ataqatigiit or Community of the People Party on the platform of stopping the development of the uranium and rare earth mine at Kvanefjeld. The increasingly sought after rare earth minerals are essential for the running of computers and various medical treatments. Eighty per cent of the world’s rare earth are found in China who are keen to keep their virtual monopoly. Greenland has the world’s second-largest deposit, which is why a Chinese company is behind the Kvanefjeld mine.

Greenland actually has more than a few rare piles of earth. It is in fact one of the richest untapped sources of minerals, oil, natural gas, precious and industrial metals anywhere on Earth. Fortunately for environmentalists, the Greenland ice cap has kept out development. But that ice cap is melting faster than in any other part of the Arctic and Antarctic regions. In fact, Greenland is expected to be ice-free (and properly named) sometime between 2037 and 2067.

The Danish government had been preparing for Greenland mining operations which would completely transform their Arctic possession. They had not counted on the country’s strong environmental lobby. Eighty-eight per cent of Greenland’s population are indigenous Inuits who are quite happy with their lives of hunting and fishing and keeping the modern world at bay.

But it is doubtful that Greenlanders will be able to enjoy their splendid isolation for much longer. The country is strategically located on transit routes through the Arctic Ocean and straddles Canada’s fabled Northwest Passage and Russia’s Arctic Sea. These are the shortest and thus most cost-effective links between Europe and Asia. They can also take large deep ships which are unable to squeeze through the Suez and Panama Canals (or become stuck).

Until recently the Arctic ice cap kept out all but the most intrepid heavy-duty ice breakers. Now the Arctic is open between July and September and climatologists reckon that it will be available to year-round shipping in the not too distant future.

The warming of the Arctic will also have economic benefits (if that is the correct word) for land-based operations. Permafrost has prevented the development of oil exploration and mining in the environmentally fragile environments of Russia, Canada, Norway and Alaska as well Greenland. Russia is expected to be the biggest beneficiary as it controls 53% of the Arctic coastline. It is estimated that the region contains 412 billion barrels of extractable oil and natural gas. Gazprom has already started operations.

READ ALSO: Observations of an Expat: The Trial

Perhaps more important will be the impact of climate change on Russia’s access to the sea. Throughout history, its economic and political development has been hamstrung by lack of access to warm water ports. Well, now it has nearly 6,000 miles of soon-to-be ice-free territory on which to build as many ports as it wants and has allocated $2.8 billion between now and 2025 for infrastructure development.

Moscow is also beefing up its military presence to protect and expand its newfound opportunity. It now has four new Arctic brigades, four airfields, six deepwater ports, 40 icebreakers and regularly stages Arctic war games. The Russians claim that the build-up is purely defensive. But Western governments are dubious, especially after the deployment of 30 nuclear-tipped Poseidon missiles capable of avoiding detection by crawling along the seabed to targets 6,200 miles away.

Greenland also has a military base, the American owned and operated Thule Air Base only 974 miles from the North Pole. It provides warning of missiles coming over the Arctic and key operations for the new and expanding Space Force. This, plus Greenland’s economic potential, explains Donald Trump’s cack-handed attempt to buy Greenland from the Danes. He was, by the way, quickly followed by bids from China and Australia.

An ice-free maritime Arctic also raises interesting legal questions. Under the 1982 International Law of the Sea, states bordering a sea coastline can claim an exclusive economic zone overall water 200 miles from an owned landmass. Not from the mainland but from the tiniest island to which it can claim ownership. As the ice retreats, new islands will appear and so expect a flurry of flag plantings.

The Law of the Sea also allows for international transit within the 200-mile zones. But political reality means that ownership of contingent land provides de facto control of vital shipping lanes. Canada, for instance, is currently arguing with allies in the US and Europe over the nature of international transit rights through the Northwest Passage.

The ships, the miners, the soldiers, the oil wells… they are all coming to the Arctic. It is unlikely that the plucky Greenlanders can stop them. But good luck.

Northern Ireland was a key part of Britain’s Brexit referendum.

Remainers claimed that withdrawal from the EU risked undermining the 1998 Good Friday Agreement and a return to The Troubles which raged through the province for 30 years. “Fear Factor” retorted the Brexiteers. “It won’t happen.” But after a week of sectarian violence, it looks as if there was something to fear. The Troubles began in 1968 because the Protestant-controlled Stormont government insisted on anti-Catholic legislation. The Catholics saw their only hope in unification with the Republic of Ireland in the South. The Good Friday Agreement kept the dream alive for the Catholics and kicked it into the long grass for the Protestants. The north/south border was to stay open. Why not? Both countries were members of the EU. The aspiration of Irish unification was allowed to remain on the table, but no date or form was agreed upon. Perhaps the two EU members would gradually move towards some sort of federation under the auspices of an overarching European Union. After all, the EU was a guarantor of the peace along with the US, Britain and Ireland. Then came Boris Johnson’s easy-peasy-oven-ready-you-can-have-your-cake-and-eat-too deal. In a major concession to Brussels, Washington and Dublin, Johnson stabbed the Protestant Union Democratic Party in the back and agreed to keep open the north/south border and draw a new customs border down the Irish Sea, separating mainland Britain and Northern Ireland. This is the Northern Ireland Protocol. It immediately complicated trade between the Ulster provinces and Britain and it moved the aspiration of Irish unification from the long to the short grass. The result is that this time the Protestants are taking the lead in violence and they can be even more stubborn than and just as nasty as the IRA.

Ukraine again appears on the edge of the abyss and threatening to drag others in behind her.

Russian tanks and armoured vehicles have this week been rushed to the Russian/ Ukrainian border. 4,000 airborne assault troops have been rushed to annexed Crimea. Nato ministers have met in emergency session. Ukrainian President Vladimir Zelenskiy has visited the front line. Joe Biden has promised him “unwavering support” and Moscow has threatened to “protect” Russian speakers in Eastern Ukraine from “Nato aggression” (a nationalistic ploy used in 1938 and 1939 by Hitler to justify attacks on Czechoslovakia). We should not, however, be wholly surprised by events. Ukraine has been piggy in the middle between Russia and the West for centuries. In the 18th century, it was divided by the Austro-Hungarian and Russian empires. In the middle of the 19th century Britain, France, Sardinia and the Ottoman Empire fought a war to keep the Russian navy out of the Black Sea. In World War, I Western Ukraine sided with Austria-Hungary and Germany. Eastern Ukraine went with Tsarist Russia. During World War II the western half sided with Hitler and the East with Stalin. After World War II all of Ukraine was absorbed into the new Soviet empire. As a reward for its acquiescence, the state government was given Crimea, which explains why the strategic peninsula became part of an independent Ukraine when the Soviet Union collapsed in 1991. The longer history explains why a nationalistic Vladimir Putin annexed Crimea in 2014 and sent “volunteers” to regain the Eastern region. In the meantime, an independent Ukraine was has become a “Red Line” for Nato. Putin, in desperate need of foreign policy success, is betting on the line being more of a washed-out pink.

Good and possibly bad news on the Iranian front.

The good news is that Washington and Tehran are talking about the US re-joining the Iran Nuclear Accord.  Actually, they are not talking to each other. They are holding what are called “proximity talks” in Vienna which means the two delegations sit in separate rooms while diplomats from third party countries run back and forth. This rather clumsy procedure has not been helped by the news that China and Iran signed a 25-year Cooperation Agreement which will undermine US sanctions against Iran. The economic blacklisting of Tehran was a key part of the Trump Administration’s strategy to force Iran to abandon any nuclear ambitions. Biden has said he would lift his predecessor’s sanctions if Tehran makes moves to disengage from Syria, Lebanon, Iraq and Yemen; and pulls back on its nuclear plans and development of long-range missiles. The Iranians say: lift sanctions first. China’s priority is not undermining US negotiators. After all, they too are signatories of the Iran Nuclear Accord. Their main concern is strengthening their Belt/Road initiative and securing an energy source. But the deal, as Iran has made clear, gives Tehran some economic breathing space and strengthens their negotiating position in Vienna.

It is being called “sofagate”.

Turkey’s protocol blunder in failing to supply an armchair for the European Commission president at this week’s EU-Turkish summit.  In the rarefied upper reaches of European diplomacy image counts. And Commission President Ursula von der Leyen was clearly miffed that her position and image suffered over seating arrangements that left her first standing and then relegated to a distant sofa.  So what could be the impact? For a start, the diplomatic gaffe will be damage Turkish President Recep Tayyip Erdogan’s reputation with feminists, especially as it came only a few days after he pulled Turkey out of the International Convention on Violence Against Women. Neither does it help his half-hearted efforts to keep alive Turkish dreams of eventual membership of the EU.  From Brussels’ point of view, it makes it more difficult for the EU to renew the vital EU-Turkey deal whereby the EU paid billions to keep Syrian refugees in Turkey. Finally, it damages Ms van der Leyen already tarnished reputation. A number of EU figures feel that the former German defence minister was forced on them by Chancellor Angela Merkel and she is perceived as done a poor job rolling out the coronavirus vaccine and dealing with post-Brexit Britain.