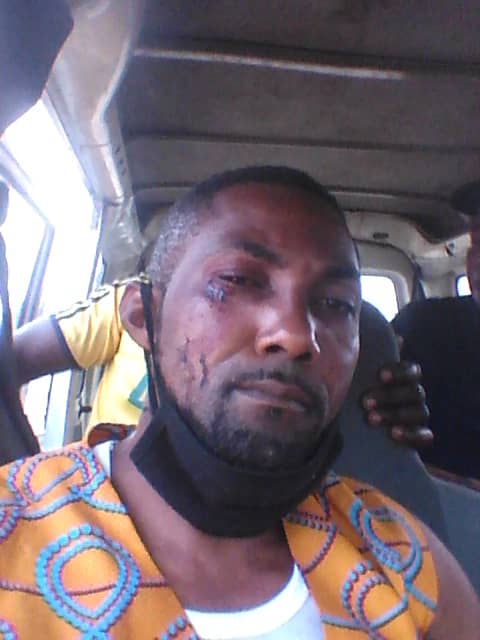 The Editor-in-Chief of 9jreporters, Bartholomew Madukwe has decried the brutality meted on him by Dr Adejoke, Ade and Ortega in connivance with IPO (ASP Chris).

According to the journalist, while the trio of  Dr Adejoke, Ade and Ortega were attacking him on Saturday,  IPO (ASP Chris) was at the scene watching.

Madukwe, is calling on the police authorities in Nigeria and the Lagos State Commissioner of Police, CP Hakeem Odumosu, to protect his life from being taken away by the trio.

Adejoke, whose hospital is at Agunmo, Oko-Afo area of Lagos State, who is contesting the position of Progressive International All-Stars (PIAS) Chairman with the journalist, organized one Ade and Ortega to attack him, at Extra-Time hotel.

It was gathered during the exit from an event where he was attacked, the Editor-in-Chief’s right eye was hit by Ade, using an elbow.

A police officer, ASP Chris (IPO) who was invited by the journalist to arrest Adejoke, Ade and Ortega watched and threw away his face, allowing Adejoke to assault the Editor-in-Chief heavily in his presence for 10mins.

According to the IPO, sometime in 2019, the journalist petitioned him at the Area K Command over unprofessional conduct.

He said in pidgin, ?you think say I don forget wetin you do for 2019? Shebi na you petition me to Hope, Area Commander then. See am, na my hand wey your case dey now. I no fit forget.”

In a letter to the Lagos CP and AIG Zone 2, via WhatsApp, Madukwe for the transfer of the case since the IPO allowed him to be grievously assaulted by Adejoke whom he came to arrest and has raised an issue of 2019.

The letter reads: “COMPLAINT ON BIASED HANDLING OF ASSAULT CASE BY ASP CHRIS (IPO WITH GSM 08033609886) OF AREA K COMMAND AND CALL FOR CASE TRANSFER

My name is Bartholomew Madukwe, a former reporter at Vanguard Media Limited and presently the Editor-in-Chief of 9jreporters (Online).

“On Saturday, April 3, 2021, at about 5 pm, I reported a case of assault against Adejoke, Ade and Ortega, at Area K Command, Morogbo, Lagos State and my complaint was received by ASP Chris, who is the IPO in the matter.

ASP Chris followed me to the scene of the incident after informing him of how one Ade elbowed me on the right eye, at Extra-Time Hotel, Oko-Afo area of the state, in the course of a reception arranged for Badagry All-Stars, after Saturday’s friendly match.

On getting to Extra-Time Hotel with the IPO (ASP Chris), right before his eyes and at close range, as I showed him Adejoke for arrest, Adejoke descended on me by giving me blow on the same right eye that Ade elbowed. As I fell down on the road- outside the gate of Extra-Time, thinking the IPO (ASP Chris) would handle the situation, Adejoke started kicking me with his foot on my head and other parts of my body, while the IPO (ASP Chris) stood aside and watched. I was on the floor for about 10mins. After some people had stopped Adejoke from further kicking me, I stood and entered the bus that brought me and the IPO to the hotel for arrest.

Adejoke, after saying he has all it takes to deal with me and nothing will happen, came to Area K with his friends, by himself. After the IPO and one Favour narrated to the Crime Officer what they witnessed, the Crime Officer that Adejoke is put in the cell.

QUESTION: Why did the IPO allow the suspect he was meant to arrest for assault to carry out a higher level of assault in his presence and he did nothing to stop it?

“COMPLEXITY- The IPO (ASP Chris) gave me a police medical document for Badagry General Hospital. On Sunday, April 4, 2021, (the next day) I was at the hospital as directed but the doctor on the ground checked my eye and said he is not an optician, that I should come on Tuesday to meet the eye specialists for better attention.

While returning from the hospital, without the IPO (ASP Chris) finding out from me the condition of my eye or feedback, he released Adejoke and said it was the Area Commander that released him. This he said in front of the bike man that carried me (08122403006) and one Francis (08025418989) who also witnessed all assaults because he was present at the event.

“IPO (ASP CHRIS) REVENGE- While I was writing my statement, the IPO (ASP Chris) started explaining that in 2019, I reported him to the Area Commander then, Hope, and now he is the IPO of my case today.

He explained further that I might have forgotten the 2019 matter but he can’t forget it because he knows what he faced then. Then I realized why he (IPO) allowed Adejoke to assault me in his presence and knew I cannot get justice from him- hence my request for the transfer of the case from him and Area K Command entirely to avoid further unprofessional handling of the case of assault on me.

Fortunately, the 2019 matter the IPO referred to was one concerning Francis who sat with me in the IPO’s office as he spoke. According to the IPO (ASP Chris), he is not interested in whatever transpired at the same Badagry General Hospital he sent me to. In fact, when I saw that things were not making sense in the way the assault case is being handled by the IPO (ASP Chris) and revelations he made, I now presented to him the printed picture of my right eye that I took. I asked him if the picture wouldn’t be needed and he reluctantly received it- despite he never requested for it.

QUESTION: Is it professional for an IPO to stand and watch his complainant being assaulted by same person he was meant to arrest?

“CONSEQUENCE OF IPO (ASP CHRIS)- Following shabby handling of assualt case, Adejoke and his friends on Sunday, April 4, 2021 made mockery of me on a group (PIAS) WhatsApp platform saying I ought be on an hospital bed. (See as attached A1). According to Adejoke, nothing has been done to me yet.

“EXTRA-TIME HOTEL-The owner of Extra-Time Hotel, in a chat on PIAS WhatsApp platform, rather than finding out if my eye is better, came up with threats ob me for bringing a policeman to his hotel. (See as attached A2). THREATS-

Now, I live in fear that my life is at great risk and I cannot get police protection from Adejoke and his cohorts. After all, the IPO (ASP Chris) failed to protect me on Saturday as Adejoke attacked me, blew me and kicked me- as he (IPO) folded his hand and looked away.

As a citizen of the Federal Republic of Nigeria and journalist, I seek for protection of my life by the Nigerian police, from Adejoke, Ade, Ortega and others.”