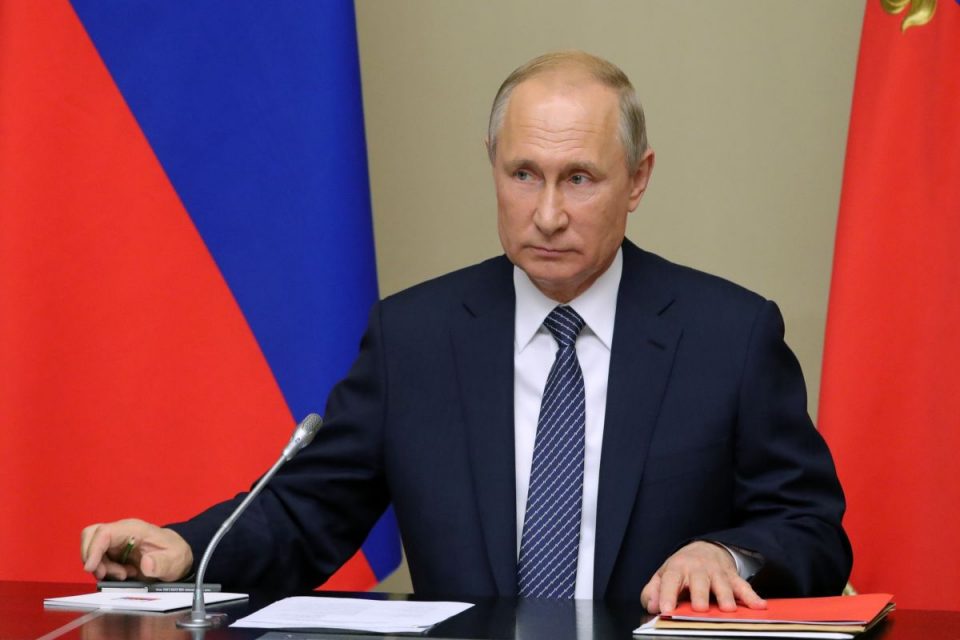 The conventional wisdom is that nuclear Armageddon was avoided in October 1962 by a plucky iron-willed young American President. Not quite. A new book by award-winning Russian author Serhii Plokhy reveals that the Cuban Missile Crisis was created by poor communication at every level in both countries and that it was more a matter of luck rather than pluck that saved the world.

Miscommunication and misunderstanding remains a Russian-American problem and is now coming to the fore again over Ukraine.

But back to October 27, 1962. The US naval blockade of Cuba had been in force for five days. To persuade the Soviet submarines to return home President Kennedy ordered US ships to launch a continuous barrage of depth charges on any members of the Soviet underwater fleet that they found. The purpose was to harass rather than destroy.

But Valentin Savitsky, captain of nuclear-armed B-59 was not privy to American thinking. By the 27th of October, his crew had endured two days of tension, diminishing air supplies and increasing heat. Savitsky gave the order to surface. He was immediately subjected to a barrage of tracer bullets fired by trigger happy US fighter pilots circling the area.

Convinced that war had started and he was under full-scale attack, the Soviet captain gave the order to dive and fire a nuclear torpedo.

Fortunately, lady luck intervened. The captain of the US destroyer Cony realised the danger and flashed an apology from his signal light. It was spotted by the sub’s signals officer just as the B-59 slipped beneath the waves, and was only seen because his searchlight became stuck. The apology was immediately relayed to Savitsky who, at the last minute, countermanded his attack order.

It is too easy to criticise the military for being trigger happy. The truth is that their actions were the product of an atmosphere created by their political leaders. And that misunderstanding bordering on criminal ignorance was a failure of the judgement of both Khruschev and Kennedy to comprehend the character and thought processes of the other and their countries’ respective priorities.

The same problems and issues appear to be rearing their head over Ukraine. There are lots of reasons for the Russian actions. And lots for the Western reaction. For a start, eastern and western Ukraine have historically been culturally and politically split with the eastern half facing towards Moscow and the western half looking towards Berlin and Vienna.

Next, from the Russian point of view, there are geostrategic considerations. Most of Ukraine lies in the Great European Plain, aka, the tank invasion route in and out of Russia. The Russians are seriously worried that Ukraine will join NATO which will place tanks and tactical nuclear weapons right on their western border. Shades of Cuba in reverse.

Then there is the cultural/political element. There is actually a section of the Russian constitution that requires the government to protect “ethnic Russians” anywhere in the world. Putin has decided to define the definition of “ethnic Russians” as anyone, anywhere, who speaks Russian as a first language. Moscow claims that 500,000 “ethnic Russians” have requested Russian passports.

Finally, there is the Kremlin’s belief that Russian national interests trump international law every time. In fact, international law doesn’t really apply in Moscow. It is on this last point that the West has its biggest problem with Putin. A rules-based international system is regarded as the essential prerequisite to the peaceful conduct of affairs between nations and the rock on which most of the post-war world has prospered.

Russia agreed to an independent Ukraine when the Soviet Union collapsed in 1991. It has already annexed Crimea and its “little green men” are fighting to permanently hive off the Donbas Region. That is contrary to international law.

Next is the Western belief that its interests are best served by the extension of liberal democratic values throughout the former Soviet empire in Eastern Europe. That is why most of Eastern Europe are now members of NATO and the European Union.

The exception is Ukraine. Not for wanting by many in the Ukrainian government who crave the protective and financial benefits of NATO and EU membership. The problem is that Ukraine has become a red line in Russian-American relations in much the same way as Finland was during the Cold War.  The West accepted Finnish membership of the Western Alliance would be interpreted by Moscow as an attack on its vital interests and the Russians in return allowed the Finns a democratic government.

READ ALSO: Observations of an Expat: Consequences of Greenland

President Joe Biden in a Tuesday phone call with Vladimir Putin proposed a summit to discuss deteriorating Russian-American relations. Ukraine will be high on the agenda, but also there will be lapsed nuclear disarmament discussions, human rights and Russian cyber-attacks. Putin has been coy in his response, saying that the prospect of a meeting was “dependent on future US actions”, a thin reference to US sanctions. Biden responded with new sanctions over Russian interference in American elections.

Meanwhile, the Russian troops continue their build-up in eastern Ukraine and on the border with Russia. At last count, there were 30,000 troops and 3,000 officers. Moscow claims that these troops are there for regular manoeuvres designed to react to the introduction of NATO troops in western Ukraine. It ominously added that they will be used if NATO reacts to the current build-up.

A Biden-Putin summit is clearly needed as soon as possible. The world cannot rely on Lady Luck in Ukraine.

America lost. It has joined other imperial powers—mainly Britain and the Soviet Union—in filling thousands of graves in the mountains, hills and plains of Afghanistan. More than 4,400 NATO troops of which 2,488 were American have died in the past 20 years. In addition, an estimated 43,000 civilians and 70,000 Taliban fighters have lost their lives. America’s longest war is estimated to have cost the US Treasury $2 trillion, and its NATO allies $525 billion. Afghanistan has been a melting pot, trade route and gateway to the riches of India for centuries. The Mughals conquered northern India through Afghanistan and the British fought three Afghan Wars to keep the Russians out of India. After the Third Anglo-Afghan War, King Amanullah Khan moved to modernise Afghanistan. Inspired by Ataturk he secularised the strongly Islamic laws to allow co-education and other rights for women and introduced limited political rights. This never right down with the Mullahs who continued to hold sway in the remote mountainous villages of the Hindu Kush which covers three-quarters of Afghanistan. The final straw for the fundamentalists came in April 1978 when the Marxist People’s Democratic Party grabbed power and started a major crackdown on fundamentalists. Civil war broke out and in December 1979 Moscow invaded in support of their communist clients. Their defeat after ten years was a major factor in the collapse of the Soviet Union and the rise of the fundamentalist-inspired Taliban who was nurtured in Pakistan’s Madrassas.  With the help of Pakistan, the United Arab Emirates and Saudi Arabia they fought their way to power in 1998 and introduced a medieval form of Sharia Law. They also provided a base for Osama Bin Laden and Al Qaeeda whom they refused to relinquish after the 2001 9/11 attack on the World Trade Centre. The result was an Anglo-American invasion which toppled the Taliban from Kabul in just two months. But the Taliban did not disappear. It regrouped in bases in Pakistan and fought back. It now controls roughly 90 per cent of Afghanistan and will no doubt soon topple US-supported President Ashraf Ghani. But will they again become a base for international Islamic terrorism? Will their brutal suppression of women’s rights be too much for the West to bear? Will the 14 ethnic groups with three main languages collapse into civil war in the absence of a common foreign enemy? It is clear, as both Trump and Biden, has said that there is no military solution to the problem of Afghanistan. But is there even an acceptable political solution, or is Afghanistan like chronic cancer—manageable, treatable but incurable and gets you in the end.

Minneapolis used to be best known for Lake Itasca, the source of the mighty Mississippi. Then there is juicy Lucy, a delicious cheeseburger with the cheese inside the meat. And, of course, the famous Mall of America is only a stone’s throw away. Now, it is infamous for the police killing of George Floyd, the subsequent Black Lives Matter riots and the trial of his alleged killer Derek Chauvin And this week for the “accidental “shooting of 20-year-old African-American Daunte Wright in the Minneapolis suburb of Brooklyn Centre. On the face of it, Minneapolis is not your typical racial hotspot. African-Americans comprise only 20 per cent of the population (Detroit is 79 per cent, Black). Mayor Joseph Frey has well-established liberal credentials and Police Chief Medana Arradondo is African-American. But that is not the whole story. Blacks maybe 20 per cent of the population but 60 per cent of all police shootings are of African-Americans, and in his days as a young police lieutenant, Chief Arradondo sued his own force for racism. The problem appears to lie with the Police Officers Federation of Minneapolis and, in particular, its Trump-supporting leader Bob Kroll who has fought hard to keep the 800-stong force predominantly White. Kroll himself has been involved in three police shootings and 20 internal affairs investigations. He called George Floyd a “violent criminal” and branded protesters “terrorists.” The good news is that he has finally been forced out of office.

Two men have dominated British news this week. The late Prince Phillip has been praised as a man who gave up an exciting naval career for a life of service and duty to the Queen and country. Former conservative Prime Minister David Cameron is being castigated for using his previous position at the top of the political tree for personal gain. I like to think that most of us aspire to the perceived lofty ideals of Prince Philip. Unfortunately, the realities of life too often block that route. We also like to think that our politicians enter that profession to pursue those ambitions because of the immense and priceless satisfaction and respect that can be earned. The case of David Cameron, however, underscores that too many political leaders seek public office for personal gain. It is not a new problem. The Greek cynic philosopher Diogenes pounded the streets of ancient Athens with a lamp in search of an honest man. Sir Robert Walpole is known not only as Britain’s first prime minister but also as one of its most corrupt. In modern times the businessman Mo Ibrahim set up a $5 million prize for African leaders who voluntarily transferred power through democratic institutions. Since it was founded in 2006, the prize has only found three recipients. There are an abundance of examples of corruption in American politics, the last tenant of the White House is a prime example. The former president of France is in court, as is the prime minister of Israel. Malaysian Prime Minister Najib Razak has been sentenced to 12 years imprisonment and handed a $400 million tax bill after a corruption scandal involving $700 million. In Japan, there is a historic “obligation” structure embedded in the national culture whereby each favour requires a corresponding return favour. In the developing world, bribes are a fact of life at every level of society, created by low or no pay for government officials. Corruption is a perennial and international problem. It has always been with us but is probably made worse in the 21st century by 24/7 news and the worldwide web. But that should not stop us from aspiring to the example of Philips over Davids.

Observations of an Expat: Shifting Goalposts