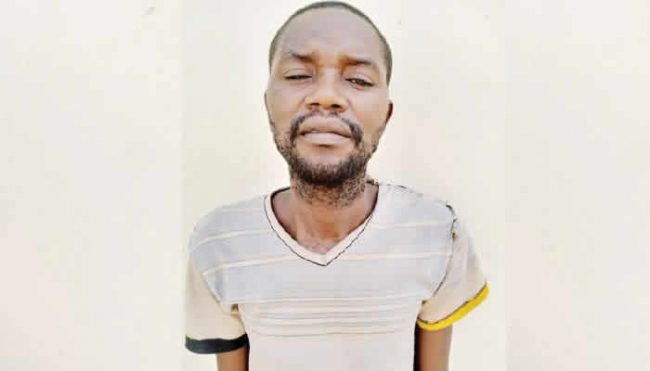 A businessman, Osondu Nwachukwu, who operates a sachet water factory in Lafia, Nasarawa State has met his untimely death when a man from the Eastern part of Nigeria connived with the Fulani kidnappers and abducted him.

The bubble bosted when a suspected member of a kidnap gang, Bello Mohammed was arrested by the Nigerian Police.

Mohammed and four other members at large identified simply as Maikano, Dogo, Hassan and Jubril reportedly carried out the act.

He was arrested on March 11 by operatives of the Inspector-General of the Police Intelligence Response Team after the case was reported to the police.

City Round learnt that the gang kidnapped Nwachukwu from his house and contacted his wife to pay N5m ransom.

The wife reportedly appealed to them to collect N40,000 and was told to drop the money at a designated point in the bush.

“Before she could deliver it, they butchered her husband and put his corpse in a sack,” a police source said.

The suspects were about to dispose of the remains in a bush in the Bukan Koto area along Makurdi Maraba-Ankunza road when some men, who were going to a mosque to pray, saw them conveying the sack in a wheelbarrow.

They reportedly abandoned the sack and ran away when the worshippers, who were suspicious of the gang, demanded to know the content.

The source added, “They saw the corpse of the victim and reported the matter to the police. Acting on credible intelligence, detectives were able to arrest one Bello Mohammed, a native of Lafia Local Government Area, Nasarawa. He confessed to the crime and said that he is part of a kidnapping and cattle rustling gang.”

Mohammed, 37, a farmer married with two wives and eight children, said his brother-in-law, Dogo, persuaded him to join the kidnap gang when he (Mohammed) complained that things were hard for him.

He explained that an unnamed Igbo man in Lafia contracted the gang to kidnap Nwachukwu.

Mohammed stated, “He told us that the man owned sachet water business but was stingy. He assured us that the man would pay at least N10m because he was rich. He gave us all the details about his movement and advised that the best place to abduct him was his house.

“We went into his house on three motorbikes around 8.30 pm and loitered around his compound. Meanwhile, one of us waited for him at the factory area and followed him home. It was the gang member who alerted us that they were on the way to the house.

“As soon as he drove into his compound around 9 pm, we followed and overpowered him. We searched his house for valuables and dragged him along. We carried him on our bikes and threatened to kill him if he raised the alarm. When we got to a spot, we stopped and trekked for hours into Bukan Koto forest in Lafia.”

He said while at their camp, the mastermind phoned in and they told him Nwachukwu’s wife said the family could not raise the N10m ransom.

The suspect stated, “He said the wife was lying and not serious to save the life of her husband. Unfortunately, the man overheard our conversation and was able to identify the person that gave us the job. The man told us to kill him after collecting the money.

“We were ready to spare him but his wife was not making any serious effort. So Dogo got angry and said that he was no longer interested in the job. He used his machete to cut off the man’s head.”

“Dogo butchered him and packed his remains in a sack. Two others and I were given the body to dispose of it at the nearest river. We used a wheelbarrow to carry the butchered body but we were stopped by some Fulani men returning from the mosque. We all left the corpse and ran away. I guess they were the ones who reported the matter to the police.”

The deceased’s wife, who spoke on condition of anonymity, said she was at home with her husband and their children on November 30, 2019 when the kidnappers struck and abducted him.

The mother of six stated that later she received a call from the kidnappers, demanding N40m ransom from her if “I want to see my husband alive.”

She said, “I pleaded with them to have mercy as it was Friday and banks had closed. They asked me how much I had and I told them N40,000. They asked me to bring the money which I did that night.

“I was waiting for them when I received a call that I should not bother again because my husband is dead. I was told that the person that arranged his abduction is from the East but I did not suspect anyone at all. God will punish the person behind his kidnapping and death.”