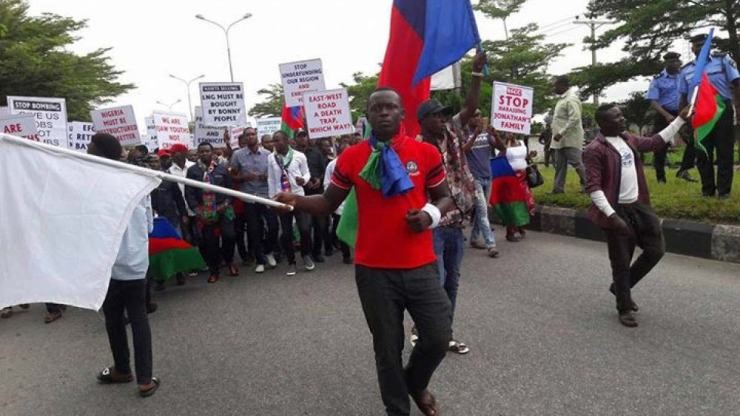 Ijaw Youths Council Worldwide has Friday stormed the Rivers State office of the Niger Delta Development Commission, situated at Olu Obasanjo Road in Port Harcourt where the staff were chased away staff and the office shut.

The entrance of the NDDC building was blocked with palm fronds and bottles of alcoholic drinks to prevent their staff entry.

The development led many of the staff to run out for fear of being attacked by the protesting youths of Ijaw Youths Council Worldwide.

IYC who disclosed that they were acting on the instruction of the IYC President, Peter Igbifa, hoisted their flags at the NDDC gate and demanded the sacking of the Minister of Niger Delta Affairs, Senator Godswill Akpabio.

They maintained they will occupy the facility until their demands are met.

Speaking in this regard, the IYC Information Officer, Eastern Zone, Jim Samson said the protest was peaceful and that nothing was vandalized at the complex.

His words: “We are asking for the sacking of Akpabio because the NDDC is under his Ministry. He is pushing that the NDDC Interim Administrator, Effiong Akwa, should stay in office for the Forensic audit to be completed.

“Now the International Oil Companies are to pay 1.6 billion pounds to the NDDC which he wants to control and use for political reasons come 2023.

“So, we are saying don’t give them the money. Let the NDDC board be set up so that there will be an equal representation.”

You will recall that on Thursday the youths shut the interventionist agency’s corporate headquarters along the Eastern By-pass in Port Harcourt and brought activities to a halt.