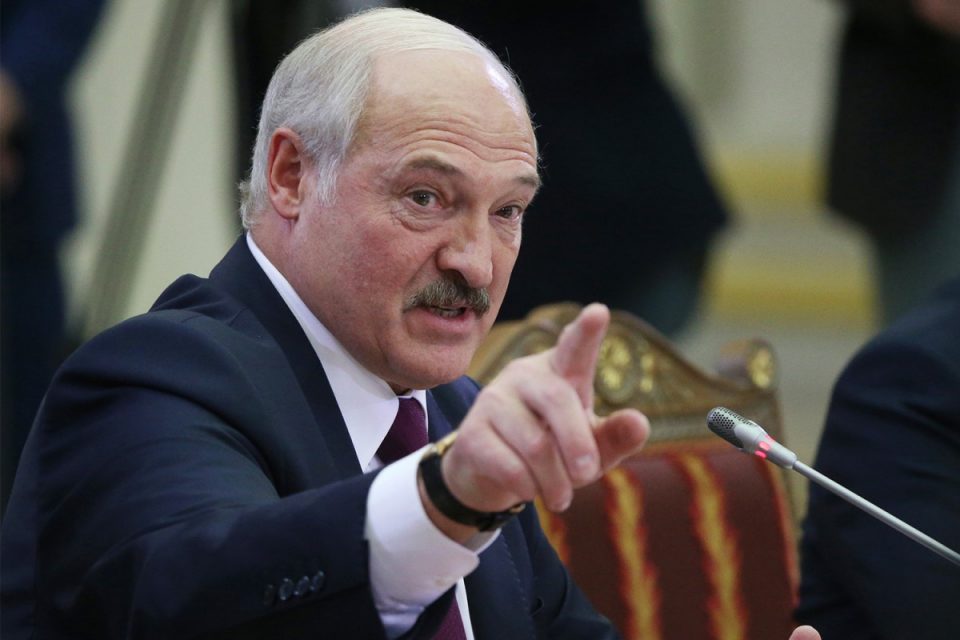 Often referred to as Europe’s last dictator, Belarussia’s Alexander Lukashenko can blatantly break international law with an act of air piracy and kidnapping because he thinks he can get away with it. He feels politically secure.

He feels secure because he has total backing from Russia’s Vladimir Putin who regards the maintenance of a pro-Russian Belarus as vital to Russia’s national interests. And because he knows that the rest of the world—especially the European Union—is frightened of stepping on the toes of the Russian bear.

Belarus is up there with Eastern Ukraine and Crimea as Russian Red Lines the West must not cross. Putin has made it very clear that doing so would have “consequences.”

So why has the Russian president dipped his line-painting brush in the red paint? Putin is not interested in isms, whether they be liberalism or capitalism or communism or socialism. His philosophical guiding stars are the twin 19th century political philosophies of geopolitics and realpolitik, with the simple goal of defending the Russian Motherland with defensive expansion.

Belarus is a key to Russia’s paranoia-driven foreign and defence policy.  For a start, it lies in the middle of the North European Plain which stretches from Moscow to the Atlantic coast. This fertile flatland is the breadbasket of Europe. It is also the traditional invasion route linking Russia and the West. It is the broad avenue along which both Napoleon and Hitler marched and Stalin attacked back. Putin is determined to move the Russian-controlled end of the North European Plain as far to the West as possible.

Belarus is independent—but becoming less so as Lukashenko’s dependence on Putin grows. However, Minsk and Moscow have a close bilateral military alliance. The two armies and air forces hold exercises. There are no combat Russian troops based in Belarus. The only official Russian military presence is two communications centres. But Putin has the right to move his tanks through Belarus towards NATO allies Poland and the Baltic States without even bothering to ask for permission.

There is also the fact that on the other side of Belarus is Kaliningrad. The armed to the teeth military enclave sits in the northeastern corner of Poland and borders the Baltic. Only a tiny strip of Polish territory—and a larger piece of Lithuania—separates Kaliningrad from Belarus. The enclave hosts a total of 26 military groups involving the Russian Navy, Air Force and Army and their readiness and numbers have all been increased over the past two years.

In Putin’s diplomatic playbook, supporting opposition groups questioning the validity of the clearly rigged presidential elections of August 2020 is a major step towards his Red Line. That is because it could lead to regime change with the Lukashenko dictatorship being replaced by a pro-Western anti-Moscow government which would be clearly against Russia’s national interests.

That is why Putin has given unquestioned support as Lukashenko has arrested 35,000 protesters who have taken the streets in opposition to his government. It is also why Putin has opposed every sanction imposed by the West since the election and is backing Lukashenko’s air piracy to the hilt.

The EU for its part has been less than firm in dealing with both Belarus and Russia. The sanctions it has imposed have been ineffectual. But then most sanctions are. Studies have shown that in the 155 instances of sanctions being issued since 1945, only 15 could be rated a success.

One of the reasons for ineffectual EU sanctions is Europe’s divided common foreign policy. It has the trappings of a diplomatic goliath but the power of an unarmed David. There is a diplomatic service, a High Representative for Foreign Affairs and an ambassador accredited to every member of the UN. Officially the foreign policies of the 27 members of the EU are coordinated at every level from ambassador to ministers meeting in the Foreign Affairs Council. Unofficially, the different governments can go their own way if they don’t like a policy. Or they can block or dilute its implementation at the commission or in the council. The Visegard Four countries of Eastern Europe have repeatedly done this in relation to actions against Belarus, Russia and China.

This creates frustrations for the rest of the world. They need Europe to take the lead on Belarus as it is EU countries that are most directly affected by Lukashenko and his Russian patron. The current case of air piracy is a good example. It involves a plane owned by an Irish company, registered in Poland and flying between Greece and Lithuania—all EU countries. The kidnapped journalist, 26-year-old Roman Protasovich, is Belarussian, but he has been granted asylum status in Poland. The US, Canada and other countries need a united European lead.

But there is another reason for Europeans—and the rest of the world—to avoid an ultra-tough line on Belarus. They know that when Putin says Red Line he means just that. Regime change is not in the interests of the West. Truly effective sanctions support for the Belarussian opposition could lead to regime change.

The West would dearly love a return to the pre-election days of the Lukashenko dictatorship. They disliked his human rights policy, but they managed a working relationship and at least there was no immediate danger of military conflict. The problem is that Lukashenko’s actions are impossible to ignore and all parties have moved dangerously closer to the Red Lines.

Hamas has declared victory in its latest war with Israel. Victory? Some victory when its jerry-built rockets failed to penetrate Israel’s “Iron Dome” and 248 Palestinians died, including 66 women and children. Some 1,900 were wounded. Israeli casualties were one soldier and 12 civilians including two children. But despite the lopsided buther’s bill, Hamas is insistent that they won. This is because their David is still standing after another onslaught from Goliath Israel. Hamas is playing the long game. In fact, they make the Chinese look like short-termists. They are betting on the rest of the world, especially the United States, eventually tiring of their blank cheque support for Israel. When that happens, they believe the Jewish homeland will crumble and the one-state solution will be achieved—a Palestinian state. The problem with their strategy is that it is a linear route. It fails to take into account the unplanned metaphorical political twists, turns, fallen trees, potholes and avalanches that bedevil political relationships.

It looks as if Senate Republicans will be able to block a congressional inquiry into the Capitol Hill Riots. But then why do we need such an inquiry in the first place? Congressional inquiries are by their very nature political and at this moment in American history, they are more political than usual. What occurred on 6 January on Capitol Hill was a criminal act. The culprits may claim that they had a political purpose, but the tactics they employed in pursuit of that purpose were criminal. They destroyed property, assaulted police, were responsible for five deaths and 179 injuries, threatened to kill the Vice President and the Speaker of the House and conspired to overthrow the US constitution. These are all criminal undertakings. They should be handled by the criminal justice system. And they are. So far 498 people have been charged by the police and FBI in one of the largest investigations of its kind in American history. A significant proportion of those indicted will end up in front of a judge and jury where the evidence for and against them will be forensically examined—including possible links to Donald Trump and the Trump organisation. That is the proper forum for alleged criminals. Not before a panel of Congressmen and/or Senators who put partisan point-scoring before the truth. For once the hypocritical flip-flopping Senator Mitch McConnell is right, albeit for the wrong reason.

Another week. Another mass shooting in America. Actually, it is more than one mass shooting a week as 250 have died so far in incidents involving four or more victims (the definition in the US of a mass shooting), and we are not yet halfway through the year. The latest shooter was 57-year-old “sad, lonely and highly disgruntled” Samuel Cassidy who killed nine of his colleagues before turning the gun on himself. Simultaneously, Texas Governor Greg Abbott was preparing to sign into law a bill allowing Texans to carry handguns openly and/or concealed without the need for a permit, license or any vetting. Texas will become the 19th American state to allow the permit-less carrying of handguns. Governor Abbott says Texans need the law to protect themselves and wants to make Texas a “Second Amendment Sanctuary State.” The state’s own police chiefs say that the new law will endanger citizens and the police paid to protect them. There is, however, one group that will still need a license—convicted felons. But then how will the gun salesperson know that the man or woman on the other side of the counter has spent time in jail? I suppose that they will just have to trust the honesty of the rapists, murderers, bank robbers, fraudsters, muggers and burglars.

The British public is faced with a tough choice: Which liar do they believe? Should it be their floppy-haired prime minister Boris Johnson who took them out of the EU and is now leading a “world-beating” vaccination programme; or should it be the PM’s former chief adviser, the Rasputin-like Dominic Cummins who was regarded as the evil power behind the throne before being ousted from 10 Downing Street in a palace coup led by Johnson’s fiancée Carrie Symons. The choice was presented by Cummings in a seven-hour explosive no-holds-barred testimony before a parliamentary committee in which he accused Boris Johnson, Health Secretary Matt Hancock and the government in general of being long-nosed Pinocchios whose incompetence in managing the coronavirus pandemic caused the deaths of tens of thousands. Both men have formed in the mendacity stakes.  Boris has lied to his wives, his readers, his editor and the voting public. He was one of the worst—possibly THE worst—British Foreign Secretary. He issued a continuous stream of lies about the NHS, Northern Ireland, trade deals, fishing rights and the eating of cake to win the Brexit vote. Dominic Cummings was the architect of those Brexit lies. The problem for Boris is that the public suspected their prime minister of mendacious incompetence before Cummings’s testimony. His former chief adviser has merely filled in a few gaps and confirmed the voters’ worst fears.

Britain continues to pay the diplomatic price for Brexit. This week Hungary’s populist right-wing, Euro-sceptic, anti-immigrant, anti-Islamic, Prime Minister Viktor Orban—who is also clamping down on freedom of the press, academia and independence of the judiciary—is receiving the red carpet treatment at 10 Downing Street. Under fierce pressure from the Liberal Democrats and Labour, Boris Johnson has promised to press Orban on his human rights abuses. But the fact is that actions speak louder than words. A welcome mat at Downing Street is good optics abroad and with voters back home. Orban needs the kudos. He is a year away from a general election and his voters are unhappy with the expulsion of his governing Fidesz Party from the European Parliament’s right-wing grouping, the European People’s Party. Neither do they like his support for Belarus, Russia and China or his attacks on Joe Biden. For his part, Boris needs support inside EU councils. Orban’s Euro-scepticism and support for Brexit makes him the logical starting point. He is also the leading figure in the four-nation Visegrad group of Eastern Europe. His visit to Downing Street is in the role of the current president of the group. The problem is that by allying himself with the “illiberal” elements of the EU Boris Johnson is alienating Britain from the wealthier and more liberal countries such as Germany, France and the Netherlands.