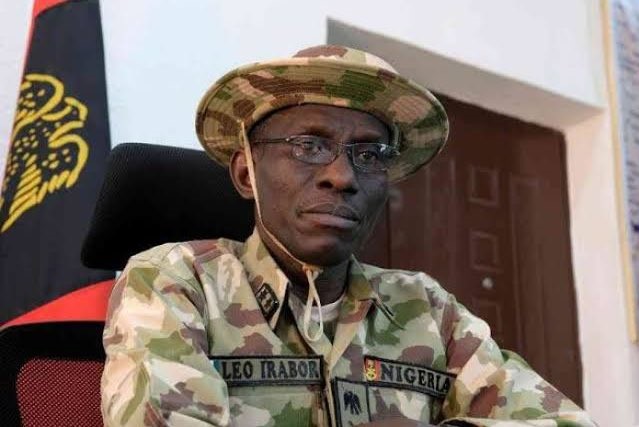 General Lucky Irabor, the Nigeria Chief of Defense Staff, CDS, has consulted the assistance of some retired senior military officers to put an end to the insecurity challenges bedevilling the country.

This is just as he also debunked claims that some soldiers are conniving with terrorists to attack their victims.

According to him, the military and other security agencies are not conniving with terrorists in carrying out their attacks with precision as insinuated by some Nigerians.

Irabor dismissed this claim in Ibadan during an interaction with some retired senior military officers in the southwest zone of the country, held at 2 Division, Nigerian Army, Ibadan.

While speaking with the ex-servicemen, Gen. Irabor told the ex-servicemen that it was preposterous to think the military and other security agencies are conniving with bandits to carry out their attacks.

The Army General however pointed out that it was not impossible that the criminally minded individuals may take advantage of the technological tools available to them to perpetrate their evil acts.

He explained that it was for that reason the military, on a daily basis reassess its personal engagements to ensure that these bad elements are exposed.

Irabor said: “It is preposterous to think that the military and other security agencies are conniving with bandits. Do you connive with someone to take your life?”

“That of course, is a question that should dismiss that kind of hallucination anyway. All you need to know is that on a daily basis, because of the technological tools available to every one of us, it is not impossible that the criminally minded individuals may take advantage of these tools.”

“And that is the reason on a daily basis, we are reassessing our personal engagements to ensure that not should our engagements be intelligence-driven, we equally know that these bad elements who live amongst us need to be exposed.”

“And that is why we believe this kin o interaction is necessary. So, anyone who is hallucinating with the idea that the military or other security agencies are conniving with bandits, I think the person needs to have himself checked.”

Speaking on the reason for the interaction with retired senior military officers in the southwest, Gen. Irabor said: “We are here to tap from your wealth of experience and knowledge you have acquired while in service in order to move our nation forward, through tackling the issues of insecurity challenges the country is facing.”

“You know that currently there are various security issues, and we have identified our retired colleagues who of course are sold out, that is, we serving and those of them that are retired, we are all sold out to the unity, faith, peace and progress of our nation.”

“That speaks to their sense of patriotism and zeal. So, we believe in their retirement that, they will be better instruments of sensitization of those who live around them on issues bothering peace and security. This interaction is actually for us to rub minds together; they will equally speak to us as to what they observe that we need to do and what we also observe that they need to do in their various communities all in the hope of improving the state peace across the country.”

“And we will after this southwest geo-political zone, also be going to other geo-political zones, and I think that we can only leverage on the wealth of experience they have to be able to do this, and I believe it will be better for every one of us at the end of the day.”

On his part, the General Officer Commanding (GOC) 2 Division, Nigerian Army, Maj. Gen. Gold Chibuisi in his address explained that the interaction was meant to brainstorm with the retired senior officers prefer solutions to the security challenges in Nigeria.

Chibuisi  said: “The platform is meant to brainstorm on ways to solve insecurity challenges battling the southwest geo-political zone of the country.”

“Nigerian Army  fully engaged in combating the insecurity challenges facing the country, such as banditry, Boko Haram and ISWAP terrorist attacks, farmers and herders crisis, and various attacks, these attacks called for serious concerns for all Nigerians, and that is why we are all here today to discuss the way forward on ways to proffer solutions to all these crises.”

“I want to commend the Chief of Defence Staff, General Leo Irabo in his wisdom for organizing this platform so we can tap from the wealth of experiences of our retired senior officers, with the aim of fashioning out ways to tackle the insecurity challenges the country is currently facing.”