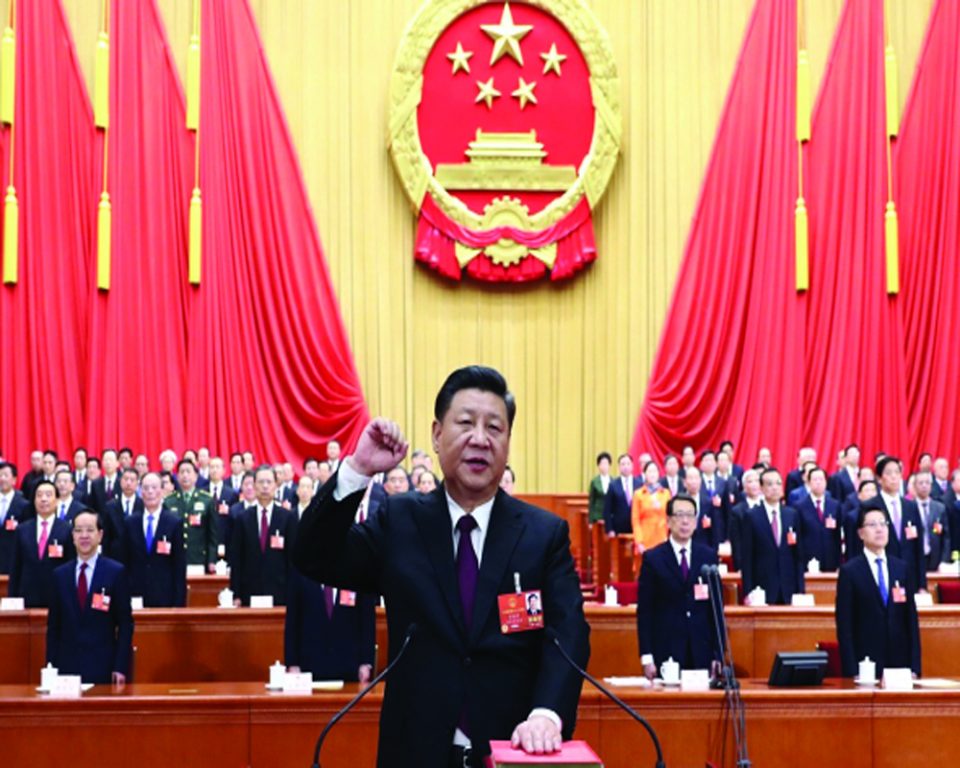 There were massed choirs, bands, marching soldiers, clapping children, thousands and thousands of red and yellow balloons and a military flypast. Some 72,000 hand-picked and thoroughly vetted party members packed into Beijing’s Tianmen Square to perform a carefully choreographed warm-up act for a speech by President Xi Jinping to celebrate the 100th birthday of the Chinese Communist Party.

The main thrust of Xi’s address was that the Communist Party was now China and China was the Communist Party. The two entities have been declared indivisible. The Mandate of Heaven has fallen on the shoulders of the party’s leadership and that the only way that China can continue to develop and take its natural leading place in the world is through dogged loyalty to the diktats of the Chinese Communist Party.

And beware, warned Xi, of anyone who gets in their way. “We will never allow anyone to bully, oppress or subjugate China. Anyone who tries will find themselves on a collision course with a steel wall forged by 1.4 billion people.”

The threatening passage was clearly aimed at the US and its Allies. It won the biggest cheer of the day. It was meant to.

It was preceded by a sister passage that painted a picture of a benevolent Chinese Communist Party (China) on the world stage. “We have never,” said Xi, “bullied, oppressed or subjugated the people of any other country, and we never will.”

Rubbish. And if you want testimonies to that effect go to Hong Kong, Tibet, Xinjiang, Taiwan, Vietnam, Korea, The Sino-Indian border, the South China Sea, the East China Sea….

The Chinese have been oppressing and subjugated other cultures and countries since The Shang Dynasty sprang into being in the Yellow River Valley roughly 3,000 years ago. Since then a series of Emperors have claimed cultural superiority to justify an almost continuous expansion of their borders.

Xi does not call himself an emperor. He is a president, but that is mere political semantics. In the eyes of the Chinese people, the mandate of heaven has fallen on his shoulders just as it did on the shoulders of the Shang’s first emperor Cheng Yang. An emperor, after all, rules over an empire.  And an empire is defined as a political unit in which one country rules over others.

Another factor is that the Chinese Empire is contiguous. They weren’t global colonisers in the same way as many of the Europeans. They were expanding their borders and civilising their neighbours.

In that respect, the Chinese have much in common with arch-enemy America. They both claim to be anti-imperialists while having created contiguous empires. They claim that they don’t subjugate or oppress. Tell the Native Americans that. Archaeologists and Anthropologists reckon that there were 15 million Native Americans in North America when Christopher Columbus landed in 1492. At the end of the 19th century, there were 385,000 consigned to wretched poverty on government reservations.

The Americans invented a name for their actions:  Manifest Destiny. It was their destiny to rule the continental United States and to bring the benefits of civilisation, Christianity, democracy and capitalism to the Red savages.

Both countries are endowed with a strong self-belief backed up with success stories to justify those beliefs. The danger is that unless a political understanding can be reached which accommodates the two countries they will inevitably and violently clash. The United States already dwarfs every other country in the world in military power. Xi Jinping told his audience in Tianmen Square that China would be able to match America’s military might by the end of the decade.

In international relations—as in life in general—the choice is rarely between good and bad. Instead, it is too often between bad and worse. That was the basic choice facing Joe Biden when he pondered whether or not to attack pro-Iranian militia in Iraq in retaliation for the roughly 40 attacks since January against the 2,500 US troops still in Iraq. Let’s make it clear, this was not a straightforward Trump-like revenge attack. High stakes demanded a more nuanced decision-making analysis of the consequences. Would such an attack torpedo Geneva talks on reviving the Iran Nuclear Accord? Would it demonstrate to the new hard-line Iranian President Ebrahim Raisi that the Biden Administration is determined to extend a new agreement beyond the issue of uranium enrichment? Will the death of five militiamen deter or increase the possibility of more attacks on American soldiers? What will be the reaction—formal or informal– of the other members of the P5+1 negotiating group (Britain, France, Germany, Russia and China)? Will it convince Israel that the US will deter the Iranians and thus forestall Israeli attacks?  What about the left-wing of his own Democratic Party? These and other factors were all considered before the attack and minimised or maximised after it.

Donald Trump needs money to maintain his lavish lifestyle in Mar a Lago and run for president in 2024. For the money, he has historically relied on the Trump Organisation to provide it. That corporate mulch cow is now in danger along with possibly Trump himself. The Manhattan District Attorney appears to take a roundabout—and well trusted—route of indicting a Trump lieutenant as a means of gathering more damaging evidence on the ex-president himself. This time the initial target is the Trump Organisation’s Chief Financial Officer Allen Weisselberg who appeared in court, in handcuffs, on Thursday, to plead not guilty to a long list of corporate and personal criminal charges ranging from tax fraud to grand larceny. DA Cyrus Vance Jr (son of the former Secretary of State under Jimmy Carter) has made it clear that the investigation is “ongoing” and soon after Weisselberg’s appearance, it was hinted that the CFO was “helping investigators with their inquiries” in return for a possible reduced sentence plea. Trump must be worried despite protestations to the contrary.  He will certainly be displeased at the fact that his organisations’ assets will be frozen and the banks are likely to call in their loans. He may, however, survive financially thanks to the continual stream of cash from gullible Republicans who believe that only Trump can represent them and that the “deep state” stole the election from their hero and is now pushing him into the dock.

For the first time ever, former South African President Jacob Zuma saved his country a substantial sum of money. At least for the time being. The South African court’s verdict of Contempt of Court has landed Zuma in prison for 15 months for failing to appear before the Constitutional Court for failing to answer allegations of fraud and corruption and at least postponed a lengthy and expensive court hearing.  Acting Chief Justice Sisi Khampepe said the court was sending “an unequivocal message… the rule of the law and the administration of Justice prevails.” The nine-year rule of Zuma from2009-2018 was marked by widespread corruption which international accountants believe cost the South African government $83 billion. He was able to cling to power for so long because of his dominance within the Zulu tribe which in turn controlled the ruling African National Congress. But by the end of 2017, even the Zulus had tired of Zuma’s mounting and seemingly endless cases of abuse of power. He was unceremoniously turfed out of the office with a vote of no confidence in February 2018. Since then his successor Cyril Ramaphosa has focused on repairing the damage of Zuma’s Administration at home and abroad. A key part of that damage limitation exercise was ensuring that Zuma was brought to justice despite the ex-president’s revolutionary credentials as a former inmate of Robben Island. The contempt of the Court ruling is a feather in Ramaphosa’s political cap. It is also a big boost for the South African judiciary. Throughout the apartheid years, its insistence on the rule of law was a major block to the excesses of the White regime. Now it is performing the same role against corrupt Black politicians.

To use a golfing metaphor, the Northern Ireland Protocol has been knocked into the light rough and could be on its way to the long grass. But whether it is the long or short grass, the Northern Ireland Protocol will remain in play and hold up other negotiations with the EU and probably the US as well. Basically, Brussels and Westminster have agreed to delay until September 30 the implementation of Northern Ireland’s importation of chilled meats from Mainland Britain. There are good reasons for this 1- It shows flexibility 2- Both sides want to lower the political tensions in the province, especially as it’s the middle of the Marching Season. The Protestant’s anti-Catholic drums have been muted by lockdown restrictions. But these are stuttering to a half and Orange Order marchers will be expected to be out in force through July and August. And, finally, 3- the election of hard-line Sir Jeffrey Donaldson as leader of the Democratic Unionist Party has thrown a spanner in the works and all sides need time to adjust. One possible solution being mooted to break the impasse is that chilled meats are declared an exception while other products are quietly accepted as subject to EU tariffs and the border between Northern Ireland and the Republic of Ireland remains open. This may not, however, be acceptable to Irish-American President Joe Biden who is said to be considering the appointment of a special envoy to Northern Ireland. He is entitled to do so as the US is a guarantor of the Good Friday Agreement. Biden—with the support of Congress and 33.3 million Irish-Americans—is expected to hold up any talk of a UK-US trade deal if he thinks that the Good Friday Agreement is threatened or damaged by Boris Johnson’s insistence on British sovereignty in Northern Ireland over the Protocol and implementation of the already negotiated Withdrawal Agreement. The promised US-UK Trade Deal is the jewel in the crown in Johnson’s Global Britain policy.

Israel is providing an object lesson in Covid complacency. It was the first country in the world to almost fully vaccinate its population. At the beginning of June, it registered zero new cases. On 30 June it registered 100 new cases. The population has been ordered to return to wearing masks indoors and the Israeli border has been temporarily closed to tourists—even if they can prove that they have been doubly vaccinated. The problem is the new Delta Variant which appears to be twice as transmissible as previous versions of the disease. It is causing fresh spikes in several places in the world. Russia had prided outside on having been largely missed by the pandemic. Not anymore. In less than a month it has jumped from 8,000 to 20,000 new cases a day. Globally, John Hopkins University has recorded 182,734,585 cases of Covid-19 and 3,957,585 people have died.

Earn Bitcoins Online: How To Get Bitcoins In Your Wallet