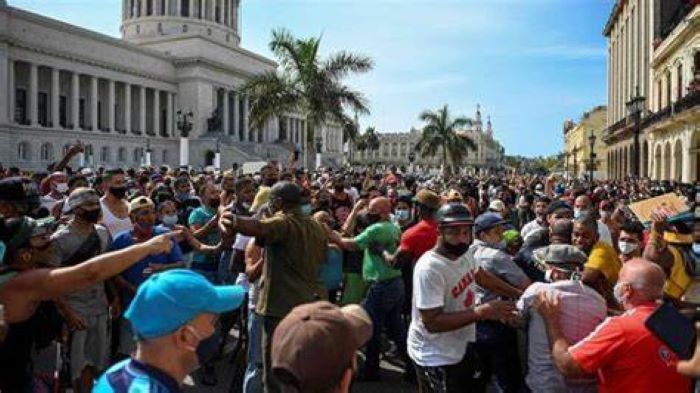 Russia, China and Iran have warned the United States that it must not intervene in Cuba after the island was rocked by major protests for which U.S. President Joe Biden cast his support.

As Cuban Foreign Minister Bruno Rodríguez railed against “the increased aggression of the U.S. government” during lengthy remarks delivered to the press Tuesday in the wake of historic anti-government demonstrations alleging shortages in COVID-19 vaccines and basic humanitarian needs, his message was echoed by three powers deeply critical of Washington’s foreign policy toward Havana, and in many other parts of the world.

In Moscow, Russian Deputy Foreign Minister Sergei Ryabkov met with Cuban ambassador Julio Garmendia Peña for a discussion earlier Tuesday in which “the Russian side expressed solidarity with Cuba’s government and people, and promised all-round support to the efforts towards the soonest normalization of the situation,” according to the Russian Foreign Ministry.

“The sides expressed confidence that the situation will return to normal soon,” the readout said, “and stressed the inadmissibility of foreign interference and other destructive actions that are fraught with the destabilization in Cuba.”

China too backed Cuba’s position as Chinese Foreign Ministry spokesperson Zhao Lijian told a press briefing Tuesday that, “the U.S. embargo is the root cause of Cuba’s shortage of medicines and energy.”

The decades-long U.S. restrictions against trade with Cuba were condemned last month for the 29th consecutive time by the United Nations General Assembly in a near-unanimous 184-2 vote. Zhao called on Biden to lift the sanctions, which were briefly relaxed under former President Barack Obama, before being reinstated by his successor, Donald Trump.

And Zhao also lashed out at any outside attempts to interfere in fellow communist-led Cuba.

“China firmly opposes foreign interference in Cuba’s internal affairs, firmly supports what Cuba has done in fighting COVID-19, improving people’s livelihood and upholding social stability, and firmly supports Cuba in exploring a development path suited to its national conditions,” Zhao said. “I’d like to stress that China stands ready to work with Cuba to implement the important consensus of the two heads of state and is firmly committed to deepening friendly relations between the two countries.”

Also critical of the U.S. role was Iran, another country subject to severe sanctions lifted by Obama and then put back in place under Trump.

“In this situation, where the United States is primarily responsible for the many problems created for the Cuban people,” Iranian Foreign Ministry spokesperson Saeed Khatibzadeh told reporters Tuesday, “it is trying to appear as a supporter of the Cuban protests and has tried to interfere in the internal affairs of this country in a blatant violation of international rules.”

Iran, he said, “while condemning the illegal U.S. sanctions, which are an important factor in the economic hardships of the Cuban people, has condemned any interference in the internal affairs of this country and as a country facing illegal and oppressive U.S. sanctions.”

While the U.S. is currently engaged in negotiations, albeit indirect, with Iran as part of an effort to return to the 2015 nuclear deal struck the same year Obama carried out a historic thaw with Cold War-era foe Cuba, no plans to reengage Havana have been announced by Washington.

Biden has instead emphasized his backing for the demonstrations that took Cuba by storm on Sunday.

The president began remarks focused on his efforts to reduce gun crime Monday by “recognizing the remarkable protests that are taking place in Cuba, with the Cuban people demanding their freedom from an authoritarian regime.”

“I don’t think we’ve seen anything like this protest in a long, long time—if, quite frankly, ever,” Biden said. “The United States stands firmly with the people of Cuba as they assert their universal rights. And we call on the government of Cuba to refrain from violence or attempts to silence the voice of the people of Cuba.”

He declined to say whether he was considering lifting the embargo on Cuba, and White House Press Secretary Jen Psaki reiterated the president’s initial message on Tuesday.

The State Department remains in the midst of a policy review of the past administration’s ongoing policies toward Cuba, which Biden previously criticized on the campaign trail last September as having “inflicted harm on the Cuban people and have done nothing to advance democracy and human rights.”

Secretary of State Antony Blinken said Monday that the policy review “focuses on the political and economic well-being of the Cuban people, and obviously, we’re looking carefully and closely at what has just happened, what indeed is happening.

Blinken also warned that “it would be a grievous mistake for the Cuban regime to interpret what is happening in dozens of towns and cities across the island as the result or product of anything the United States has done.”

FG Speaks On Prof Iwu’s Discovery Of Cure For Coronavirus