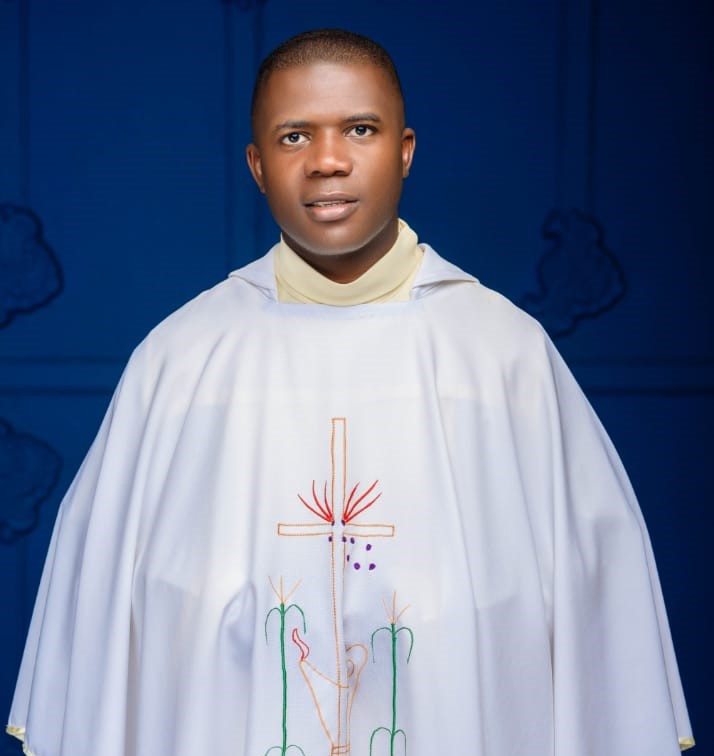 It was a celebration-galore for people of Ugwogo-Nike, Enugu East Local government area, on Saturday, June 3rd, 2021 when the community members thronged Bigard Memorial Seminary, Uwani, Enugu where their son was billed to be ordained a Catholic Priest by the Catholic Bishop of Uyo Diocese, Most Reverend Dr John Ebebe Ayah.

Catholic faithful from St. Joseph’s Catholic, Ugwogo-Nike, the home parish of the new Priest, was also at the venue to participate in the historic event and also receive the first dose of priestly blessing from the new Catholic cleric.

Although Reverend Francis Chijioke Eze, was later ordained Catholic priest alongside two others, the community members and members of Father Eze’s home parish stole the show at the Bigard Memorial Seminary with their colourful outing after defying the initial early morning rain.

Long before the ordination of the young cleric, some illustrious sons of the community in collaboration with the St. Joseph’s Catholic Parish, Ugwogo-Nike, had mobilized themselves to contribute for the purchase of a notable car gift for the new priest.

Our correspondent gathered that although that had been a long-standing rule in the community, Father Eze’s case was remarkable going by the level of overwhelming support He received. Beyond Reverend Father Eze, the community had gifted four other priests with cars when they were ordained.

Reverend Father Chijioke Eze began his voyage into the priesthood at Saints Peter and Paul Major Seminary, Ibadan, Bodija, Oyo state where he studied Philosophy, before returning to Bigard Memorial Seminary, Uwani, Enugu for his Theology studies. These were after his postulate and novitiate training at Onitsha and Benin respectively.

When the new priest emerged after his ordination as the fifth catholic priest in the catholic-dominated community, He was received by a mixture of community members and catholic faithful of his community led by the Parish Priest of St. Joseph’s Catholic, Ugwogo-Nike, Reverend Father Chimezie Patrick Ani who was flanked by other Catholic Priests from the community as well as his assistant,

“I am happy. I feel fulfilled. I am thanking God that the dream has come to pass,” Father Eze revealed in a chat with our correspondent.

Done with the ordination, the excited community members and catholic faithful journeyed back to the church compound of St. Joseph’s Parish, Ugwogo-Nike where Rev. Father Francis Chijioke Eze was gifted a 2006 model Toyota Corolla car amidst cheers by numerous catholic faithful.

Sounds of joy erupted when the cleric entered his new car and honked the horn thrice to signal that the car was in good condition for use after the car had been blessed by a team of priests from the community.

“On behalf of the entire people of Ugwogo-Nike, we are giving this our brother a gift of Toyota corolla, 2006 model,” Reverend Father Chimezie Ani, the parish priest of St. Joseph’s Catholic Church Ugwogo-Nike, declared while handing over the car key to the new priest amidst applause.

On Sunday, the following morning, after the cleric celebrated his first Holy Mass in his home parish, the celebration continued with renewed vigour when several community members and catholic faithful thronged the spacious Obinagu Ugwogo-Nike village square.

The community members in the diaspora who had returned from different states of the country to join in the celebration were also on the ground and were seen in their numbers making merriments in celebration of Father Eze’s successful ordination.

Food and drinks were everywhere as the excited villagers busied themselves with activities in celebration of Father Eze’s ordination.  The celebration came to a crescendo when one of the biggest masquerades of the community made its grand outing to the square accompanied by youths and some elderly.

While growing up, the newly ordained priest had nursed the dream of becoming a medical doctor, but his inability to meet up with JAMB’s required cut-mark for the medicine, after two attempts, blurred the dream and consequently redirected him to what he described as his ‘childhood inner desire.’

The cleric hinted: “God used my failure in JAMB to channel me and even make me rethink of what had been my childhood inner desire.”

On what motivated him to go into Catholic Priesthood, the Reverend Father said the conduct of Catholic Priest and discipline, as well as their manner of approach, usually thrill him coupled with the fact that He came from a catholic family. He added that his late father’s wonderful stories of how Irish Reverend fathers had trained and cared for him while he was living with the missionaries also played a role in triggering his love to become a priest.

“So, all those (my Dad’s) stories motivated me to be like them (the Irish missionaries),” He said.

When the young cleric presented himself for possible enrollment into the Seminary school, he met about two hundred other applicants who had come for the interview, where people expected to resume that same year would be selected.

Interestingly, the new Priest was among the nine candidates who were successful at the end of the thorough interview exercise. The sign that God was interested in him came when Reverend Father Eze became one of the three people shortlisted to be ordained on 3rd July 2021.