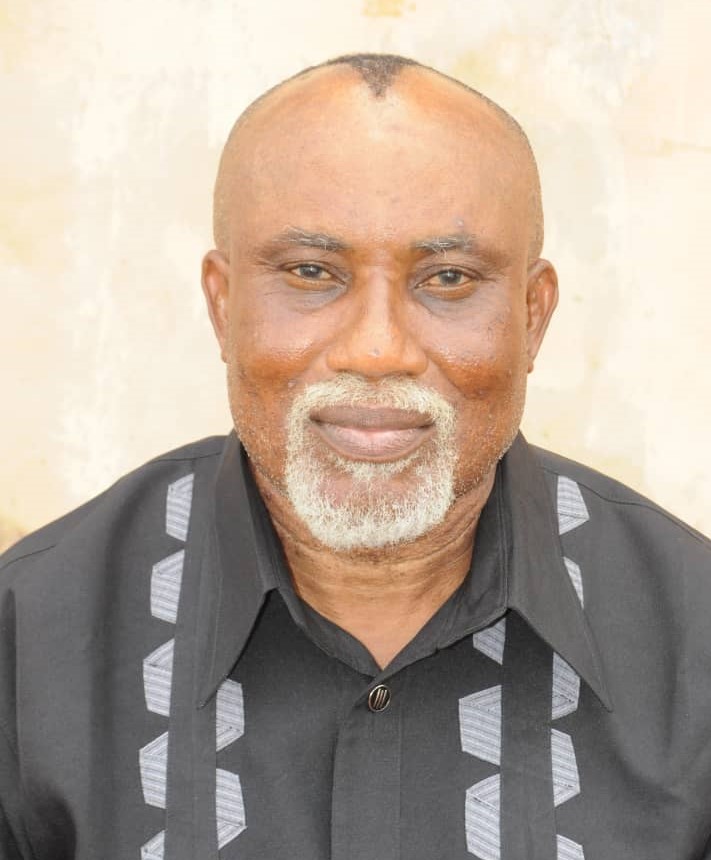 For many tourists and other visitors at the Unity Park Enugu, the Sculptural designs and other interesting monumental concrete mouldings that catch the eyes of the recently commissioned Enugu’s tourist centre must have received the touch of foreign professionals sculptors going by the quality of the sculptures.
Earlier, while commissioning the tourist centre in late May, Enugu state governor, Ifeanyi Ugwuanyi had explained that the centre was conceived by his administration following the de-zoning of most of the residual Open Spaces and Recreation centres in the state, in an attempt by successive administrations to increase the housing stock in the city.

While hinting that it was widely believed that the sculpture of a giant roaring lion at the park currently interrogates existing world records on lion sculpture, Gov. Ugwuanyi added that the rezoning resulted in the replacement of natural environments with artificial structures noting that “the serene ambience of the Unity Park is like no other and conduces to relaxation, deep reflection and critical thinking” while “the background tranquilizing songs of birds that visit the water pond to quench their thirst will lift your mood.”

But unknown to many, Dr Okay Ikenegbu, Chief lecturer in sculpture, department of fine art, Institute of Management and Technology (IMT) was the brain behind the eye-catching sculptures in the tourist centre.
Born in Port Harcourt, Rivers state in 1958, Dr Ikenegbu has a Bachelor’s and Master’s Degrees in Fine/Applied Arts and Sculpture, respectively. He also holds a PhD in Art History, all from the prestigious University of Nigeria, Nsukka (UNN), where he also lectured for eight years.

The renowned Sculptor, an indigene of Achi, in Udi Local government Area of Enugu state, has since attained a height in sculpture having participated in several national and international exhibitions and has won numerous accolades. Some of the exhibitions he participated in include the 2010 Nigeria at 50 Society of Nigerian Artists held at the Council of Arts and Culture, Abuja, the 2009 Society of Nigerian Artists at Coal city, Enugu among others.

The biggest of the monuments which stand, noticeably, at the centre of the park and sculptured by Dr Ikenegbu, is the majestic concrete roaring lion sculpture measuring 42 feet high, 72ft long and 24ft wide.
Located adjacent to the popular Michael Okpara Square, Independence Layout, Enugu, the tourist centre, strewed with eucalyptus trees, compels repeated glances at the Lion Sculpture.

“God gave the talent and God was the one that gave the wisdom,” Dr Ikenegbu, who is also the director, School of art, design and printing technology, IMT, told our correspondent in an interview.
The talented Sculptor was quick to commend the state governor, Ifeanyi Ugwuanyi for funding the project stressing that, without the governor’s support, the project would have been an impossibility. 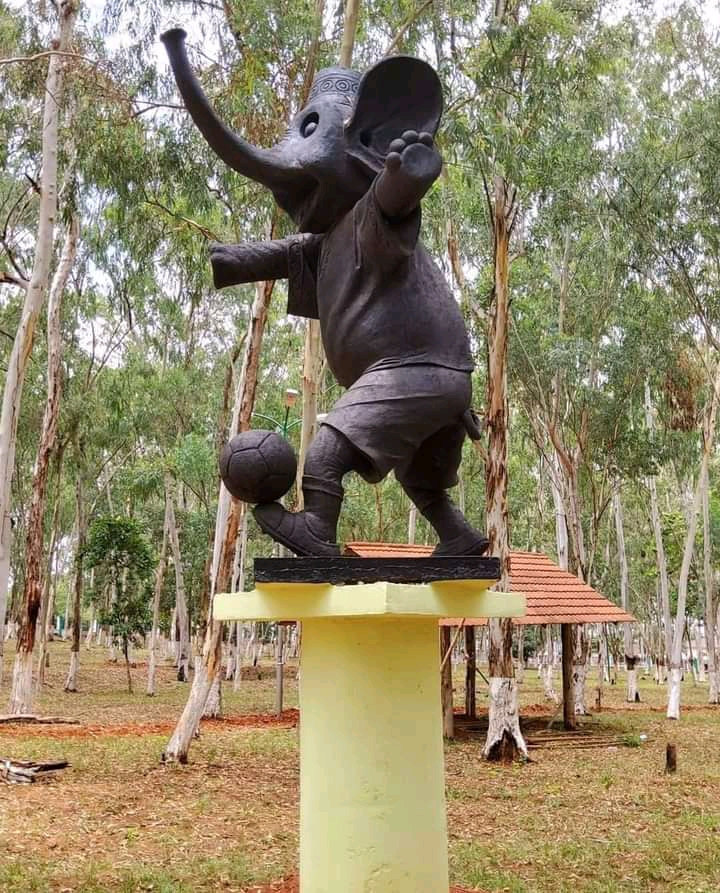 Asked how long the magnificent roaring Lion Sculpture took him, Dr Ikenegbu said, “Well, one can say upwards of fifteenth months, from November 2019 to March 2021.”
The Sculptor also confirmed to this reporter that He was the one who proposed the sculpture and designed it. He added that although it was awarded to the Institute of Management and Technology (IMT), He was the one who made the proposal for the glorious roaring lion sculpture.

He said, “Government (of Enugu state) gave it to IMT to do and I was the one that did the proposal and because I am also in charge of Sculpture in IMT, I designed it.”
Dr Ikenegbu was, however, unable to estimate the cost of the Lion Sculpture saying the cost could not be comprehensive at the time revealing that installations are still ongoing inside the Sculpture. Some of the installations expected to be completed, according to him, included air-conditioners and an elevator fixed in one of the lion’s limbs to enable physically challenged persons to climb Lion’s interior.

Worthy of note is the fact that the Lion Sculpture houses a large hall, with two floors, where events such as Birthdays, Meetings could be held with the capacity to accommodate more than fifty people at a time.
The frontal limb of Lion’s sculpture has a spiral stairway that visitors could use to ascend as well as descend the hall. At the right frontal limb, lies an emergency exit ladder, in the event of danger.

“The interior is like a hall. It will accommodate more than fifty people. That’s for the first floor. The second floor will take you to the mouth of the lion from which you can be looking down to have a panoramic view of the environment,” Dr. Ikenegbu confirmed to this reporter.

Beyond the gigantic Lion Sculpture, the Park is a home to other numerous artistic carvings and structures such as 19km pedestrian walkaways, four feet-deep water ponds, water channels, which Dr Ikenegbu confirmed he designed all of them.
Other features include Sheltered relaxation areas, children’s play area with swings and sand dunes. At the night, the park is said to be illuminated with 400 lamps powered by both the national grid and solar energy sources.

“I also designed the pond, I have designed these sculptures and I also did the walkaways. Also did the water channel,” the sculptor said pointing at the monuments.
According to him, the park is intended to provide an avenue for people to have a romance with nature and to have reflection and meditation. He added that it is a serene environment where people can purge themselves of worries.

He revealed, “This place is a treasured place because there is no place like it in Enugu state. There are no open spaces (in Enugu) whereby people can come and have that quietude (like in Unity Park.”
Dr. Ikenegbu, however, reminded intending visitors that there are standing rules in the park and urged them to keep to such rules. The academic could not confirm if visitors are required to pay to use the Park, although he hinted that the governor had, initially, said that he was not interested in making the tourist centre “a revenue-generating structure, but just to allow people to have a feel of nature.” 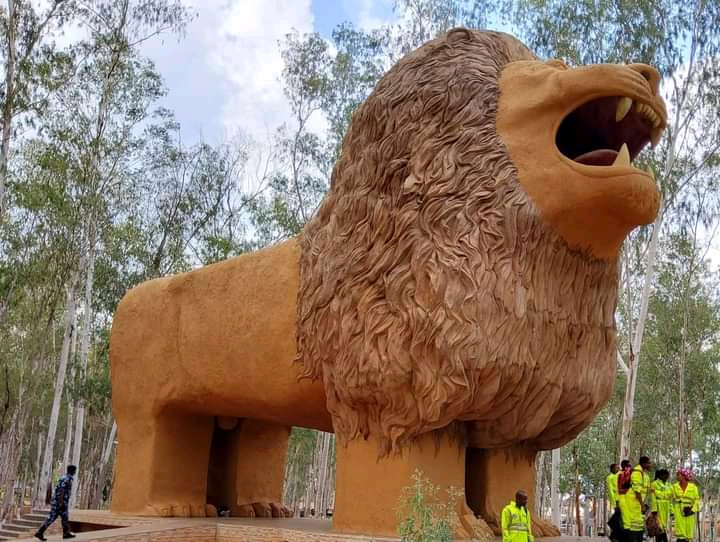 While listing some of the standing rules, the award-winning sculptor said, “in coming here, there are rules: don’t litter the environment. Leave the walkways, don’t come here to drink alcohol or make noise. Because the other person is there. So, everybody has to do considered.”
Dr Ikenegbu applauded Governor Ifeanyi Ugwuanyi for his landmark achievements in the state and his commitment to the speedy completion of the Unity Park describing the governor’s administration as ‘Marvelous.’

However, the grand Lion Sculpture at Unity Park is not the sculptor’s first voyage into the world of sculpture. Far from it, the UNN-trained Sculptor had done several award-winning sculptural works both nationally and internationally. For instance, the 2009 Eagle, a monumental metal sculpture of about 33ft tall sitting at the entrance roundabout of the Akanu Ibiam International Airport was Dr Ikenegbu’s brainchild. Again, as a Project Director, Dr Ikenegbu had led the production of the FIFA/COCA-COLA Cup World Youth championship, as well as Nigeria’s ‘95 Life-Size Mascot Sculptures, two monumental concrete sculptures of kicking elephants.

In April this year, Dr Ikenegbu was inaugurated as a member of the Board of Trustees, Sculptors Association of Nigeria (ScAN), chaired by his imperial majesty, Ooni Adeyeye Enitan Ogunwusi, the Ooni of Ife. Currently, Dr Ikenegbu is the only representative of the South East in the association.

See What Brandon Bernard Said Before America Executed Him