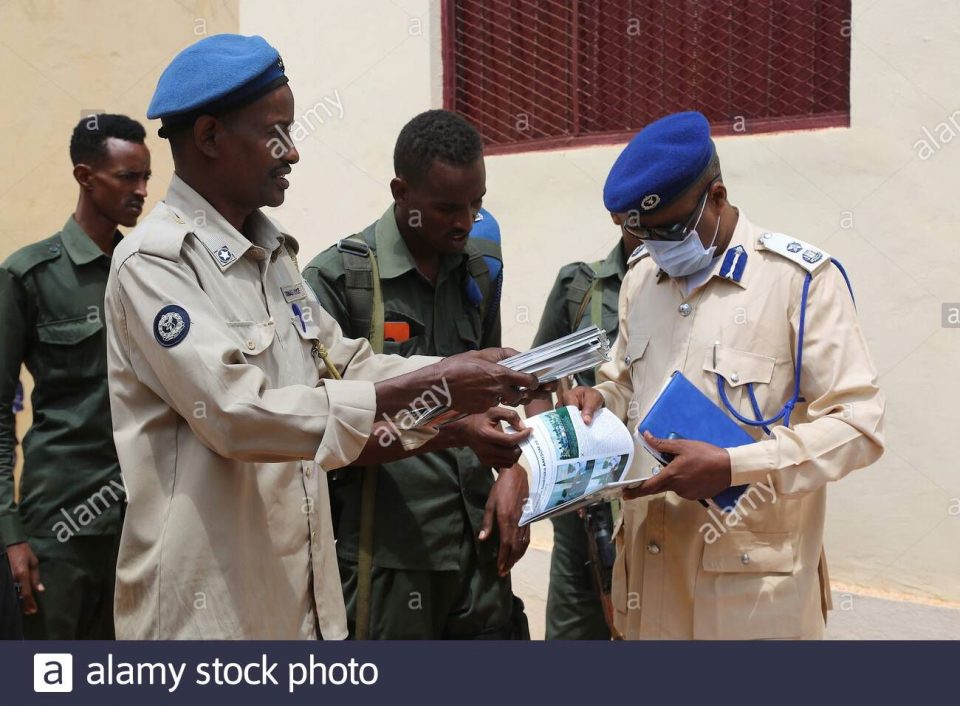 Bakiin Police Station in Baidoa on Monday, September 6, 2021, received a major boost to effective policing when the entire office switched to a solar power supply system that will provide interrupted electricity and enhance security in the area.

The police station, located seventeen (17) kilometres on the outskirts of Baidoa Town, was constructed last year by the African Union Mission in Somalia (AMISOM) with funding from the Danish government.

The 2.5-kilowatt solar system complete with 30 batteries, inverter and other accessories will provide a reliable power supply for the entire police station including office equipment.

“We are in the process of capacity building – both human and infrastructure. This solar system will enable officers of Bakiin Police to carry out their police duties effectively day and night,” said the AMISOM Police Reforms Restructuring and Development Strategic Management Advisor, Assistant Commissioner of Police (ACP) Ecotu Agapitus at the commissioning of the solar supply system.

AMISOM Civil Engineer, Andrew Alele, noted that the solar project had been specifically installed at the Bakiin Police Station due to its strategic location at the entrance of Baidoa town.

“This Police station will help to extend state authority. The solar supply system will guarantee and improve power supply around the clock. This is important to security and building confidence in the community,” Engineer Alele said.

At the commissioning was the Bay Regional Police Commander, Col. Amin Mohamed Osman, who thanked AMISOM for the timely gesture. He said the Police station had been struggling with an erratic electricity supply.

“Bakiin Police Station had no good access to electricity so this system will help us immensely. We are grateful to AMISOM for the support, and we request that they consider installing similar solar systems in other Police stations in Baidoa,” Col. Osman said.

The construction of the Police station and the subsequent installation of the solar power project by AMISOM is part of wider efforts to build the capacity of the Police in Somalia, to enable them to perform their duties to internationally comparable standards.