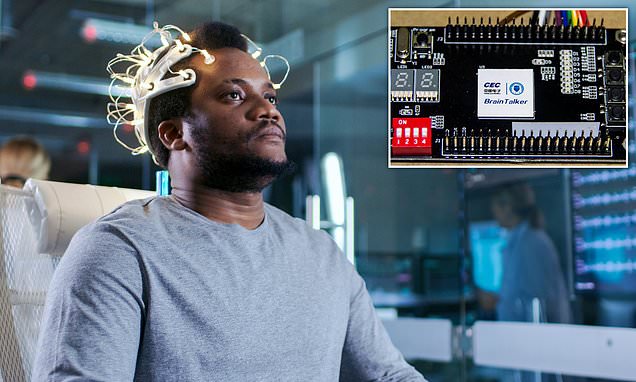 A Nigerian based in China, Martins Odunayo, has cried out for help, saying he started hearing strange voices courtesy of a brain chip inserted in his brain at a hospital.

According to a narration sent to SaharaReporters by Odunayo’s friend, the middle-aged man was involved in an accident in 2020 in China and sustained an injury on his forehead.

Odunayo said he had visited the hospital to get a stitch but the doctors allegedly implanted the Brain Talker Chip into his body, unknown to him.
He said five days after he got the stitches done, he started hearing some voices whose source he could not immediately ascertain.

After a while, he said he was able to recognise and the person at the other end asked him to travel back to Nigeria to meet with a Chinese man who he would travel with to the United States for a mission.
The Nigerian said he had to run to a police station in China to make a report but he was simply arrested.
He alleged that the police had stopped all efforts to reach the Nigerian consulate at Guangzhou.
He immediately called for the help of the Nigerian government to help him so he would not be used for terrorist activities against his will.
However, as of the time of filing this report, Odunayo’s friend told SaharaReporters that the young man had since been offline after dropping an SOS message for him.
Odunayo wrote, “Hello, they have come here now, they said they’re taking me to the hospital and that I must follow them though I don’t want to. City: Liuzhou, province: Guangxi; country: China.”
Odunayo had narrated: “My name is Martins Odunayo, I am from Ondo city in Ondo State, please, I am in danger here in China.
“Everything started last year when I had an accident and I had a cut on my forehead so I went to the hospital to get a stitch, unknown that a chip has been implanted in my body. Five days after I got the stitches done, I started hearing some voices but I did not know where the voice was coming from because at first I couldn’t recognise the voice.
”So I was confused and I told my friend about it and he said he did not know about anything like that. That was last year August till November when I started hearing a voice that I recognised so well’ then the guy came out straight to me that they wanted me to do something for them.
“So I told my boss about it and he said I should ignore them. Until this year February when the guy told me that he wants me to go to Nigeria to meet up with a Chinese guy who will help me make arrangements for an American visa that I should go with him to the United States for a mission.
”At that point, I became very scared and worried. I didn’t know what to do because he was threatening me with different things and I couldn’t figure out where the voice is coming from.
“So I decided to go to my friend’s apartment to sleepover that night,  that was on 8th of February, the next morning the guy started with the threat again that he is coming to my friend’s place to meet me.
“I was scared and I ran to the police station to make a report. But to my surprise immediately I told the police, they stopped asking me questions and they went away and came back after 15 minutes and said they had to make a phone call.
“After a while, some policemen came and took me to another station where I spent the night without any interrogation neither did they attend to my complaint, they took me straight to prison where I couldn’t contact anyone for a month.
“By March I was able to contact a friend and they helped me contact the Nigeria consulate in Guangzhou city and they told my friend that the police had contacted them.
“The chip guys kept threatening me with my family and my friends so I made up my mind to call the America embassy to tell them about it just in case those guys started using my identity, but immediately the prison official got to know about the phone call, they suspended me from making any phone call.
“They then told me they were working on my deportation even with the chip implanted in me. I couldn’t contact anyone since then until July 25th when they took me to the airport.”
“After I boarded the plane, the guy from the chip kept telling me to cool down that I would meet up with the guy in Lagos but I was so scared. So I immediately got out of the plane and requested the airport officials to allow me to talk to my embassy.
Inline Related Posts
“But it was already around 6:30 pm, the following morning which is 26th of July the policemen came and I told them I need to talk to my embassy and they said no.
“So they drove me back to my city and then said I have to be isolated for 28 days the next morning I called Nigeria consulate and I explained everything to them and they were so surprised because the police didn’t tell them anything, the police lied to them just to get me out of China with the chip implanted in me.
“Ever since then, I have been communicating with the Nigeria consulate officials until last week which they were supposed to come here to see me but then the police lied to them again that they had moved me out of here to the hospital just to disorganise their plan of coming over.
“Now the guys communicating with me via the chip are saying they are going to kill me if I insist on not going to Nigeria or try to expose this issue. The Liuzhou city police are also doing everything to cover this up, I have tried to contact the Federal Bureau of Investigation but I haven’t got any reply from them yet.
“Please, I am dying slowly and my life is in deep danger I want to come home but please, I cannot come with this chip in me.
“You can check on Google. The name of the chip is called Brain Talker Chip. It’s being manufactured here in China. Please, I need your help; I don’t want to be used for any terrorist activity.”
SaharaReporters.

National EOC Carries Out Review Of COVID-19 Response In Nigeria