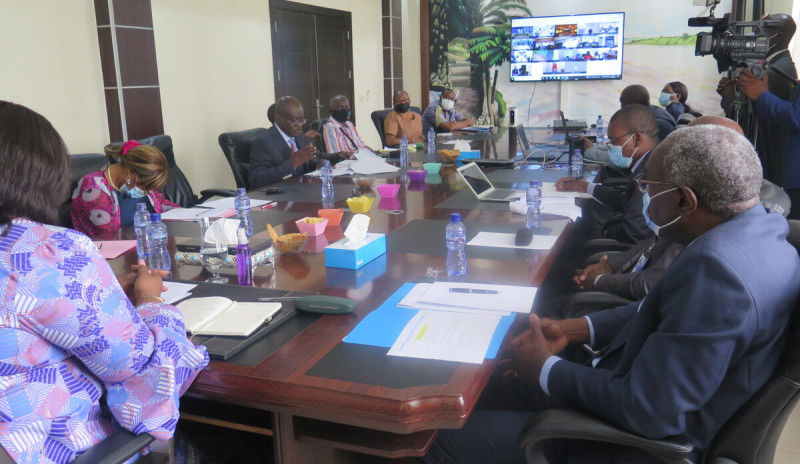 “Our prisons are in poor condition, overcrowded and faced with recurring food shortages.” Rose MUTOMBO, Congolese Minister of Justice, made this bitter observation during a consultation organized on September 30, 2021, at her Ministry facility in Kinshasa, when raising the issue of food support for detainees in DRC’s prisons.

The Deputy Special Representative of the UN Secretary-General in the DRC, Khassim Diagne, and the Deputy Prime Minister, Minister of the Interior, Daniel Asselo Okito, participated in this reflection.

As the administration of Congolese prisons is a matter with joint jurisdiction between the central and the provincial poweres, provincial governors also participated by videoconference.

According to the Minister of Justice, the Congolese government experiences serious difficulties every year in feeding and treating detainees who regularly face food shortages and health problems, and very few provinces are involved in providing them with care.

Rose Mutombo specifies that this situation affects practically all Congolese prisons, despite the efforts made by her team since assuming office as gthe Minister of Justice.

She mentioned in particular “increase in the number of subsidized prisons from 70 to 84; the establishment of a management commission for funds allocated to prisons offering more management transparency; the rehabilitation of Makala prison and penitentiary farms to improve the feeding of detainees, with support from MONUSCO and the UNDP, who continue to assist us in meeting the many challenges facing our prisons “.

Through its Correction Unit, MONUSCO supports the functioning of prisons in the DRC, notably providing food aid to combat malnutrition in penitentiary establishments.

According to Khassim Diagne, Deputy Special Representative, “around fifty deaths linked to malnutrition were recorded during the last quarter of 2019 in the 12 priority prisons of the DRC covered by MONUSCO”.

“If the situation remains as it is, the health and even humanitarian problems due to the malnutrition of detainees can generate security problems and compromise the efforts already made in terms of consolidating the rule of law in the DRC”, he explained.

Speaking in turn, the provincial governors deplored the inadequate resources at their disposal for the food and health care of detainees.

This is why the stakeholders found this consultation framework supported by MONUSCO useful to clarify the responsibilities in the administration of prisons between the central power and the provincial governors. They further wanted the levels of the contribution by the provincial and the central governments be clearly determined.

It should be noted that through several projects, MONUSCO has provided food aid to hundreds of detainees over the past two years. It also supported the national prison authorities in the creation of ” in Luzumu, Kongo central province ; in Kalemie, Tanganyika province, in Nyongera, North Kivu province and in many other DRC’s provinces.