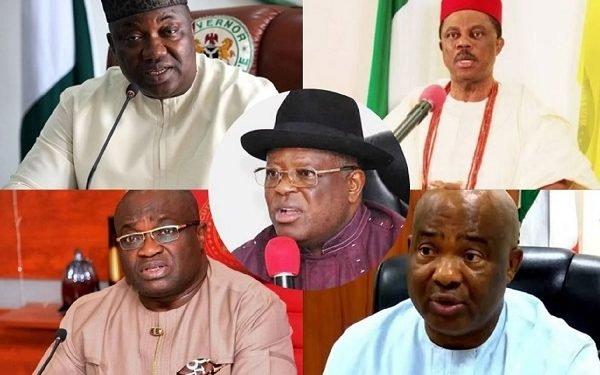 South-East Governors, Igbo political and religious leaders have vowed to ensure that the Indigenous People of Biafra, IPOB’s, suspended sit-at-home order will no longer be observed in the region and that people move about freely.

The leaders also said that they will engage the federal government for amicable settlement of all issues agitating the minds of Ndigbo, particularly their youths.

They further resolved that the southeast regional security outfit, Ebubeagu, will be launched in all states if the zone and pass enabling laws before the end of the year.

The Igbo leaders made the resolutions in a meeting of South-East Governors, south-east leaders, traditional rulers, National Assembly and the clergy in Enugu, on Tuesday.

However, neither Governor Willy Obiano of Anambra state nor his deputy, Nkem Okeke, was present at the security meeting despite the commotion in the state.

Anambra state has in the recent time been consistently unrepresented in official meetings such as Southern Governors’ meeting, South-East Governors Forum among other strategic meetings.

Igbo first lady, Iyom Bianca Ojukwu had in a message, she made public on Monday, pleaded with Governor Obiano to attend Tuesday’s meeting, but the Anambra Governor failed to be present.

Surprisingly, Governor Hope Uzodinma of Imo state who had for some time maintained absence was in the meetings, together with Governor Dave Umahi of Ebonyi state who were absent in the last southern Governors meeting in Enugu were both in attendance.

Governor Umahi who read the communique said that they condemned the killings in the southeast and have agreed to join hands with security agencies to stop the killings.

According to him: “The meeting condemned the sit-at-home orders, which are mostly issues by our people in the diaspora who do not feel the pains. In view of the information that even IPOB cancelled the sit-at-home, the meeting resolved that Governors and all people in the southeast do everything within the law to ensure that there are no further sit-at-home in the southeast and that people are allowed to freely move about in the zone.

“The meeting received a report on various matters affecting the south-east, especially on the issue of security and marginalisation of the south-east people, and resolved to study the reports for immediate implementation, and engagement with the federal government for amicable settlement of all issues agitating the minds of our people, especially the youths.

The meeting mandated the clergy, Ohanaeze Ndigbo and traditional rulers to continue to dialogue with Igbo youths.

The meeting observes a minute silence for all those who have lost their lives to the security challenges in the country, especially in the South-East zone.