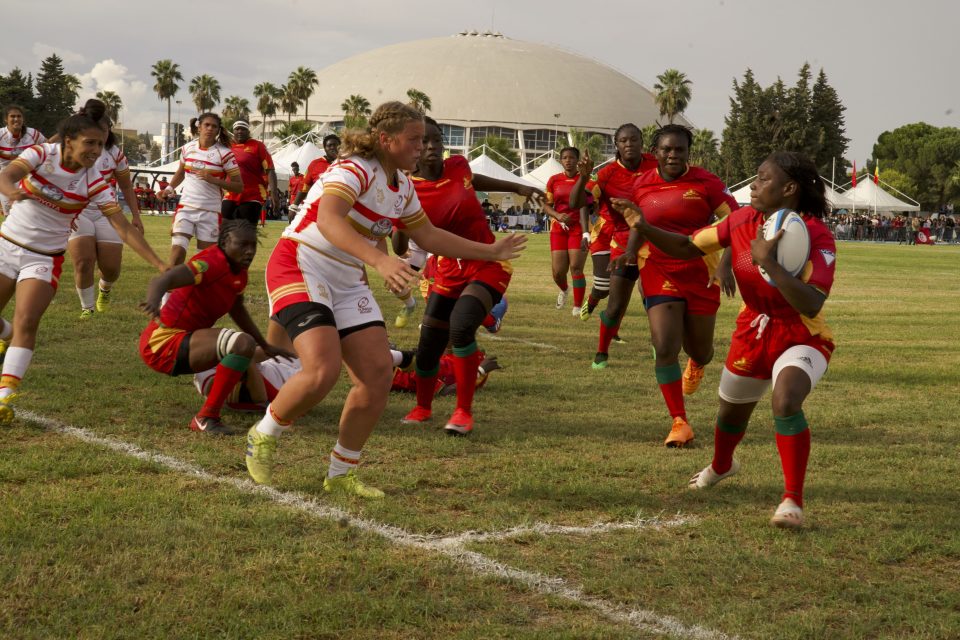 Tunisia got off to a flying start scoring a try within the first minutes of the game. The game was played beneath the iconic dome of El Menzeh’s sports complex in Tunisia’s capital city of Tunis on Saturday 9th of October.  A small but enthusiastic crowd cheered on the home team waving the red flags of Tunisia as the women’s team played a fast-paced opening against Senegal that resulted in an overall victory of 14-3 to Tunisia.

After scoring their first try Tunisia had to defend hard against Senegal’s series of powerful attacks. Tunisia defended well against Senegal who was like a moving wall lead by No. 8 Coumba Ndiaye who pushed forward with the sheer force of strength in an attempt to to take control of the game

Senegal’s No.5 Fatou Cissokho only to be felled by Tunisia’s No. 12 Lamia Mlawah as Cissokho charged towards the line. Despite their strength, Senegal Tunisia’s smaller but faster players laid waste to the opposition. Senegal suffered a number of injuries with Senegal’s Coumba Ndiaye forced to retire having sustained a shoulder injury.

The first half turned into a siege with Tunisia marking their goal in the face of Senegal’s determined attacks, ending in Tunisia’ maintaining their 5-0 lead.

It’s a good result, scoring so early, seemed to make a big impact on the Senegalese team psychologically

Tunisia’s team manager Abdelaziz Chaouachi said of the opening “it’s a good result, scoring so early, seemed to make a big impact on the Senegalese team psychologically.” He added both teams are equally strong physically but with different strengths, Senegal is stronger in the scrums and Tunisia play a more technical and faster game, which is a result of their strong showing in the women’s 7s which is a very fast game.”

The second half saw both sides play a much faster game, as both teams found a new confidence-boosting their energy.

Senegal continued their tactic of playing an attacking game to push through Tunisia’s defenders, but still, they could not counter Tunisia’s highly technical defence and fearless Lamia Mlawah, who brought down Senegal’s No. 4 the mighty Yvonne Mendy.

Tunisia’s secret weapon, No. 14 Emna Ben Arous, and her immense turns of speed brought the ball up the field close to Senegal’s line only to be turned back by a strengthened Senegalese defence.

The last twenty minutes saw Tunisia play a fast passing game, but injuries on both sides came thick and fast and the two teams settled their differences with a series of penalties one penalty kick was awarded to Senegal but Tunisia’s No.10 Ameni ben Salem who scored one try in the first half and three penalties overall that made her woman of the match.

Abdelaziz Chaouachi said that these games are important “because they will give the teams their world ranking so this will help Rugby Africa organize and structure the Africa Cup games.”