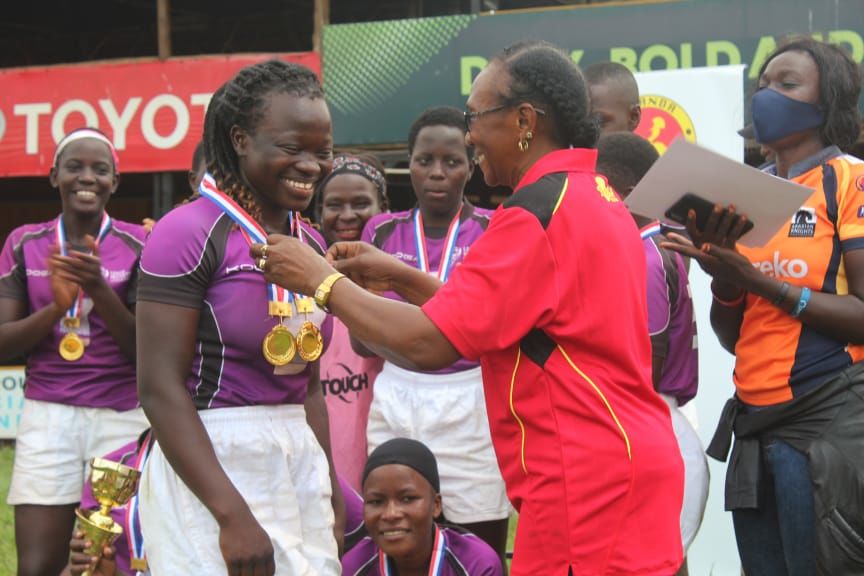 Junior Avengers on Saturday emerged victors of the Immy Mudoola Cup that was organized in honour of Immy Mudoola that played a big role in the development of women’s rugby in Uganda.

The Immy Mudoola Cup is an annual Girls development Cup that brings together girls of all age groups/women to play and celebrate the growth and development of women’s rugby. This year’s first edition featured the U20 women’s category only to serve as the launch.

The cup is in honour of Mrs Immy Mudoola for her excellent contribution to women’s rugby. (both senior women and junior teams) Mrs Mudoola also served on the former Uganda Women’s Rugby Association Executive Committee as Vice President in its inception and was behind the formation and growth of a couple of the women’s clubs/teams.  She hosted Thunderbirds for a fully funded camp in Iganga ahead of crucial fixtures like the Brown University game against Thunderbirds.

The Immy Mudoola Cup will also help age-grade female players prepare for a structured transition from young players growth through a smooth pathway preparing them for the national team and senior club competitions. This annual Cup was used as a tool to encourage senior players to engage with the age-grade/upcoming players and mentor them to be the best players.

‘’I was impressed by the tournament because it’s going to encourage many more young girls to join rugby. I liked it and I appreciate Uganda Rugby Union for the platform for young girls to display their talent.’’- Immy Mudoola

The first edition of the Immy Mudoola cup was a success as young girls displayed the great spirit of rugby. We registered 5 teams that took part in this tournament and we are positive that more teams will come on board. There is a need to recognize our U20 by giving them more game time. This will help retain, grow numbers and improve game quality among young girls.