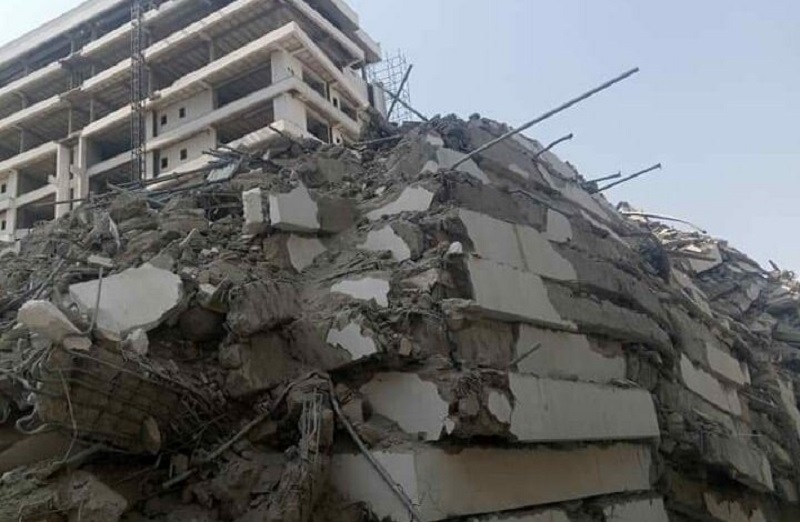 At the moment, the death toll arising from the collapse of the 21-storey building that collapsed on Monday on Gerard Road, Ikoyi, Lagos is ten persons and still counting as evacuation continues.

As of the time of filing this report, many people were still trapped in the rubble, including the Managing Director, Fourscore Heights Limited, Mr Femi Osibona, who owned the building, and some of his clients and engineers.

PUNCH Metro gathered that the building crumbled around 2 pm when workers were on the site.

One of the workers who survived the incident, Gabriel Bassey, told one of our correspondents that about 50 persons were still trapped in the rubble.

He said, “This project, 360 Degree, was built by Fourscore Homes Limited. I was trying to plug my phone and not up to five seconds that I left the spot, I saw the building coming down and I ran to safety. We have a lot of people trapped in the rubble, who we need to bring out.

A resident, Morris Ashiobi, said the building did not show any sign before it caved in.

He said, “When the incident happened, I was the first person to climb the building to the last floor and I saw corpses. I started calling people to come and rescue others. We recovered six dead bodies, rescued one, while the rest are still under the rubble.

“The building didn’t give any sign, it just came down. We were still working on it. It took an hour before the emergency agencies came and we had brought out the dead bodies and rescued one person before they came. If I’m not mistaken, about 40 persons were on site, because we were working at the time. Some people came from Abuja today (Monday) to work. I have many friends still trapped in the building.

“When the police came, they chased us out and didn’t allow us to rescue anyone again; if they had allowed us, we would still have rescued more people.”

An eyewitness, Blessing Feyijimi, who lamented the lack of equipment by the first responders, stated that more people would have been rescued if they were better equipped.

He said, “When the incident happened around 1.36 pm, we started rescuing people but the security men locked the gate and didn’t allow people to enter. We protested and forced our way in. We recovered four dead bodies on the last floor and rescued four injured persons, but some people are still trapped in the rubble.”

The Lagos State Commissioner of Police, Hakeem Odumosu, confirmed the death of five persons, adding that three others were rescued.

However, the South-West Coordinator of the National Emergency Management Agency, Ibrahim Farinloye, said four corpses were recovered from the building, adding that four were rescued.

Our correspondents reported that some relatives of the victims present at the scene were crying and refused to talk to reporters.

The Lagos State Government, while reacting to the incident, called for calm among the residents.

The state Commissioner for Information and Strategy, Gbenga Omotosho, in a statement, said rescue agencies were on the ground to save those under the rubble.

He added that Governor Babajide Sanwo-Olu had ordered an investigation into the incident, adding that a report of the probe would be made public.

The state Ministry of Physical Planning and Urban Development, in a statement on Monday, said investigations had commenced unravelling the cause of the collapse.

The statement added that the general managers of the Lagos State Building Control Agency and the Lagos State Physical Planning Permit Authority were on the ground to make a summary assessment on the extent of damage to the surrounding structures if any.

The state Deputy Governor, Obafemi Hamzat, said it was important to cordon off the scene of the incident to facilitate the efforts of professional rescuers and limit casualties.

The Co-ordinator, Building Collapse Prevention Guild, Ikoyi-Obalende Cell, Bola Arilesere, said in an interview with one of our correspondents, “No building of that scale under construction should collapse unless it was pulled down or some explosives were planted to destroy it. So, something went wrong technically.

“It is likely that some people deliberately tried to cover it up. We only had the structure in place; it suggests a sub-structural failure. We need to dig deep.”

The President of, Nigerian Institute of Building, Prof. Yohana Izam, expressed sadness at the incident and the “monumental loss of material resources and human fatalities.”

“There should be a thorough investigation to test the implementation of physical planning and development laws in Lagos and ensure that culprits are heavily sanctioned,” he stated.

Meanwhile, the company that designed the structure and supervised the construction, Prowess Engineering Limited, said it withdrew from the project in 2020 because it no longer shared the same vision with the owners, Fourscore Heights Limited.

The Managing Director, Prowess Engineering Limited, Muritala Olawale, in a letter to Osibona on February 20, 2020, said his firm could not guarantee the integrity of the building from anything above the fourth floor.

Olawale, who handled two other building projects for Osibona, said his company was withdrawing from the third one because “of how the project is being executed.”

“We can guarantee the integrity of the first two buildings and also the work done up to the fourth floor of the third building supervised by us provided specifications have been met in terms of the required concrete strength. This we do not have control over as we do not have the concrete cube test results of each stage of the building to date. Also, note that we are not taking responsibility for any other construction errors that may have occurred overtime on the project,” the letter read in part.

Olawale confirmed the authenticity of the letter to PUNCH Metro on Monday.