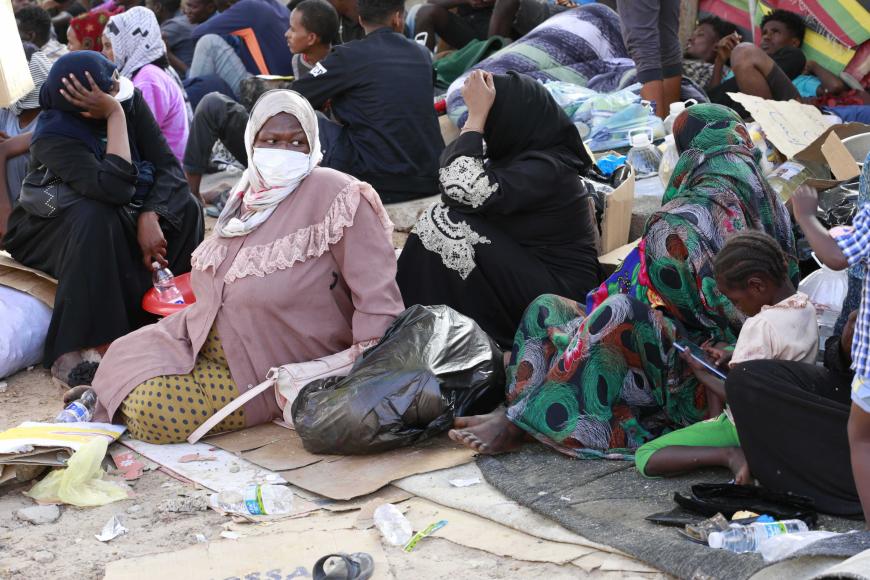 Thousands of migrants and asylum seekers gathered around the Community Day Centre (CDC) after armed groups linked to the Interior Ministry conducted widespread raids and makeshift shelter demolitions in Tripoli’s Hai al-Andalous municipality. They were purportedly targeting criminal networks but left thousands homeless. Those who remain outside the CDC, where the UN refugee agency, UNHCR, previously provided medical assistance and other services, are peacefully demanding evacuation from Libya to a safe location amid worsening humanitarian conditions and attacks by armed groups.

“By demolishing migrants’ and asylum seekers’ makeshift shelters, Libyan authorities manufactured a humanitarian crisis, leaving thousands of people fending for themselves in the streets,” said Hanan Salah, Libya director at Human Rights Watch. “Libya and European states should urgently respond to this rapidly deteriorating situation as people are being exposed to violence and lack basic any help for basic needs.”

Armed groups and police units linked with the Interior Ministry of the Government of National Unity (GNU) raided Tripoli neighbourhoods around the Gergaresh area, where many African migrants and asylum seekers lived, on October 1 and the following days, purportedly to disrupt illicit drug networks. The groups arrested at least 5,000 people, including women and children and UNHCR-registered asylum seekers and refugees, and transferred them to migrant detention centres.

During the raids, the armed groups killed one person and wounded at least 15 others, according to UNHCR. Armed groups arbitrarily arrested and detained people without individual verification of immigration or asylum status.

A registered asylum seeker from South Sudan who was in his dwelling during early morning raids on October 1 said multiple armed groups and Interior Ministry units surrounded the neighbourhood with armoured vehicles and light and heavy weapons. The shooting lasted from around 1 a.m. to 8 a.m., he said: “I could hear many women and children crying. I saw horrific destruction. I managed to sneak out with others and spent the whole day and night in perpetual fear while starving and thirsty. We were too afraid to ask anybody for help, so some even drank from the sea.”

Of those arrested on October 1, the authorities transferred over 4,000 people including women and children to a migrant prison known as Al-Mabani in Ghot al-Shaal, while the rest were transferred to other migrant prisons in Tripoli. Several detainees who were at Al-Mabani said that inhumane conditions there, such as severe overcrowding, lack of sufficient food and medical care, and ill-treatment resulted in riots and a mass prison break on October 8.

Former detainees described severe beatings with wooden sticks and alleged that one detainee died on October 5 after a guard struck him on the head with a metal object. During the breakout, guards shot and killed at least six detainees and injured scores of others, according to the International Organization for Migration.

Those in the streets in front of the CDC described harrowing living conditions. Since the UNHCR closed the centre on October 4 citing security concerns for staff due to the large crowds encamped there, they had not received any cash or in-kind assistance from any international organization or the Libyan government. They said some private citizens donated some food. They said they had no access to toilets and no shelter from the rain and very little means to buy food.

People camping on the streets are also exposed to attacks by armed groups as well as traffic accidents. In one incident on October 27 a car hit a 17-year old Eritrean boy who subsequently died, UNHCR confirmed.

On October 12, armed men apparently from a local militia that controls the area known as Fursan Janzour, beat and twice shot Sudanese asylum seeker Amer Abker in front of CDC while trying to arrest him, several refugees said. He died the next day.

A registered asylum seeker from Sudan said he had walked for an hour to reach an acquaintance so he could wash and use a toilet. “Even mosques have now shut their doors to us, refugees,” he said. “I am afraid to move around as I could be attacked. We are afraid, no one can protect us.”

UNHCR should urgently explore all avenues for ensuring that the basic needs of people currently outside of the CDC are met, and take steps to identify people with protection needs, Human Rights Watch said. UNHCR should also move quickly to reopen the centre safely, including providing accommodation to the most vulnerable among those sleeping in the streets.

Prime Minister Abdelhamid Dabeiba, in a statement after the raids on October 1, called the Interior Ministry officers “heroes.” Without providing any evidence, he said that they had carried out “a planned security operation, to eliminate the largest drug manufacturing and distributing dens in the Gergaresh area,” and he vowed to pursue criminals “in all regions of Libya.”

UNHCR said it had identified over 1000 people who would be prioritized for humanitarian evacuations – suspended since August – once Tripoli authorities give the green light to restart them.

Libya’s General Prosecutor should urgently conduct a transparent investigation into alleged deaths of asylum seekers and migrants due to the security operations and prison break in early October, Human Rights Watch said.

Human Rights Watch has documented systematic and widespread abuses committed with impunity against migrants, asylum seekers, and refugees in Libya over the years by prison guards, armed groups linked with Libyan authorities, and traffickers and smugglers. Between January and September, Libyan authorities intercepted more than 27,551 people at sea and forced them back to Libya, where they face inhumane detention conditions, sexual violence, torture, forced labour, extortion, and death.

EU policies to contain migrants and asylum seekers in Libya through supporting Libyan authorities, and clear evidence of this support contributing to ongoing abuses despite mitigating efforts, make the EU complicit in these abuses. The EU has a special responsibility to ensure evacuations, of refugees, asylum seekers, and migrants at risk in Libya, including directly to EU countries

EU member states should condition cooperation with Libyan authorities on migration on the prompt release of all refugees, asylum seekers, and migrants being arbitrarily detained; formal recognition of UNHCR and allowing it the full exercise of its mandate; the signature and ratification of the 1951 Refugee Convention; and establishment of national programs for independent, impartial, and transparent monitoring of human rights violations against migrants, asylum seekers, and refugees in Libya.

“The international community including UNHCR needs to step up aid efforts to help those in dire need, and Libyan authorities need to end the deadlock and urgently ensure restart of humanitarian evacuations,” Salah said. “Refugees, asylum seekers, and migrants lacking shelter should be offered temporary safe solutions and viable alternatives to detention.”