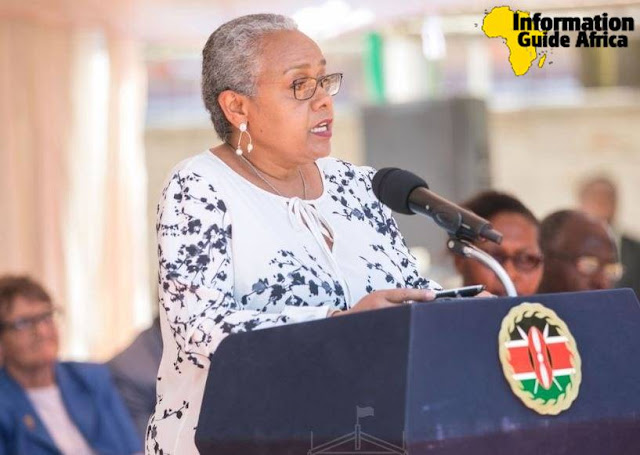 The First Lady received the baton from Mr Paul Tergat of the National Olympic Committee of Kenya (NOC-K) and handed it over to Kenyan rugby great Humphrey Kayange for onward delivery to Uganda.

“As Kenyans, we are honoured to host and welcome the Queens Baton Relay that arrived in the country on Tuesday, 2nd November.

“As part of a long-held tradition, this is a unique ceremony. The Baton carries a message from her Majesty the Queen for all Commonwealth members to be unveiled at the opening of the games next July,” she said.

First Lady Margaret Kenyatta expressed optimism that the 2022 Commonwealth Games in Birmingham will offer Kenya an opportunity to showcase her sporting prowess.

“These games will present another opportunity for our country to showcase our sportsmen and women. The different events will provide great inspiration for them to achieve their dreams,” she said.

The First Lady said the ‘sustainability, youth, inclusion and culture’ theme of the baton relay highlights the diversity of the competition.

Further, the First Lady noted that the theme espouses the spirit of friendly rivalry and enhances strong bonds of friendship reminding Kenyans of their individual and collective responsibility to promote inclusion.

“Over the past two days, the relay teams, with cheer and celebration, have hosted the Baton at special sites in Nairobi through festivals depicting sports and culture.

“The baton bearers are children and youth, embracing all persons including those who are differently-abled. This demonstrates our commitment towards the spirit and theme of the Commonwealth Games,” the First Lady said.

Recalling that in August, Kenya successfully hosted the World Athletics U20 Championships that brought together over 100 nations, the First Lady pointed out that the games served as a platform to encourage and inspire the youth towards sporting excellence.

Sports CS Amb Amina Mohamed said the arrival of the Queen’s Baton in Kenya meant the Commonwealth Games are around the corner and disclosed that the strong Kenyan team that won the World Athletics U20 Championships will represent the country at the at Birmingham games.

“We are going to send this Baton with a lot of support but also with a lot of anticipation. We expect the Kenyan team to bring back the largest number of medals,” the Sports CS said.

Other speakers at the event included Mr Paul Tergat and Julius Court, the Deputy British High Commissioner to Kenya.