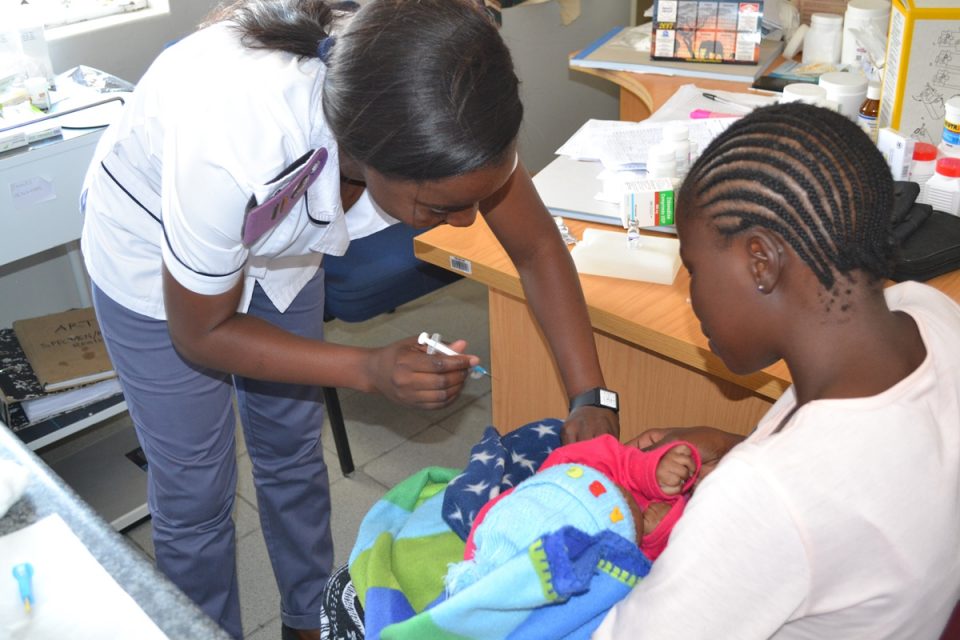 Namibia has 414 disease Surveillance Sites and of these 66 are categorized as high priority sites requiring weekly visits, 83 are medium, requiring bi-monthly visits and 265 are classified as a low priority requiring a monthly visit

Namibia was certified polio-free since October 2008 and had continued routine and national immunization campaigns to maintain its polio-free status. However, the country remains at high risk for vaccine-derived polioviruses due to low detection of Acute Flaccid Paralysis cases in the bordering regions which is used as an indicator to measure how sensitive the surveillance system is. In addition, there is a high number of un and under-vaccinated children along the Namibian- Angolan and Namibia-Zambia border with 5 densely populated regions bordering these two countries.  Both Angola and Zambia had reported confirmed cases of Vaccine Derived Polio Virus type 2 in 2019 and implemented campaigns with monovalent oral polio vaccine type 2.  As a result, the WHO Namibia in collaboration with MoHSS has intensified polio surveillance along these borders and other health districts that are considered high risk such as Windhoek, Okahandja, Otjiwarongo, Tsumeb, Oshakati and Onandjokwe districts.

Since 2019,  2 STOP Polio Consultants have been supporting Polio surveillance and data management.

In 2021, 5 more Polio consultants that including Rapid Response teams and local STOP consultants have been recruited by WHO to further strengthen routine immunization, acute flaccid paralysis (AFP) surveillance and data management and analysis of reported cases. To increase the sensitivity of surveillance, WHO supported the Ministry of Health and Social Services in partnership with town councils in establishing environmental surveillance.  Four sites namely Windhoek , Oshakati, Engela and Rundu were identified. Samples are collected on a weekly basis from sewerage ponds and sent for testing to determine if there are any vaccine-derived polioviruses circulating. Overall support is also provided with the investigation of AFP cases, strengthening collaboration with national laboratories for validation and processing of specimens, reviewing health facility records for possible AFP cases, strengthening data management and training MoHSS for skills and knowledge transfer.

Based on the s surveillance data, the country has maintained its status of being polio-free with no wild poliovirus detected since 2008. Routine vaccination against polio remains relatively high with a national average of 87 % and 82% for OPV 3 and IPV in 2020 respectively. It is therefore of paramount importance that the gains made are sustained in 2021. To this extent, WHO will provide technical and financial support to 6 high priority districts to ensure that they meet their annual 2021 targets.

Namibia participated in the recently concluded Inter-Country Certification Committee meeting (ICCC) and noted the impact of COVID-19 on the delivery of essential health services including routine immunization services.  Limited resources to sustain outreach services, lack of integrating routine immunization into COVID-19 vaccination campaigns as well as the re-purposing of an already limited health workforce to the COVID-19 response were listed as key challenges that may have impacted polio surveillance activities.  The meeting however noted the efforts of the government to address staff shortage through the recently launched initiative to recruit an additional health workforce.

WHO together with other UN agencies and partners remains committed to ensuring that Namibia meets all four objectives of the Global Polio End-Game Strategy.

Namibia Tasked To Strengthen Its Core Capacities For Health Security