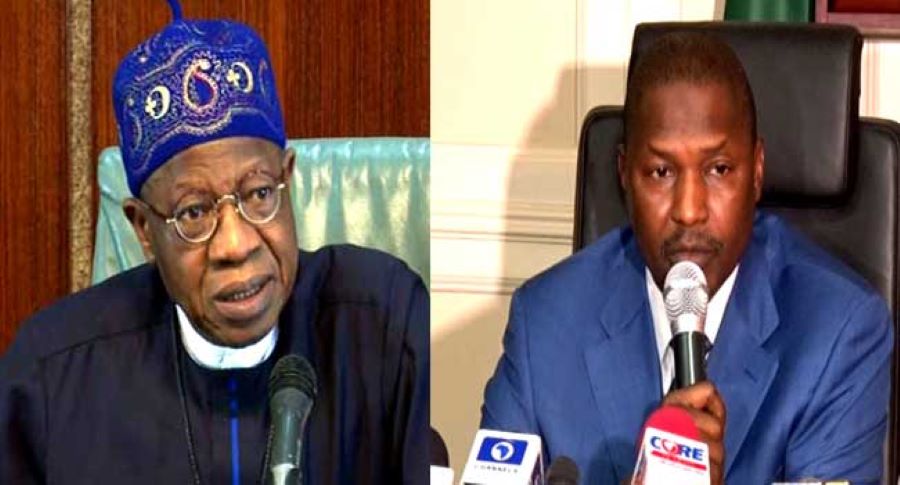 Femi Falana (SAN), Nigeria foremost human rights defender has stated reasons the Attorney General of Federation and Minister of Justice, Abubakar Malami (SAN) and Nigeria Minister of Information and Culture, Lai Mohammed must be sanctioned over the killings of innocent EndSARS protesters at the Lekki tollgate October 20, 2020.

According to Falana, the above President Buhari’s minister attempted to cover up the shootings of the protesters at the Lekki toll gate.

Falana who described the killing of the youths as crimes against humanity said Malami and Mohammed must be sanctioned for complicity in trying to cover the perpetrators of the crimes during the EndSARS protests.

Recall that following the shootings and the reported killings at the Lekki toll gate, the Lagos State Government had constituted the Lagos State Judicial Panel of Inquiry on Restitution for Victims of SARS Related Abuses and other matters to, amongst other things, probe the Lekki incident.

On Monday, after about a year, the Justice Doris Okuwobi-led panel submitted its report to the Lagos State Government, noting that at least nine persons were confirmed dead at the Lekki toll plaza when soldiers stormed the tollgate to disperse EndSARS protesters on October 20, 2020.

The 309-page report stated, “The atrocious maiming and killing of unarmed, helpless and unresisting protesters while sitting on the floor and waving their Nigerian flags and while singing the National Anthem can be equated to a massacre in context.”

It recommended that all army officers deployed in the Lekki tollgate should be made to face appropriate disciplinary action, stripped of their ranks and dismissed as they were not fit and proper to serve in any public or security service of the nation.

The United States, the United Nations, the United Kingdom and Amnesty International have since called on the Nigerian authorities to ensure that the panel’s report is handled transparently.

Lagos State Governor, Babajide Sanwo-Olu, who received the report on Monday, constituted a Committee to bring forward a White Paper within the next two weeks to be considered by the Lagos State Executive Council.

Minister of Information, Lai Mohammed, had at various times maintained that the Lekki incident was a “massacre without bodies” and had threatened to sue Cable News Network and other international bodies that claimed otherwise.

Malami had also said those who attacked the youths at Lekki toll gate weren’t soldiers but wore military camouflages while the LCC had allegedly removed the closed-circuit television at the toll gate in a move that had been widely described as a cover-up.

However, speaking on Thursday, Falana who spoke on Channels Television’s ‘Sunrise Daily’ programme said those who released the Lekki panel report feared cover-up by the government, hence, they released the report to the public to know their findings.

Falana said the report is one of the best so far in the country, added that there is no room for a cover-up.

The human rights lawyer noted that Mohammed, Malami, the LCC and all those who tried to cover up the killings at Lekki must be sanctioned.

When asked whether the President, Major General Muhammadu Buhari (retd.), should speak on the report of the panel, Falana said, “No, not yet; the President made a broadcast last year in 2020 based on the information given to him. I’m sure you are aware that five times, the Minister of Information, Alhaji Lai Mohammed has said nobody was killed. The Attorney General of the Federation, Mr Abubakar Malami (SAN), said those who appeared in Lekki were not Nigerian soldiers but people just put on military uniforms to perpetrate atrocities.

“And the panel found that even LAWMA (Lagos State Waste Management Authority) went there to do a clean-up in the night, in the early hours of 21st (of October 2020) so that there would be no trail but by the time the panel visited the scene of the incident they were still able to pick some expired bullets.”

“The panel painstakingly analysed the evidence of every witness before arriving at the conclusion. So, it is difficult to cover up what happened on that day,” he added.

On what should happen to the federal officers who allegedly tried to cover up, the senior advocate said, “They are all going to be sanctioned. Anybody who attempted to cover up would be sanctioned, any of them including those who managed Lekki, the LCC, because they disabled their system in order to cover up.”

“Any regime in the world that says these are federal officers and we are not going to sanction them, if you don’t, these are materials for the ICC (International Criminal Court). Under the Rome Statute, the ICC will only intervene if a government is unwilling or unable to prosecute those who engaged in crimes against humanity, genocide and aggression. If by the time the (Lagos State) government issues its White Paper, recommendations are made and these people are not prosecuted, that is not the end of the matter. No President can behave as in the ‘80s, that this is an internal affair.”