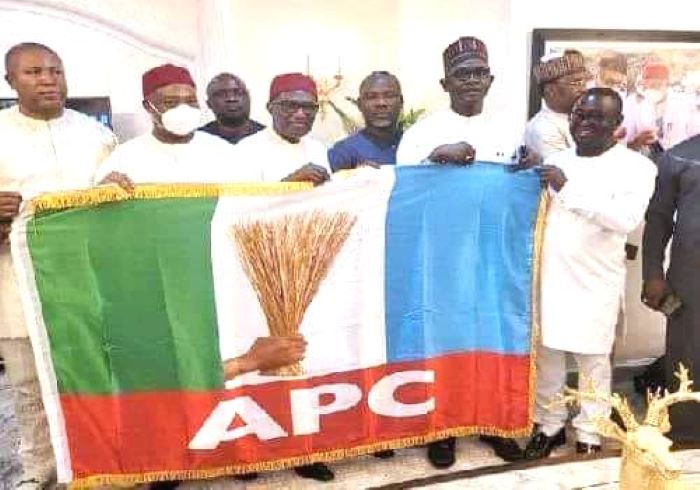 The All Progressives Congress (APC) governors have slated tomorrow Sunday, January 9, to meet and decide a substantive date for the party’s national convention.

This is partly in response to the caution issued by President Muhammadu Buhari in an interview with the Nigerian Television Authority, which aired on Thursday.

In the interview, Buhari warned that by dilly-dallying, the APC might be setting itself up for defeat by the opposition Peoples Democratic Party in the 2023 presidential election.

The Chairman of the Northern Governors Forum and governor of Plateau State, Simon Lalong, met with the President at the Aso Rock Villa, Abuja, on Friday.

Speaking with State House Correspondents, Lalong noted that deliberations at the Sunday meeting would centre on picking a date for the party’s convention.

This was a governor, who spoke to Saturday PUNCH on condition of anonymity on Friday. He said the APC governors would insist that the national convention holds before the presidential primary.

The governor said, “Some people like OUK (Orji Uzor Kalu) are pushing for the conduct of the presidential primary before the convention. That is not possible. The caretaker committee chairman of the party, who is also a governor, needs to return to his state and pay attention to governance.

“The idea of the caretaker committee is just for the members to oversee the party for just six months. Now, we are almost having them as an alternative to the party’s National Working Committee. That will not work. We want to put the convention behind us.

“Look at the PDP, they have held their convention and have moved on. We need not pay too much attention to distractions. The convention should hold so that we can face other issues in the party.”

Lalong, on his part, described Buhari’s caution as a wake-up call on the party to have a seamless convention to avoid disintegration.

Lalong said the APC governors had assured Buhari that the convention would hold in February.

Lalong said, “I agree that all the times there are meetings, especially taking final decisions on the party; I’m always part of it and part of it was also why I visited the President and the President still stands committed that there must be an immediate convention.

“You know, when a convention is coming, there are fears here and there; some people will tell you it will work, some will say it will not work. I don’t want to jump to conclusions, but the visit to the President has already assured us and you know that there is already a notice that all the governors are meeting on Sunday. By Sunday we will tell you when we’re having the convention.

Lalong explained that despite the concerns the President raised, the governors were determined to ensure that nothing stops the convention.

He said, “Some parties have held their own – the PDP did their own, nothing will stop APC from holding their own.

“So, all the fears that we’re talking about, which the President also re-echoed, are also telling the governors to please do more and keep the party alive. So, by God’s grace, we’re going to put our party alive.”

Lalong stressed that efforts were being made to lay all intra-party differences to rest.

“I just want to assure you that in so many ways, when we meet, we’ll harmonise all interests and we’ll come out as one APC and that’s what we’re hoping for.”

On whether the APC could influence the withdrawal of ongoing court cases against the convention, Lalong said, “There are procedures for holding court processes. Many of the court processes were there when we set up the caretaker committee, but up to this moment, if you go to take a census of some of the court proceedings, you will realise that a lot of them have been resolved out of court. So, it’s still the duty of the party. It’s still part of the functions of the party to resolve differences.

“I had a court process in my state, that did not stop me from going on and at the end of the day, we resolved the court process and we’re still going on, preparing and waiting for the convention.”

On whether the APC can meet the speculated February 5 date for the convention in view of the need for a mandatory 21-day notice to the Independent National Electoral Commission, Lalong stated, “Well, I’m not the chairman of the convention committee, but I want to assure you that we’ve called a meeting for Sunday and if there is a meeting on Sunday, and you’re thinking about next Friday, Just wait and see what will happen before next Friday. I don’t want to draw conclusions now.”

Meanwhile, the APC internal crisis over the convention may have worsened as some members have dragged the Mai Mala Buni-led Caretaker and Extraordinary Convention Planning Committee before the Federal High Court in Abuja.

The applicants are seeking an order of the court to restrain the Buni-led CECPC from going ahead with the convention.

Already, the Progressives Governors Forum of the APC has scheduled a meeting for this weekend in Abuja at the Kebbi State Governors Lodge in Asokoro.

The chairman of PGF and Kebbi State Governor, Atiku Bagudu, said top on the agenda of the meeting was the national convention.

The APC, Chairman of APC Caretaker/Extraordinary Convention Planning Committee and the Independent National Electoral Commission were listed as the first to third defendants in the suit.

The plaintiffs, in their suit marked FHC/ABJ/CS/3/2022, are praying the court to make an order stopping the convention on the grounds that APC state congresses have yet to be completed in all the 36 states of the federation. No date has been fixed for the hearing of the case.

Cooking Gas Increases By 240% Within Ten Months As HURIWA Reacts