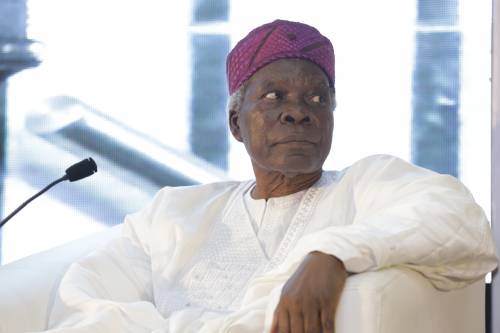 Leader of the Pan Yoruba socio-political organisation, Afenifere, Professor Ayo Adebanjo, has said that former President Olusegun Obasanjo goofed for declaring that the resources in the Niger Delta belonged to Nigeria.

Adebanjo insists that the oil in the Niger Delta does not belong to Nigeria.

He backed the leader of the Pan Niger Delta Forum (PANDEF), Chief Edwin Clark, who had engaged in a war of words with Obasanjo over the latter’s declaration that the resources in the Niger Delta belonged to Nigeria.

Clark had in a letter titled, “Outburst Against the People of Niger Delta Region” accused Obasanjo of showing hatred for the people of Niger Delta when he spoke at a peace and security meeting convened by the Global Peace Foundation and Vision Africa recently in Abuja.

The former president, in his reply, insisted that it was wrong and unconstitutional for Clark or the people of the Niger Delta region to lay claim to crude oil or any mineral resources found in the area.

The Afenifere leader recalled that there was peaceful co-existence among ethnic groups in Nigeria until 1966 when the military took over the government and “abrogated the constitution agreed to by our founding fathers and set up the present 1999 Constitution.”

He appealed to Obasanjo to join hands with the other patriots to ensure President Muhammadu Buhari restructure the country.