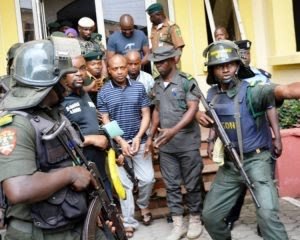 An Ikeja High Court, Lagos, has sentenced Chukwudimeme Onwuamadike (alias Evans) and two of his accomplices – Uche Amadi, and Okwuchukwu Nwachukwu, to life imprisonment for criminal conspiracy and kidnapping.

In his ruling, Justice Hakeem Oshodi, said, “none of the three convicts showed any remorse to the crimes but tried to lie their way out.

“The law is the law and must be upheld. The maximum sentence for the crime of kidnapping in Lagos state is life imprisonment, and the court has no powers to exercise its discretion in this regard,” the judge remarked.

The judge also acknowledged the “harrowing experience” of the victim, Donatus Duru, who spent 88 days in captivity, was shackled and blindfolded, until he was able to escape.