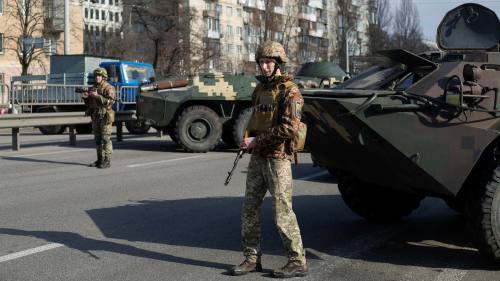 As the Russian juggernaut that was supposed to crush Ukraine in an effortless march of triumph sputters amid fierce resistance, anecdotal and sometimes unverified reports are emerging that Russia’s invaders are not living up to their billing.

The Land Forces of the Ukrainian Armed Forces said Friday that Russian troops stopped in Konotop, a city on their route to Kyiv, due to fuel and supply issues, Reuters reported.

That led to one video, which could be verified, of a Ukrainian citizen offering to tow a tank back to Russia and a tweet that showed what happened to Russian soldiers making a similar request near the city of Kharkiv.

A priceless exchange of a brave Ukrainian citizen with Russian army stuck out of fuel. ENGLISH SUBTITLES.

[Thanks to my Ukrainian friend for transcription and translation] pic.twitter.com/Rar3WRXEwD

“These two Russian idiots in Shevchenkove, Kharkiv oblast, had their vehicle sputtered out. Guess what they did? They came to a local Ukrainian police station. And asked if they could have some fuel,” the tweet showing an image of the soldiers read.

These two Russian idiots in Shevchenkove, Kharkiv oblast, had their vehicle sputtered out.
Guess what they did?
They came to a local Ukrainian police station.
And asked if they could have some fuel. pic.twitter.com/HmaUNORQL3

Estonia’s former chief of defense, Riho Terras, noted that the images contrast with preconceptions about Russia’s military might, according to the Independent.

Does this look like a force that is prepared to fight an extended conflict?” he asked.

“They have no fuel, no motivation, they do not even know where they are supposed to go. A surreal exchange to be honest, but it shows how unprepared these first waves of Russian invasion have been,” he said.

Scott Gehlbach, a University of Chicago political economist, said there was “lots of evidence that Russia botched the logistics of its military operation.”

He said the video of the tank running out of gas “illustrates another problem for Putin: a failure to prepare Russia’s population, including its soldiers, for war.”

“Russia may be able to compensate for an absence of fighting spirit through sheer numbers. But the lack of preparation — logistical and ideological — will imply greater casualties, military and civilian,” he said.

Related: Ukrainian Ambassador to UN Reveals Alleged Last Words of a Russian Soldier to His Mother
Some say the tank ran out of gas.
Regardless
These 2 groups of humans showing courage and restraint.
The people of #Ukraine and #Russia may just end this war. https://t.co/n9j0soVIrl

The Russian invasion has brought Ukrainian citizens out to repel the invaders or die trying, according to The New York Times.

“When I heard the explosions I decided that I am ready,” said Olena Sokolan, a business manager who now totes a rifle as she tried to protect her piece of Kyiv.

“I am adult woman, I am healthy and it’s my responsibility.”

“Everybody in our country needs to defend — women, girls, everybody,” said Denis Matash, a nightclub manager.

Ihor Zhaloba, a professor of history at Kyiv University, came out to enlist in the units protecting Kyiv.

“My wife worried; I worried; everybody is worried,” he said. “But nobody told me not to do this, not my wife, not my daughters. They all think I should be here.”

Senior Advocates of Nigeria Say No To CJN Immunity

You Kill Our Member In Protest, Shiite Members Accuse Police