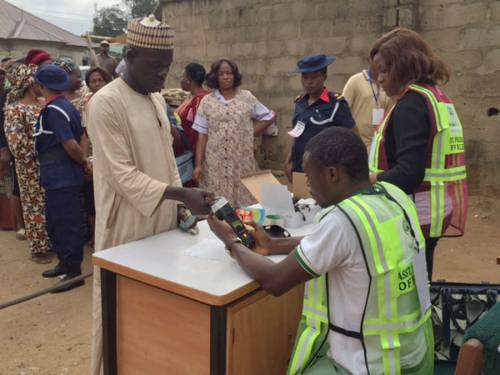 One Israel Akanji, said to be an officer of the Independent National Electoral Commission (INEC), has been accused of fraternising with members of the All Progressives Congress (APC) in the bid to work in the party’s favour in the forthcoming elections.
A petition written by Honourable Sunday Olaifa, Chairman of the Peoples Democratic Party (PDP) in Oshodi/Isolo Local Government Area (LGA), and sent to SaharaReporters, accused Akanji, the electoral officer said to have been posted to the area, of “being partisan and moving the machinery of INEC in favour of members of the APC in Oshodi/Isolo LGA”.
According to Olaifa, Akanji met with Honourable Akeem Olushola Shokunle, a member of the Lagos State House of Assembly representing Oshodi/Isolo Constituency I, under APC; Dr. Bashiru Dawodu, the APC Federal House of Representatives member representing Oshodi/Isolo Constituency I, and Honourable Muse Ariyo.
The petition read: “I, Honourable Sunday Olaifa, the Chairman of the Peoples Democratic Party of Oshodi/Isolo Local Government Area, on behalf of myself and the entire members of PDP, use this onerous opportunity and medium to express our dissatisfaction over the conduct of the current electoral officer in Oshodi/Isolo LGA for being partisan and moving the machinery of INEC in favour of the members of the APC in Oshodi/Isolo LGA area.
“We are reliably informed and we verily believe it to be true that one Akanji Israel, the electoral officer posted to Oshodi/Isolo LGA for the purpose of the election had been found wanting and having an unholy alliance with the members of the APC, particularly Honourable Ariyo Muse, the current Executive Chairman of Oshodi/Isolo LGA of Lagos State to fashion out the moralities and the methodology to perfect their rigging strategies in the forthcoming election in the favour of the APC in his domain.

“We are further reliably informed that the said Akanji Israel, the Oshodi/Isolo LGA electoral officer, on Thursday, the 14th day of February, 2019, held a crucial meeting in Oshodi at No 23, Seinde Calisto street, by Marble Field Hotel, with the following high profile of the APC. They are inter alia: Honourable Akeem Olushola Shokunle, the current and serving Lagos State House of Assembly member representing Oshodi/Isolo constituency I under APC, seeking reelection in the forthcoming election; Dr. Bashiru dawodu, the APC Federal House of Representatives member representing Oshodi/Isolo Constituency I, and Honourable Muse Ariyo, the Executive Chairman of the Oshodi/Isolo LGA, among others.
“We were also informed that on Tuesday, the 19th day of February, 2019, the duo of Honourable Muse Ariyo and Akanji Israel, the Oshodi/Isolo LGA, went to the Federal Special Anti-Robbery Squad (FSARS) located at Adeniji Adele, Lagos Island, to give false information to the Police formation against the leadership and members of the PDP as a tool to oppress, intimidate and molest the PDP members and their supporters, hence to evacuate, incite public disturbance during the election, thereby disrupting the electoral processes.
“Furthermore, we are informed the said Akanji Israel short-changed the already trained ad hoc electoral staff for the forthcoming election with APC card-carrying members, in order to perpetuate their perfected rigging arrangement as against the oath of his office, equity and a good conscience. This fact can be verified through the ad hoc staff trained and trainees.
“To our surprise, the electoral officer who is supposed to be an unbiased umpire descended so low and sold himself cheaply to the APC machineries for the purpose of monetary gain, thereby betraying the confidence reposed on him and his exotic office; a pathetic situation foisted upon our members, not knowing where to run to for justice in these circumstances at this crucial time of the election. We are, therefore, constrained to run to your esteemed office as a matter of urgency to curb the excesses and unconstitutional and illegal dealings.
“We urge the electoral commission to call for the immediate redeployment of the said Akanji Isreal from Oshodi/Isolo LGA, and also the security agencies to investigate his unholy act.”