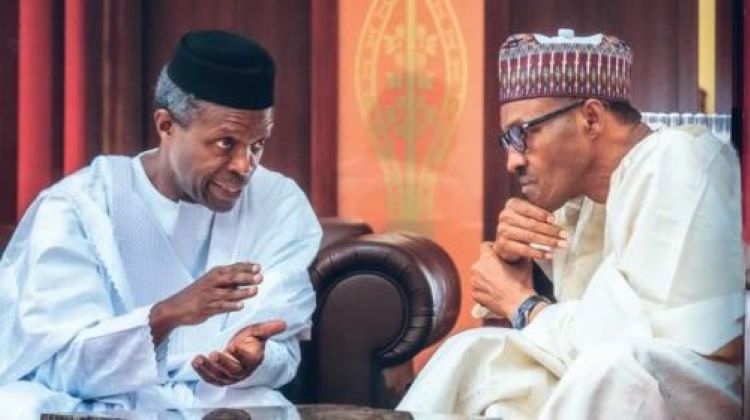 Eventually, Nigeria’s Vice President, Professor Yemi Osinbajo has finally told  President Muhammadu Buhari that he would be contesting for the 2023 presidential seat.

Daily Trust credible sources said the VP has told the president of his desire to take over from him at the expiration of his tenure in 2023 to consolidate the achievements they recorded since they took over from the opposition PDP in 2015.

With the intent, which had not been made public, the vice president will struggle for the ticket of the ruling All Progressives Congress (APC) with the likes of Asiwaju Bola Ahmed Tinubu who had a few months ago visited the Presidential Villa where he told Buhari of his intention to succeed him.

There are reports that the Minister of Transportation, Rotimi Amaechi, the CBN Governor, Godwin Emefiele and the Ekiti State Governor, Kayode Fayemi would also vie for the presidency even as the Minister of Labour, Chris Ngige had said he would soon join the race.

Senate Chief Whip, Orji Uzo Kalu, and Senator Rochas Okorocha have all declared their interest in the presidency on the platform of the APC amid speculations that some aspirants from the North would soon join the race.

“Certainly, VP Osinbajo has told the president that he wants to succeed him,” one of our sources said.

“They told him not to allow a third party to tell the president so that the ambition will not be misconstrued,” he said.

Another source said when Osinbajo approached the president with the story, Buhari was not surprised.

“Buhari smiled in his usual characteristic manner…he listened to the VP carefully and while responding, he gave him the green light and wished him well without giving him any commitment or assurance of supporting him ahead of other contenders.

“He blessed the intention just the way he blessed Tinubu when he visited him in the Villa and unveiled his plan to vie for the presidency.

“And I think the president is being careful. Remember what he said while granting an interview to national television.”

Though Osinbajo, a lawyer, politician and pastor, is yet to declare his intention to run for the office of president in 2023, many support groups and individuals have sprung up rooting for him.

The groups have been going around the country and sponsoring adverts in print and broadcast media urging the vice president to contest.

Another source said recent happenings indicated that Osinbajo will “Definitely slug it out with Tinubu and others for the APC ticket.”

He said, “The projection in certain quarters that the VP will not contest against Tinubu is now over. The two of them who are from the South-West would confront each other. They both have their support bases but Tinubu, of course, is more of a politician than Osinbajo. He has more support base across the country but that notwithstanding, the truth is that whoever the president supports would surely have an upper hand,” he said.

The vice president on Sunday postponed his planned meeting with all the state chairmen of the ruling APC who had converged on Abuja.

The meeting would have been the major contact of the VP with party chieftains from across the 36 states of the federation and the FCT.

Sources said the meeting was planned ahead of Osinbajo’s formal declaration for the presidency, which would have put paid to all speculations around his presidential ambition.

Multiple sources said the meeting planned to hold today (Monday) at night was shelved because of a directive from the villa.

It was learnt that accommodation had been reserved for the state APC chairmen while some of them had already arrived in Abuja ahead of the meeting before it was abruptly shelved.

APC sources in Lagos, Kano, Enugu, Kaduna, Osun, Cross River, Adamawa, Bauchi, among others, said they were aware of the meeting with Osinbajo and had mobilised for it.

A member of the APC in Kaduna who is familiar with the development said the meeting was shelved after rumours began to fly that the vice president was planning to use the chairmen to promote his political ambition.

The APC Chairman in Cross River State, Barrister Alphonsus Ogar Eba confirmed that he was invited to Abuja to attend the meeting.

He said he was in Maiduguri, capital of Borno State attending a colleague’s social event when he received the invite.

The Bauchi State Chairman of the APC, Alhaji Babayo Ali Misau, through the Publicity Secretary of the party, Adamu Aliyu Jallah also confirmed that he was invited for the meeting with Osinbajo.

A credible source within the APC in Adamawa State told our reporter that the state Chairman of the party, Ibrahim Bilal was in Abuja to attend the meeting.

A party source in Kano told our correspondent that their Chairman, Abdullahi Abbas, was also in Abuja.

We don’t know why meeting was postponed – Chairmen

The APC chairmen in Lagos and Enugu who confirmed that they were invited for the meeting with the VP said they don’t know why it was postponed or when it will eventually hold.

Lagos Chairman, Cornelius Ojelabi, who said Osinbajo as their principal had the right to meet with them, added that it was unhealthy to speculate the purpose of the invitation. He noted that the outcome of such a meeting would be communicated, whenever it was held.

When asked if the meeting was convened by the VP to declare his intention to seek the presidential ticket of the APC, Ojelabi said Prof Osinbajo had the right to aspire for any position.

“He has the right to contest but the members of APC will decide who they are going to field as their candidate,” he said.

He said Lagos APC was supporting the aspiration of Asiwaju Bola Tinubu because the former governor of Lagos state was the only aspirant from the South West who had declared his intent to run for the office of the president in 2023.

His counterpart in Enugu, Ugochukwu Agballah, who said he was on his way to Abuja when he heard of the postponement, added that he can’t pre-empt the purpose of the gathering.

“I am not an aide of the VP, I don’t know if he is going to use the meeting to announce his intention. He might have also called the meeting to resolve the issues in the party, so it is not good to pre-empt or speculate,” he said.

Sources in the APC and the Villa said the Osinbajo’s meeting with the state chairmen was halted at the last minute at the instance of President Buhari.

One of them said, “You know that Buhari is in London and he had hosted many interest groups from the government and the party.

“Of course, there was clearance for the meeting but after the president was briefed on the uncertainty around the party and pressure on the polity, he was advised to give directive for the meeting not to hold.”

But another source said the scheduled meeting was not on Osinbajo’s ambition.

He said, “The vice president was directed to meet with the chairmen because of the crisis bedevilling the ruling party. They supposed to discuss some contentious issues ahead of the NEC meeting coming up on Thursday preparatory to the national convention on March 26.”

However, a reliable source at the APC headquarters said the postponed meeting was fixed for 8:30 pm and it was meant for the VP to get the support of the state chairmen ahead of his declaration for the presidential race.

“The Vice president knows that they are key delegates at the convention. He (Osinbajo) will declare for the presidential race. As long as President Muhammadu Buhari is alive, he will get the APC presidential ticket,” he said.

Contacted to comment on whether the VP had gotten a green light from President Buhari to declare for the presidency, Osinbajo’s spokesman, Laolu Akande said, “Like I said last week, any information regarding the activities of the vice president will be communicated officially.”

When asked to confirm if the vice president planned to meet with state party chairmen, he said: “I don’t know about it. But I will find out.”

VP in a fix over Tinubu, RCCG

Daily Trust reports that apart from pressure in some quarters within the APC, the VP was also in a dilemma because of his relationship with Tinubu.

A chieftain of the party, Senator Abu Ibrahim had told the Daily Trust that Osinbajo would find it difficult to contest against Tinubu.

He said that Asiwaju and Osinbajo had come a long way. “Osinbajo was Tinubu’s commissioner in Lagos State. It was Tinubu who picked him for the vice presidency and so, he will not be in contest with him,” he said.

Some sources said the creation of the directorate for politics and governance recently by the Redeemed Christian Church of God (RCCG), where Osinbajo is a senior pastor, had raised an eyebrow in many quarters.

They described the development as a move to use the church’s large followership across Nigeria and beyond to actualize the VP’s presidential bid.

But the church had said that the new directorate was expected to help mobilise support for members of the church who were into politics.