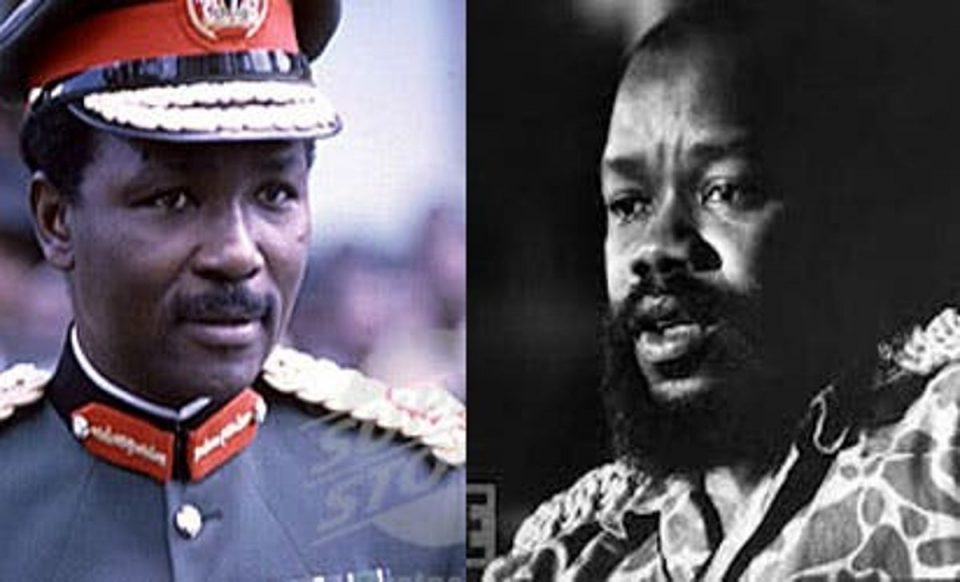 As the Indigenous People of Biafra, IPOB, held its 53 Anniversary on Saturday globally, the Igbo extract is seeking for the implementation of Aburi accord of 1967 which Odumegwu Ojukwu and Yakubu Gowon reached.

A protestor gestures as he takes part in a demonstration in Durban, South Africa, on May 30, 2019 during a Freedom March for Biafra held worldwide and organised by the Indigenous People of Biafra (IPOB) to mark the anniversary of the unilateral declaration of independence in 1967 that sparked a brutal 30-month civil war in Nigeria.

As some sections of the South-East geopolitical zone of Nigeria mark the 53 anniversary on the declaration of Biafra Republic, a Senior Advocate of Nigeria, SAN, Chief Mike Ahamba has said that time has come when the people of the country should revisit the Aburi Accord.

Aburi Accord was reached in 1967 at a meeting attended by delegates of both the Federal Government of Nigeria (the Supreme Military Council) and the Eastern delegates, led by the Eastern Region’s leader Lt. Colonel Ojukwu.

The meeting was billed to be the last chance of preventing all-out civil war. At the Aburi Accord, it was agreed that appointments to senior ranks in the police, diplomatic, and consular services as well as an appointment to superscale posts in the federal civil service and the equivalent posts in the statutory corporation must be approved by the Supreme Military Council.

But the actors in the meeting especially the Nigerian side led by then Lt. Col. Yakubu Gowon, allegedly refused to implement the resolutions which gave rise to the declaration of Biafra Republic by the then Eastern region under Lt. Col. Chukwuemeka Odimegwu Ojukwu who was the then military administrator of the region on May 30, 1967.

Speaking to Sunday Vanguard, Chief Mike Ahamba, SAN, who was the Minority Leader of old Imo State in the Second Republic (under National Party of Nigeria, NPN), said that all the things that led to the declaration of Republic of Biafra 53 years ago by Ojukwu are still taking place.

Ahamba said that though the political actors in the country we’re supposed to learn something from the war to ensure that it doesn’t occur again, there is no evidence that those in power learned anything going by their actions.

He said, “They (leaders) know that a lesson ought to be learnt but I doubt if they have learnt anything.

“So, I think the best way to kill that Spirit of cessation is not to perpetuate what caused that one as they are doing now, this place (South East) is being neglected, the only thing that is not happening now is the pogrom, every other thing is still in place, I think Nigeria should rethink and not allow anything that can take us to that path again to happen.”

He further said that the South East is being treated by the Federal Government” as non-existent in the affairs of the country.

“The only thing that is not existing right now is the open pogrom even though there is killing through another source but there is also illegal killing all around.

“So, those things are provocative action that can lead to civil war and I repeat that every genuine Nigeria should pray to God that nothing that can bring us to that path again doesn’t happen.”

“For example, you have a situation which we have something they called test run where they are paying people N20,000 and it remains in four states for four years, that is not right.

“In recent time when some money was being distributed from a loan to be refunded by everybody and a particular segment of Nigeria as reported was not included in the distribution, that is not fair.

What is your motto? Our motto talks about fairness, freedom and justice, are we practising it? That is a problem.

“So, I think we should consider these things and look at the law that talks about geographical spread so that whenever Nigeria will take any serious decisions, all parts of the country will be involved in it.

“We need to get a little bit apart to be closer, and that can be done by restructuring.

A situation where you clamp people who started as a federal unit. True federalism demands that there is a bit of autonomy in the state and a few people taking care of themselves in the state.

“But where everybody tries to feed on the same pot, everybody will go home and sit down and wait for the others to cook and they will come to the table and head the table, this is what is happening in Nigeria today.

“We have to work to develop our area to be able to make an input at the centre, not the centre giving handouts to the areas, it will develop laziness.

“I believe that we have to pull apart a little in order to be closer in the country and that is why I am always talking about, let us revisit the Aburi Accord. ”

And those who said that there should be no restructuring of any sort whatsoever in this country because they presently have an undue advantage should know that God has created human beings and refused to tell him what will happen in future. ”

After all, even in marriage when a couple is quarrelling too much, there is what is called judicial separation, you don’t divorce them.

You make an order of judicial separation, they stay aside for sometime and after some time, you see them coming together again as husband and wife more closely than before

“And for those who think that they are in charge now or responsible, things cannot change let them know as our people normally say, it is not the person who calls police that usually wins a case, somebody who didn’t call the police can win.”