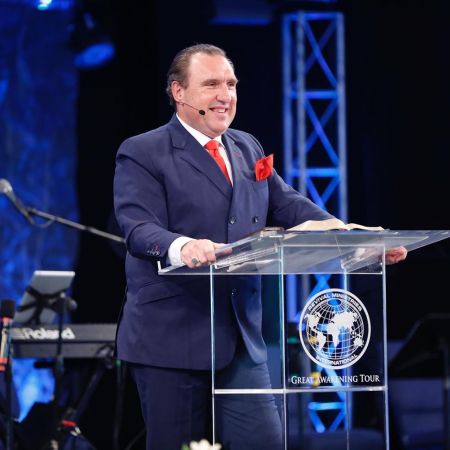 Howard-Browne, who was among evangelical leaders who laid hands upon and prayed over President Donald Trump in the Oval Office in 2017, dedicated most of his Sunday sermon to mocking fears about the spread of the coronavirus and calling it a “phantom plague” designed to terrify people into receiving vaccines that will kill them, which he claimed was all part of a plan laid out in a 2010 document called “Scenarios for the Future of Technology and International Development” produced by The Rockefeller Foundation and Global Business Network.RODNEY HOWARD-BROWN ON CORONAVIRUS….

“I have talked about what is coming for more than ten years. The people in our church are ready for this. Therefore, nothing of what is happening now is a surprise to me.

Every god of America has fallen – sports have fallen, Hollywood has fallen, television shows canceled. Even the god of some mega churches fell, these churches are empty today. I have warned for years that churches will disappear in one night.

I hold in my hands the Rockefeller Organisation document, which was published in 2010. Here is the script that we met today.

What is happening now is not an accident; everything was planned. Bill Gates talked about the pandemic four years ago. The document is called “Scenario for Future Technology and International Development,” 53 pages. It says here that the result of this scenario will be:

“20 percent of the world’s population will be infected. People’s mobility will be blocked, airports will be closed. Sports events will be canceled, shops closed, theaters closed, churches astounded. A pandemic will produce shortages, including disinfectants and toilet paper. If people refuse the vaccine, they will not be allowed to travel. Political assemblies will be illegal, public protests will be banned. Martial law will be introduced and the new global control system will come into effect. People around the world will be open to sharing their security rights”.

The plan was to use a pandemic to control the planet. Not just a virus is enough for this; fear is enough for this. This week I talked with different people from about thirty countries, with pastors of thousands of churches, and none of them know a single person infected with coronavirus. I do not say that he does not exist, I say that he is a weapon to control people with fear. Media is part of the whole process because they are designed to instill fear 24/7 on people.

Coronavirus has been in America since last year. I saw a request from the Center for Disease Control about hiring people in quarantined medical facilities in 19 major US cities. The request was made in November 2019. This is all fraud and a means of control by which they want to reduce the population.

What is written in the book of Revelation is printed. Globalists lead us to a single government, a single monetary system and the coming of antichrist. And I believe that God raised Trump to suspend it.

There are three possible scenarios. The first is the beginning of the last days according to the book of Revelation. But I am inclined to believe that this is a great test.

Second, the World Health Organization will try to promote the globalist plan and force everyone to make a fake vaccine. The vaccine is already there. And they will kill a lot of people with their vaccine (just like people die from a flu vaccine), because the goal of the vaccine is to reduce the world’s population.

And the third scenario, which I am inclined to, is that God will overturn all this on the heads of globalists, using President Trump, and will close it all over the next month. And all that they planned will come to zero.

This is what we will pray for – that God will drive the wheels out of the chariots of the pharaoh. Within a week or two, I will find out if the third scenario is accurate, and I’ll let you know.

At the moment, I do not advise people to fly to other countries, because changes may happen in the next couple of weeks. I encourage everyone to stock up on water and food until the end of April.

And I will be storing food for our church, because I have to take care of the church. I want you to know that the church is for you, and here you can feel protected. I don’t know how crazy the next two to three weeks will be, but you don’t get crazy.

Stay strong in the Lord, remembering that He will never leave you. There is peace in my heart. At the heart of my assistant Eric is peace. This is the time when we will see cities and nations shocked by the glory of God. This is harvest time.

This is not a time of religion and playing a warm church, it is a time of radicals – such as Elisha, Elijah, Paul … And this is also the time when you take away the wealth of this world. This is the time of the transfer of wealth into the hands of God’s children.

I forbid all fear in your lives! Stop listening to lying media! You can choose to listen to the media and scamper in fear, like hens that have their heads chopped off, or stand on God’s word, which will keep its people at this time.

As a Democrat, I Fought a Good Fight for the Nigerian People- Atiku