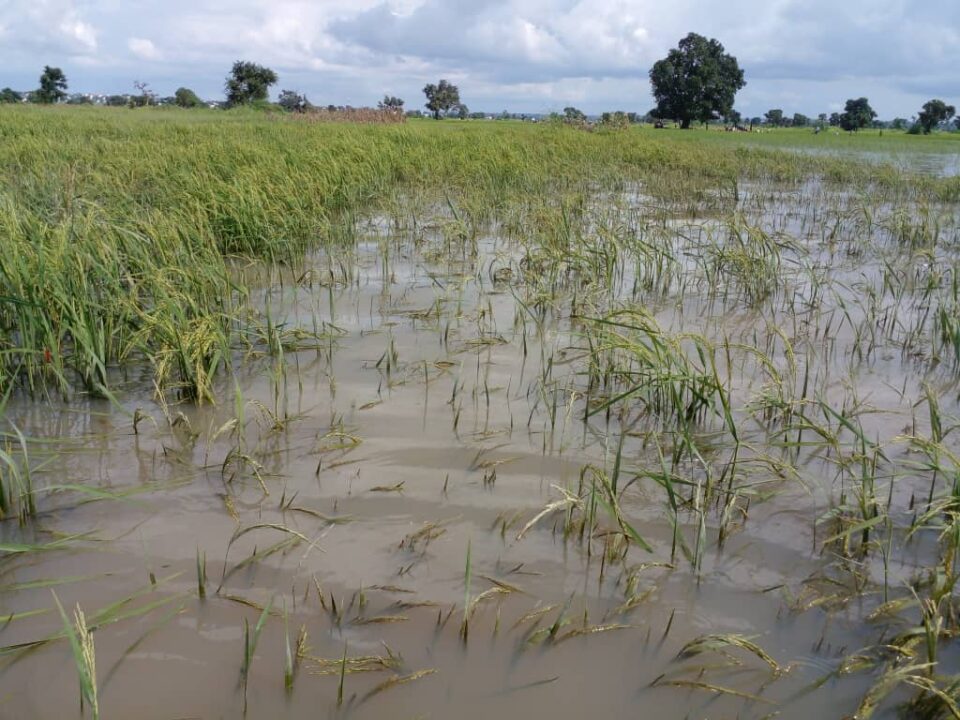 Flooding has destroyed a large expanse of rice farms in five local government areas in Taraba State covering more than 250 kilometres on boundaries with Adamawa and Benue states.

Daily Trust findings revealed that the affected areas are the hub of rice production and 90 per cent of rice farms located on both sides of river Benue in the area was destroyed by the flood.

A farmer in Kwatan Nanido, Adamu Saidu, told Daily Trust that he planted seven bags of rice seed and was expecting to harvest more than 1,000 paddy rice but more than 85 per cent of his farm was destroyed by the flood.

Another farmer, Rita John, said she took a loan of N400,000 from one of the rice processing companies to plant rice and hoped to pay with paddy rice at the harvest but her hope of paying the loan and making a profit was dashed by the flood.

She appealed to the federal and Taraba State governments to assist farmers affected by floods in the state.

The chief of Mutumbiyu, Justice Sani Muhammed (rtd), said it was a double tragedy for rice farmers in his domain.

He lamented that the farmers who ran away from the hinterland to the riverside for their farming activities because of bandits’ attacks were at a great loss.

The monarch disclosed that four of his rice farms were destroyed by the flood and appealed to the government to assist the affected farmers with rice seeds, water pumping machines and fertiliser to embark on rice farming during the dry season to get relief.

The state chairman of the Rice Farmers Association, Tanko Bobbi Andami, said he was in Abuja and that the association had started compiling lists of affected farmers and the extent of damage in monetary terms.

Meanwhile, the state government has appealed to the federal government and North East Development Commission (NEDC) to assist victims of flood disasters in the state.

The Taraba State Commissioner for Agriculture, Dr David Ishaya, while commenting on the destruction of rice farms said the disaster could only be compared to that of 2012.

He added that the scope of destruction was very big and required assistance from the federal government and other agencies to support the affected farmers.

African Continent Gets Below 1% from 2.1bn COVID-19 Vaccine Doses Globally