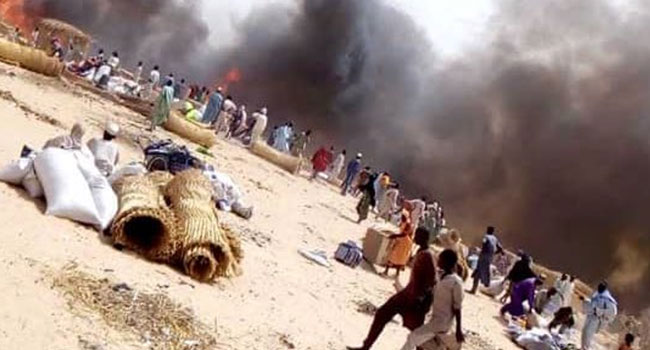 No fewer than 1,613 houses at the Muna garage Internally Displaced Persons (IDP) camp in Maiduguri, have been razed by fire.

It was gathered that two internally displaced persons died in the inferno on Monday.

Chairperson of the Borno State Emergency Management Agency, Yabawa Kolo said the incident happened on the eve of the Eid-El-Fitr.

Governor Babagana Zulum has visited the camp to ascertain the level of destruction caused by the fire.

Zulum said the incessant fire incidences in makeshift camps further underscores why camps should be completely closed down in the state.

The governor revealed that the federal government has approved the construction of ten thousand housing units across the state, with the affected population in mind.

He said the construction will commence immediately funds are released to bring an end to the idea of living in temporary shelters.

In the first quarter of this year alone, several IDP camps in Nganzai, Ngala, Mafa and Monguno local governments were gutted by fire as a result of the clustered settlement of the people.

South Sudan: AfDB and WHO hand over vehicles to support Covid-19 response