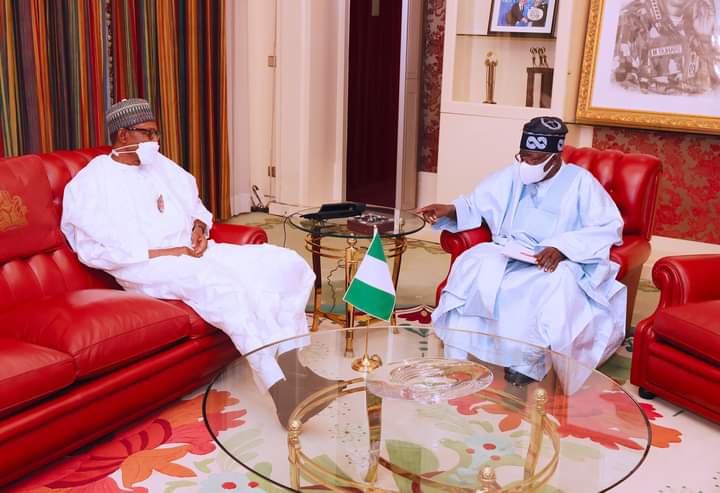 The All Progressives Congress (APC) chieftain, Asiwaju Bola Ahmed Tinubu, has declared his willingness to run for the ,2023 Presidential election, lauding President Muhammadu Buhari as a true democrat for not attempting to stop his presidential ambition.

The APC stalwart stated this on Monday after a meeting with the president at the State House in Abuja.

Tinubu, who was responding to a question regarding what Buhari told him after he informed the president of his intention to run for the presidency in 2023, said, “he didn’t ask me not to attempt and pursue my ambition”.

While stressing that the move was a lifelong ambition, the former governor of Lagos added that when one is “running a democratic dispensation, he must adopt the principles, values and the virtues of democracy”.

Tinubu, however, explained that while he has informed President Buhari of his intention, he has yet to inform Nigerians of his intention to succeed the Daura, Katsina State-born leader.

In recent times, there have been a number of support groups, drumming up support for Tinubu’s ambition, there have also been those urging Vice President Osinbajo and Governor of Kogi State to run for the same office, but the APC chieftain said it is not yet time to discuss individuals.

“I must discuss myself. I have the confidence, the vision, the capacity to rule, build on the foundation of Mr. President, and turn Nigeria better. I have done that with commitment and unyielding you know, in Lagos State”.

He said: “You’ve seen that experience and the capacity to turn things around and that is what we are doing. You know, the confusion, the drift of the past in PDP is being corrected. And you can’t take away from that”.

“As we are today, go back to the data on how many barrels of oil were we producing when we first came in and what it is today.

“Let us think back, let us be intellectually inquisitive as to the past and the present and what the future holds for Nigeria,” the former lawmaker urged Nigerians.

When asked about what Nigerians are to expect of him if he becomes president, Tinubu replied that it was not yet time for a manifesto.

Nevertheless, he addressed the issues of direct primaries and the APC convention and did not fail to speak about those who are of the opinion that being a kingmaker fits him more than throwing himself into the ring.

“First of all, the National Assembly and the president must be encouraged to review and review again. Whatever they come up with electoral amendment is what we must comply with.

“There is no unlimited elasticity in what we face, because we have to plan and plan well, and be able to manage the time effectively.

“The great roadmap to success is the ability of a leader to do what he must do at the right time that it should be done. So for the electoral amendment point, we will still look at that collectively.

“And it is our country. It’s our democracy. We had adopted it and we will push it rigorously,” he answered while addressing the electoral amendment.

Answering those who say he should remain a kingmaker, Tinubu said, “I’ve never seen the cap of a kingmaker before. That is the truth. And I’ve never seen where it is written in the rule book anywhere in any country that a kingmaker cannot be a king unless you commit murder.

“So, whatever is your attribute is your own opinion. For me, I want to pursue my ambition without the title of a kingmaker. You can write your literature and your story based upon your own perception,” he declared.

Giving his opinion about the APC Convention and rifts within the ruling party, Tinubu assured that while he is not the leader of the party, he is certain that a convention will hold.

He further guaranteed that the APC will hold its convention in peace, adding that the congress will be conducted properly.