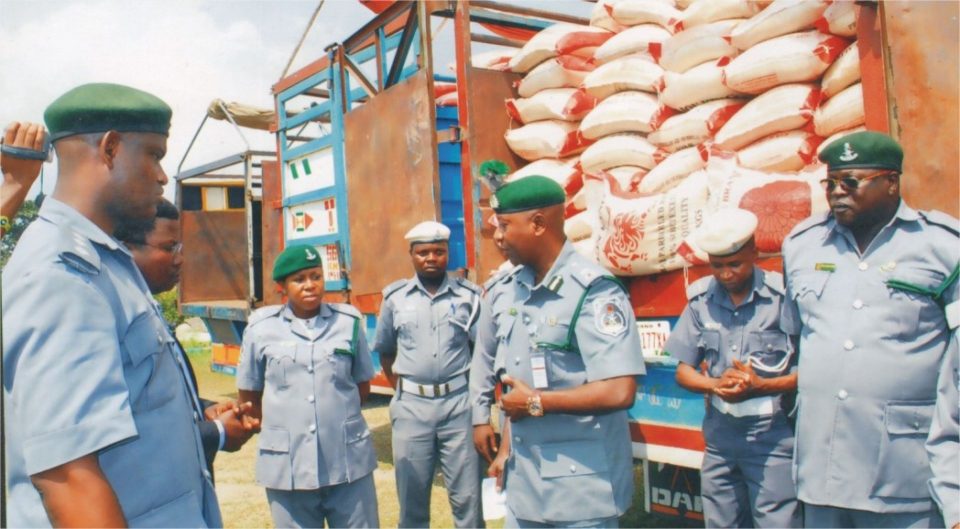 No fewer than fifteen people have been arrested by the Nigeria Customs Service for illegally re-bagging foreign rice at the borders.

The Comptroller of Customs in Adamawa and Taraba States Command, Kamardeen Olumoh, disclosed that when he led Journalists to the scene of the crime at a warehouse in Yola, the Adamawa State capital.

He said the suspects were found with 900 bags of rice with duty paid value of N14.5 million.

Olumoh explained that operatives of the command busted the warehouse in conjunction with others from the Federal Operation Units and Strike Force, as part of efforts towards sustaining the fight against smuggling in the country.

He revealed that 15 people, including the manager and labourers at the warehouse, were rounded up by the security operatives while carrying out their nefarious act.

Thereafter, the comptroller proceeded with the reporters to the Customs Headquarters in Yola where it has seized a truckload of grains intercepted by operatives along the Mubi-Yola Road.

He said investigation revealed that the truck was also carrying foreign rice re-bagged as local rice concealed under bags of beans with a duty paid value of N10.3 million.

Three suspects were also arrested in the process and all the arrested suspects would be prosecuted, Olumoh added.

While the Nigerian Government has since closed its borders with neighbouring countries, the comptroller described the activities of smugglers as sabotage.

He, therefore, warned smugglers that Adamawa and Taraba States remain no go areas for them as the Command would soon embark on raiding markets in search of smuggled foreign rice.

Olumoh also appealed to market heads to caution their members against the sale of foreign rice as a way of supporting local farmers who have the capacity of feeding the nation.