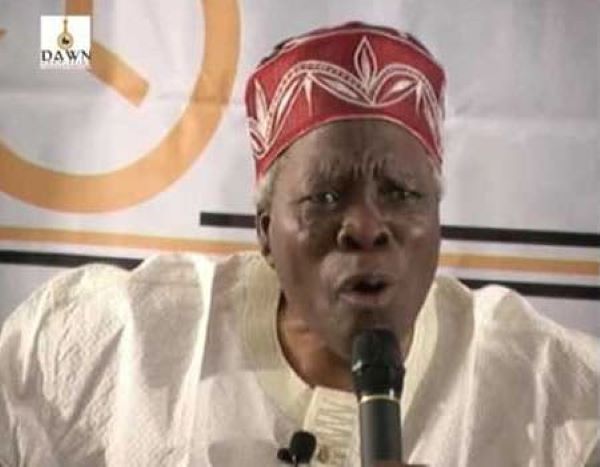 In what could be likened to an innovative way of fighting and combating crimes in a modern society, a foremost Historian and Leader of the Umbrella body of Yoruba Self-Determination Groups, Ilana Omo Oodua, Professor Banji Akintoye, has unveiled a Mobile Application designed to track Kidnapped Victims and Expose Danger anywhere in Yoruba Land.

Akintoye said: “Yoruba people will use their intellectual power to fight for freedom, exit Nigeria”

The Mobile Application and Alert System, named PAJAWIRI, can also expose criminal elements wherever they are with their victims once the victims have the application installed in their phones either on or off.

The Security System also has another system called AFINIHAN that can be used by those without android phones to link up with those with the full application.

Speaking at the unveiling ceremony held in Ibadan, Oyo-State, Akintoye, who joined the event virtually, said the emergence of PAJAWIRI is an evidence that the Yoruba people are too intellectually sophisticated to be subdued.

“We have now proven to the world that we cannot be captured nor be subdued. We are too intellectually sophisticated to be subdued.

“It is these Innovations and intellectual powers that we will deploy to get ourselves out of the quagmires of Nigeria”.

On the attendant benefits of PAJAWIRI, Akintoye, in a statement by his Communications Manager, Mr. Maxwell Adeleye, said “every person in  possession of the Pajawiri app on their telephone, will be able to activate the APP instantly, whenever they find themselves in danger.  By activating the app, they will be able to alert their families, their friends and their neighbors that they are in danger and that they need help.

“In that way, no Yoruba person needs to be alone anywhere on their farms, schools, market places, shops and anywhere else. Any person who finds himself threatened by danger and who is in possession of Pajawiri will be able to alert other persons for help.

“In short, Yoruba people today, are able now to enjoy security individually and collectively through the use of the APP known as Pajawiri.

“The Ilana Omo Oodua Worldwide owes our engineers who have “put this together an enormous debt of gratitude. The Yoruba people also owe a lot of gratitude to the umbrella body of Yoruba Self-determination groups, “Ilana Omo Oduduwa” for all the encouragement and support that they have given to these engineers.

“After that, those who choose to continue to enjoy the protection of Pajawiri will be able to do so with an affordable monthly subscription.  That is for those of us who have Smart phones(android, iOS or IPhone). For those of us who do not have smart phones (android, iOS or iPhone), there has been designed a  hand-held alert device named AFINIHAN to work equally as effectively as the Pajawiri on the IPhone.

“AFINIHAN a tiny hand-held device that is able to perform wonders. This tiny device has been efficiently tested and will be available for purchase at a small affordable price.

“The purpose of all these technological provisions, is that the Yoruba nation must carry all its people along in this provision of security.”, Akintoye, remarked.

Speaking on the ideal features and benefits of the APP, the Coordinator of the PAJAWIRI PROJECT, Engr. Ayobami Abolaji, explained that the Pàjáwìrì App is  a warning system for warning and protection through an alarm and alert system that will generate protective action for the community and each individual user.

The United States based IT expert said “The Pàjáwìrì app is designed to provide a technological solution or a system that
allows people to warn others of impending dangers and arouse established Response
Teams in the communities to stop and prevent various vices such as: Kidnapping,
Raping, Armed Robbery, Arson, Theft, Accidents, Murders and Banditry against app users and their community members.

“The Pàjáwìrì App is a technologically savvy information and communication application that Alerts and locates the source and flash points of dangerous security breaches where unchallenged massacre of valuable Human Lives and Properties are perpetrated. The Pàjáwìrì App Proffers a modern day means of Curbing or permanently alleviating the fears that has gripped the inhabitants
of any geographical location and settlements once and for all.

“The Pàjáwìrì App was designed to be activated through a referral process only, in order to be able to know the identities of the app users and detect suspicious and
criminal elements disguising as real users. It will be free to download by any users
and will be operational after the referral activated the New user to have the referral
identification.

“AFINIHAN is an Android and I-Phone (iOS) compatible application device that sends
alert signals to the connected phone systems. It is a mobile alarm system that allows those without hand held phones to connect to and alert those with the smart phones and computer devices set up at data command and control centers established at various perimeters in the geographical entities that the app is operating from,”, Abolaji, stated.

Present at the unveiling of the app were Pioneer Commissioner for Education in Osun-State and Immediate Past Chairman of Ilana Omo Oodua, Professor Wale Adeniran, immediate past General Secretary of Ilana Omo Oodua Worldwide, Arc. George Akinola, University Dons, Kayode Akinwande, Akinsola Adejuwon, amongst others.

How To Safeguard The Planet