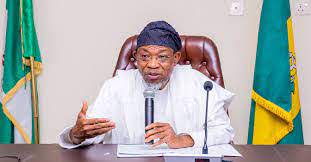 The Minister of Police Affairs, Rauf Aregbesola, Thursday, reassured Nigerians that the government would end terrorism, banditry and other security challenges in December.

He had, at a joint security briefing in Abuja last Monday, given a similar assurance.

He said the country was moving to the phase of consolidation as directed by Buhari.

He said the council was happy with the security agencies’ performance and the gains recorded so far.

“We’re moving to the phase of consolidation of all those gains, such that by December, as ordered by the chairman of the council, the president, which he has said to all Nigerians before now, that we’ll put, essentially, most of the challenges of banditry particularly, insurgency, kidnapping for ransom, criminalities of that nature far behind us,” he said.

Aregbesola said the council declared the National Taskforce on the Prohibition of Illegal Importation/Smuggling of Arms, Ammunition, Light Weapons, Chemical Weapons and Pipeline Vandalism (NATFORCE) illegal and asked those behind it to disband it or be forced to do so by security agencies.

A bill seeking to legalise NATFORCE is currently being considered in the National Assembly amid opposition from security experts.

Aregbesola said the government never create NATFORCE with any legislative instrument or power.

He said the directive for NATFORCE’s disbandment also affected all bodies that impersonated security agencies and committed illegalities across the country.

Police Affairs Minister, Mohammed Maigari Dingyadi, said: The issues of unlawful weapons, arms and ammunition, are being properly managed by the Office of the National Security Adviser and we don’t think any private organisation should come into these security issues and try to bastardize them, and that’s why we’re insisting that they disband themselves or government will disband them.”

Aregbesola said the government was committed to getting the kidnapped train passengers out of captivity.

On the implications of the arrest of the hostages’ negotiator, Tukur Mamu, Dingiyadi: “Maybe you only came to know Mamu because he made himself known.

Dingyadi, while reacting to a question on the resignation of the Police Service Commission’s chairman, Musiliu Smith, said he resigned on health grounds.