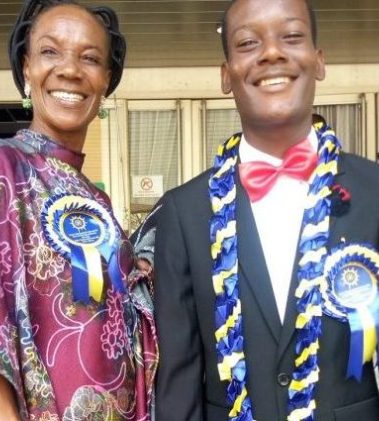 Peter Arotiba and his mother at the moment of joy

Mr Peter Arotiba, who emerged the overall best student in the 2018 West African Examination Council, WAEC, has disclosed the secret of his success.

His distinctions in the eight subjects was adjudged by WAEC as best among other candidates in the same category.

Arotiba said: ”The sacrifice made to achieve this feat was the high level of discipline during examinations. During examinations,  I let go of other programmes I enjoyed and concentrated fully.

“I have a natural passion for reading, so studying was not an issue to me. When you work hard and depend on God’s grace, one will never be disappointed.”

He, therefore said that achieving success is a function of so many factors, the chief of which is God’s grace and hard work.

Arotiba, 18, hail from Kogi State. Due to his academic excellence in 2018 WASSCE, he was awarded the National Distinction and Merit Award by the West Africa Examination Council (WAEC).

He was also honoured in March by WAEC as the best in West Africa.

Arotiba is presently studying Medicine and Surgery at the University of Ibadan. He had his secondary school education at the Nigeria Air Force Secondary School, Ikeja, Lagos State.

On Thursday in Abuja, Arotiba was recognised alongside two others at the opening of the 57th Annual Meeting of the Nigeria National Committee (NNC) of WAEC.

Coronavirus: Fall In Oil Price Dangerous to Our Country’s Survival