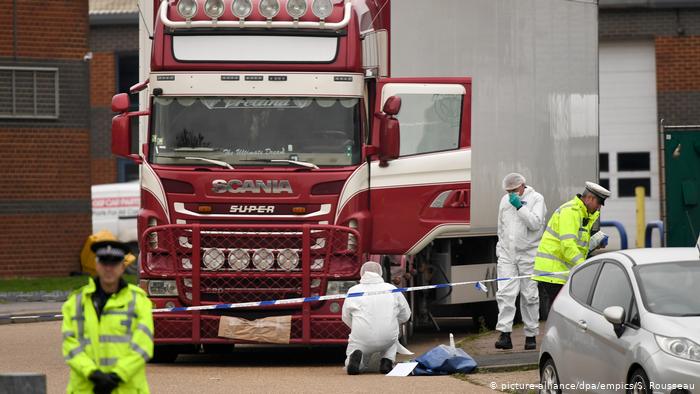 The 39 people found dead in the back of a refrigerated lorry trailer on Wednesday in UK were all Chinese nationals, ITV News has learned.

The truck The victims, all adults barring one teenager, were discovered in the early hours of Wednesday when the trailer was opened at an industrial estate in Essex.

Police have searched two addresses in Northern Ireland as officers continue to question a Co Armagh man over the discovery.

The two searches in Co Armagh on Wednesday night are believed to be linked to the arrest of the driver, who ITV News understands is 25-year-old Mo Robinson, from Portadown.

He remains in custody for questioning by Essex Police on suspicion of murder. There was no answer at the Co Armagh home of Mr Robinson’s family. Meanwhile, police have begun the process of trying to identify the 39 bodies.

Forensic experts have moved the lorry and trailer from the industrial site in Grays where the victims were found to a secure location at Tilbury Docks, where the bodies will be removed Detectives said the refrigerated trailer containing the victims arrived at Purfleet from Zeebrugge in Belgium at around 12.30 am on Wednesday, while the front section came from Northern Ireland.

The Belgian federal prosecutor’s office says it is clear that the trailer had come through Zeebrugge. In a statement, the office said the trailer was at the port for a short time before it was freighted to England.

The statement said it appears the container arrived in Zeebrugge on October 22 at 2.49 pm local time (1349 BST), and “left the port the same day in the afternoon”.

After arriving from Belgium, the lorry and trailer left Purfleet shortly after 1.05 am, and officers were called 30 minutes later after ambulance staff made the discovery at the Waterglade Industrial Park.

ITV News has obtained CCTV footage of the lorry driving towards the Waterglade Industrial Park minutes before the bodies were found. Source: ITV News

Deal With Corruption In Your Office, ASUU Tells AGF

International Job: FG Urges Nigerians to Apply for Position of Director- General of Islamic Centre for development of Trade