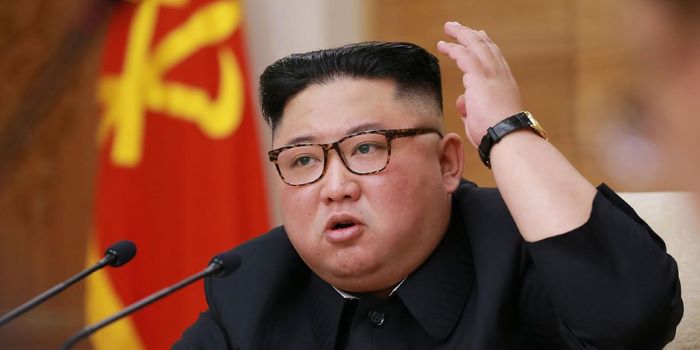 In a meeting of the powerful politburo of North Korea’s ruling party presided over by leader Kim Jong Un, he explained that the decision to resume “all temporarily suspended” ICBM tests is to boost the country’s military against a “hostile” United States.

According to the country’s Rodong Sinmun newspaper, they were looking to “examine the issue on resuming all actions, which had been temporarily suspended”, in an apparent reference to a self-imposed moratorium on the testing of nuclear weapons and ICBMs that began in 2017.

In recent months, Pyongyang has stepped up its rhetoric against the administration of US President Joe Biden while also conducting a series of ballistic missile tests, including what it has described as a new hypersonic missile.

Wednesday’s meeting took place following at least four missile tests this month that have triggered new sanctions from the US.

NK News, which specialises in covering North Korea, noted on Thursday that despite the recent tests, none have involved ICBMs.

But it said that North Korea featured its new ICBM, called the Hwasong-17, during a military parade in October 2020.

In a social media post, Jean Lee, a senior fellow at the Wilson Center, a Washington-based global policy think tank, described the latest pronouncements by North Korea as “ominous”.

The last time North Korea tested a nuclear bomb was in September 2017, and its last ICBM test was two months after that.

Those tests, during the administration of US President Donald Trump, led to an unprecedented summit between a North Korean leader and a US president.

Kim Jong Un met then US President Donald Trump in Singapore in 2018 and in Hanoi the following year, but talks collapsed over Kim’s demands for the lifting of sanctions. Talks on denuclearisation remain stalled.

Under the Biden administration, the US is putting pressure on the United Nations Security Council to extend international sanctions on North Korea. A closed-door council meeting is scheduled on Thursday to discuss the issue.

KCNA quoted North Korean officials saying that US threats were “getting ever more serious by the day”.

“Especially the present US administration persists in manoeuvres to deprive the DPRK of its right to self-defence,” the statement said referring to North Korea by its official name.

The meeting also noted that the US had been conducting “hundreds of joint war drills” with Seoul, while also “shipping ultra-modern attack means into South Korea” that “seriously threaten” the security of Pyongyang, the KCNA said.

During last week’s test of a hypersonic weapon, state media quoted Kim Jong Un calling on scientists to step up efforts to develop the North’s “military muscle” despite the devastating economic effect of sanctions, and a border lockdown imposed when the coronavirus pandemic began.

South Korea’s Yonhap news agency reported that Pyongyang could launch more weapons tests in the coming days and weeks to “further ramp up pressure on the US”.

North Korea is set to mark important anniversaries in the coming months, including the 80th birthday of Kim’s late father, Kim Jong-il, on February 16, and the 110th birthday of his late grandfather, Kim Il-sung, on April 15.

“The situation on the Korean Peninsula appears to be on the brink of returning to the vicious cycle of provocation and sanctions, like the one in 2017,” Yang Moo-jin, professor at the University of North Korean Studies, told the Yonhap news agency.

#RussiaUkraineWar: Each Country List Its Area Of Crippling Sanction Against Russia